YOU SPIN ME
a nostalgic romantic comedy
BOSTON CLASSICS #3
Narrated by Vanessa Edwin and Eric Michael Summerer
Rating:  4.5 Stars
Told in the first person.  Alternating persons.
Disclosure of Material Connection:  I received this book for review from the author. I was not compensated nor was I required to write a positive review. The opinions I have expressed are my own. I am posting this in accordance with the Federal Trade Commission's 16 CFR, Part 255: "Guides Concerning the Use of Endorsements and Testimonials in Advertising". 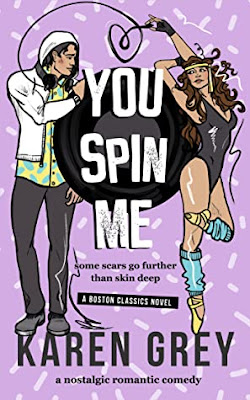 1988 doesn’t end well for Jessica Abraham. In just one week she turns thirty, loses her day job, and loses the role of Ophelia to a younger actress. Rallying, she goes after a part at a theater outside of the city, but the director’s plan to hide her beauty behind hair, makeup and wardrobe from Cosmo’s “Don't” column shakes her confidence to the core.

For the first time in her acting career, she won’t be able to rely on her carefully managed physical charms. Only her craft will count.

On a snowy night early  in January 1989, a woman calls into DJ Callihan Alonso’s alt-rock radio show at the end of her commute. He asks her to call back the next night, and the next, just so he'll know she’s home safe. There's something about her voice that has him wanting more, but the longer they talk, the closer she gets. Compromising each and every wall he's built around his heart.

If two lonely people fall in love over late-night phone calls, will meeting face-to-face make them, or break them?

In this heart-rending but happy-ending retro romcom, it may be the end of a decade, but it’s the beginning of a love story. 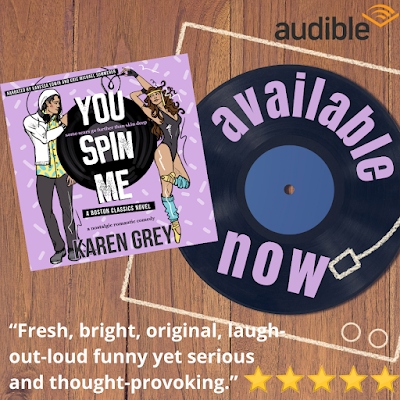 Put it on your Goodreads or Bookbub Want to Read list (and review it there, too!)

Listen to the playlist on Spotify: https://bit.ly/YouSpinMeplaylist

If you’re looking for a book that will get you to laugh with a side of romance then you may want to see what this book is about.  One thing that I love about this audiobook is the sound effects.  They add something to the story that I could not.  When I listened to the first book in the series, I was not prepared for the effects but I’ve finally gotten used to it.

This takes place back in time but not too far back.  It’s a time that I grew up in so it was funny to hear the jock mention my favorite band.  There were several other things that I recognized and they brought back some fond memories.  It’s a great book to reminisce with.  And how could I not love that it takes place in my home state.

I was impressed with the author taking on main characters that are less than perfect.  Jess has a learning disability and she has learned to adapt.  She also has a secret that not many people know about.  Cal’s issues are more physical.  His choice of profession is one that makes him comfortable. We also get to see his strength.  These two have you thinking about if they actually lived in our world, how much time has changed since then and that includes how people are treated.  Holding something inside is never a good thing.

The author also shows that love can come to anyone.  There’s the love a fan has for their favorite disc jockey.  There’s a person’s love for their profession.  Then we have the love for people that let us see what they have on the inside.  Depending on what’s going on in your own life, you may be able to understand some of what our main characters were going through.

The voice actors help us listen to the characters frustrations and other emotions that need to be let out.  I was impressed with how well Ms. Edwin does with male voices. She also does a great job in showing what Jess has to deal with.  Mr. Summerer does a great job at bringing Cal to life.  He helps us feel all the emotions that Cal is feeling.  This book was a great introduction if you’ve never listened to either of them before.  Both are on my to watch out for list – which has gotten a lot longer now. 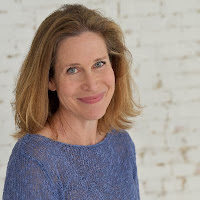 Vanessa Edwin is a multiple AudioFile Earphones Award and SOVAS Award winning audiobook narrator. She is also a classically trained actress and world traveler. There’s nothing she loves more than long rainy days which are optimal for nurturing her love of reading, drinking hot cups of tea, and dreaming of her next getaway.