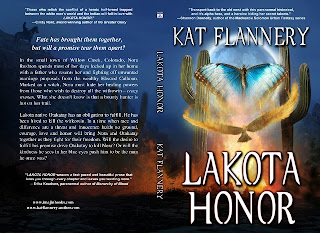 Fate has brought them together, but will a promise tear them apart?

In the small town of Willow Creek, Colorado, Nora Rushton spends most of her days locked up in her home with a father who resents her and fighting off unwanted marriage proposals from the wealthy Elwood Calhoun. Marked as a witch, Nora must hide her healing powers from those who wish to destroy all the witkowin—crazy women. What she doesn't know is that a bounty hunter is hot on her trail.

Lakota native Otakatay has an obligation to fulfill. He has been hired to kill the witkowin. In a time when race and difference are a threat and innocence holds no ground, courage, love and honor will bring Nora and Otakatay together as they fight for their freedom. Will the desire to fulfill his promise drive Otakatay to kill Nora? Or will the kindness he sees in her blue eyes push him to be the man he once was?

My Thoughts:
If you’re a sensitive person, you may find that Otakatay’s flashbacks will bring a tear to your eyes.  There are certain things that just seem to touch your heart and this is one of those stories.  You also have to feel sorry for the life that Nora has but she still makes the most of it.  She’s stronger than I probably would be in the same situation.

The author gives the reader a perfect ending to a great book and it’s done with no sex.  Which goes to show you that sex does not always make for a great book.  But it’s the author who makes a great storyteller.  And it leaves you wanting to know what she has coming out next.  She currently has another book out at this time and if you go to her web site, http://www.katflannery-author.com, you can find out more about it.  They say that the third time's the charm and I'm looking forward to seeing what that charm is.

At some point, my full review will be posted at:  http://www.loveromancepassion.com

Posted by Lynn's Romance Enthusiasm at 8:29 PM No comments: 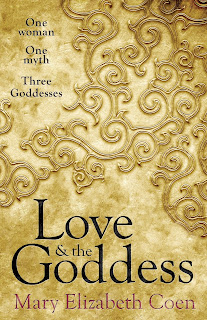 Touted in the press as ‘An Irish Eat, Pray, Love’ meets ‘Sex and the City’.

Love & the Goddess
One woman, One myth, Three Goddesses

A woman’s voyage of self discovery begins on the internet leading all the way to Brazil and onto the Andean highlands of Peru.

Devastated from her relationship break- up, Kate Canavan is at a loss until she re-discovers a hidden painting of the triple Goddess from Greek mythology. Her interest in mythology and spirituality is re-ignited. A voyage of self discovery begins with internet dating using the names of each of the Goddesses in the triple myth.
When a health scare intervenes Kate and her friends go together to visit a famous healer in Brazil and a spiritual guru in Peru, where all three friends begin spiritual journeys of forgiveness, gratitude and learning to live in the now.

Living in Ireland, Mary Elizabeth Coen is a former Home Economics teacher and lifestyle journalist. Mary E. runs a website called Goddess MECA which stands for Mary Elizabeth Coen Assists the Goddess in everywoman through sharing her love of cookery fashion and mythology.  The url is www.goddessmeca.com

Mary says “Though I always dreamed of being a writer, I took a rather circuitous route getting here. You could say I have had several incarnations in this lifetime from Home Economics teacher to Fashion Editor of a magazine, along with being mother to my three wonderful children, Mark, Janet and Emily. Due to demand from clients I opened my own pr consultancy firm specializing in fashion; - the dream job for a fashionista, availing of great discounts on wonderful shoes and vintage clothing!

Sadly it was not meant to last as in 2004 my health deteriorated and as a result, work had to take a back seat. I became interested in holistic medicine, personal development and writing in an attempt to cope with my diagnosis of fibromyalgia. In the process, I developed a passion for mythology, philosophy and the study of ancient spiritual traditions. As a spiritual seeker, I’ve travelled to Mayan sites in Mexico, visited a famous healer’s ashram in Brazil and undertook a shamanic journey through Peru.”
Love & the Goddess is closely based on memoir.

Posted by Lynn's Romance Enthusiasm at 10:52 AM No comments: