Today we have the excerpt tour for The Matchmaker Bride by Ginny Baird!
Check it out and be sure to pre-order your copy of this sexy new romcom today!

Title: The Matchmaker Bride
Author: Ginny Baird
Genre: Romcom
Release Date: July 27th
#InkslingerPR #GinnyBaird #romcom #romance #comedy #romanticcomedy #booklover #romantic #bookworm #books #booknerd #romancebooks #bookish
About The Matchmaker Bride:
A delightful romantic comedy from New York Times bestselling author Ginny Baird...
Successful Boston matchmaker and television personality Meredith Galanes’s reputation is on the line. During a guest appearance on a morning talk show, she’s broadsided by questions about her own romantic attachments, just as she’s trying to secure a syndication deal. Afraid to admit her love life is a total disaster, Meredith blurts out that she’s seriously involved with a very special man—a boatbuilder in Maine. She never expects that small slip to get spun into a story about her supposed engagement.
Or that the paparazzi will track the guy down…
Derrick Albright is laid-back about many things. Being hounded by the press about some imaginary engagement to a woman he’s only met once—and couldn’t stand—isn’t one of them. Then Meredith actually shows up at his cabin in Blue Hill, Maine, with an apology, a pot roast, and a proposal—play along until she secures her TV deal, and she’ll help him win back his ex.
It’s a simple plan, but if they have any chance of pulling it off, they’ll have to survive each other first...
Each book in the Blue Hill Brides series is STANDALONE: * The Duplicate Bride * The Matchmaker Bride

“Ah, actually. Romance is not a top priority for me right now. I’ve been—”
“No romance? What?” Tanya laughed like the idea was absurd, then pretended to share a confidence with the camera. “And here she claims to be all about love. An expert. Hmm.”
This interview was going downhill fast. Meredith glanced at the shadowy side of the stage, searching for Joel or April or somebody for support, but there were only producers and even more cameras. She didn’t dare look back at the suits.
“Well, sure I make time for romance! Of course. But, in my case, I appreciate keeping things a little...private.”
“Private?” Tanya challenged, not backing down. “What does that mean?”
Meredith tried not to break a sweat, envisioning cool mountain streams and waterfalls. “All it means is...” She smiled sassily at the camera. “We haven’t yet made things public.”
Finally. That should work in throwing Tanya off, but nope. She persisted.
“So there is a special someone.” She tapped her chin. “What’s his name?”
Meredith bit her lip. She couldn’t—just couldn’t—admit her disastrous dating history. What would the viewing public think? And those network execs? Joel was right—Matched Up would never get that syndication deal then. Tanya would make sure of it with her little humiliation campaign. And she was so close.
Tanya’s face fell. “No. Way. You’re not matched up at all, are you?” She forced a fake frown. “How sad. ‘Matchmaker Meredith’ has no match of her own. I wonder...do you tell your clients that you’re single? I can’t imagine that instills a lot of confidence in your...abilities.”
Low blow. Meredith’s gut tightened. Tanya was known for skewering her guests, especially her accomplished female ones. You’d think a fellow woman would help a girl up. Not knock her down, then step on her. Especially in front of network people. Tanya acted like she was above getting fired, and maybe she was. Even though Talk Time was only local, the show attracted tons of viewers. A few more at the moment than Matched Up. But that was mostly on account of Tanya’s enormous advertising budget. “Sure I do. I have a match, my perfect match.”
“Then give us a hint. Occupation. Location. Anything?” Meredith could practically hear the knell of a countdown clock ticking off the seconds in her brain. Her short segment was nearly up.
Ten. Nine. Eight.
Think, think, think. Meredith worked hard to come up with somebody. Anybody. If he was super impressive that would be amazing. Gorgeous would be a plus, too.
Six. Five.
Shockingly, only one gorgeous guy came to mind. One with piercing blue eyes.
And a smirk. How could she forget that part? Three. Two...
“Well, I guess we have our answer, folks. Thank you for joining us today on—”
“He’s a boatbuilder!” Meredith blurted out.
“Fascinating.” Tanya leaned forward. “Whereabouts?”
“Blue...Blue Hill,” Meredith stammered. Ooh, this is going to come back to bite me. She swallowed hard. “Blue Hill, Maine.” 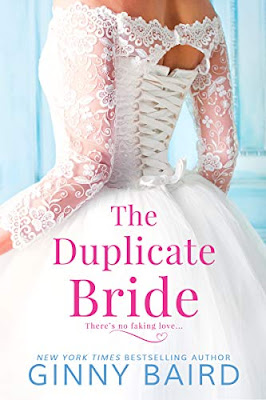 NY Times and USA Today bestselling author Ginny Baird writes sweet contemporary romance with a dash of humor and a whole lot of heart. She is the author of the Blue Hill Brides Series: The Duplicate Bride (2020) and The Matchmaker Bride (2021) from Entangled Publishing and current and upcoming works from Hallmark Publishing: An Unforgettable Christmas (2019) and On Christmas Avenue (2021), as well as several independent titles including her newest multi-author novella collection: Beach Brides Message in a Bottle Boxed Set (2021).
Visit Ginny's website to learn more about her and her books: www.ginnybairdromance.com.