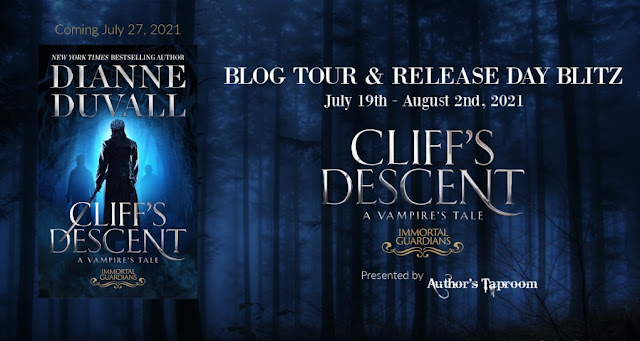 Cliff's Descent: A Vampire's Tale, the next novel in Dianne Duvall’s best-selling Immortal Guardians series, releases on July 27th, 2021 in ebook, audio book, and paperback formats everywhere!
We are thrilled to help celebrate this highly-anticipated story by participating in the blog tour today. Find out more about this book and grab your own copy below. Happy reading!

For the first time, New York Times bestselling author Dianne Duvall brings readers a novel--set in the "fast-paced" (Publishers Weekly) and "totally addictive" (RT Book Reviews) world of the Immortal Guardians--that revolves around a vampire… one who has become a friend and trusted ally of the powerful warriors.

Every mortal who works at network headquarters knows that vampires reside below them. They were the first to surrender to the powerful Immortal Guardians who hunt them. And they did so, hoping they can be saved, that the doctors and scientists the Immortal Guardians employ can halt the progressive brain damage that robs all vampires of their sanity. Though curious, Emma never thought she would meet any of the vampires who remain under heavy guard several stories beneath her office. Then mercenaries strike, bombarding the building with heavy artillery. The vampires are freed to join the fray… and Cliff saves her life.

From that moment on, she can't stop thinking about him regardless of the restrictions placed on interactions with vampires. When Emma discovers a way to speak to Cliff at network headquarters, she becomes even more fascinated by him. He's smart, charming, and honorable to his core despite the darkness that lies ahead. And he seems to crave her company as much as she does his. Aware of the eyes that watch them, they keep their encounters innocent, limiting them to those of mere acquaintances. Nevertheless, their attraction grows and she soon falls in love with him even as the madness begins to claim him.

Cliff realizes his future is dark. As one vampire friend after another succumbs to insanity, hope that network doctors will be able to find a cure in time to keep him from meeting the same fate begins to dwindle, leaving him little to look forward to… until he meets Emma. Just speaking to her brings him a happiness and contentment he hasn't experienced since before his transformation. And when they finally find a way to be alone together, everything changes. Emma burrows her way right into his heart and quiets the voices. She sparks dreams of a future with her that strengthen his determination to beat back the madness. But as time passes, the voices grow louder and insanity begins to chip away at him until he fears it will eradicate every part of him she fell in love with.

Will the two of them find a way to defy the odds and find their happily-ever-after? Or will Cliff's descent consume him?
𝗲𝗯𝗼𝗼𝗸 links:
Kindle | Kobo | Nook | Apple
AmazonUK | AmazonAU | AmazonCA | AmazonDE | AmazonFR
𝗮𝘂𝗱𝗶𝗼𝗯𝗼𝗼𝗸:
Amazon/Audible
𝗽𝗮𝗽𝗲𝗿𝗯𝗮𝗰𝗸:
Amazon - https://amzn.to/2UTZfPB
Excerpt:

Cliff looked around for the woman he’d seen helping the others and saw no sign of her. Swearing, he tore through the wreckage in search of her. An explosion took out more of the ceiling. Rubble rained down on the other side of the pile he dug through. “Come on,” he whispered. “Where are you?”

A moan reached his ears, followed by a cough.

Leaping toward it, he grabbed slabs of concrete and flooring and tossed them aside, reducing the pile until he found her.

Dust coated her like ash, powdering her braid and turning her skin a grayish white. She blinked up at him. Her forehead glistened with blood that oozed from a gash on one side.

Her chin dipped in a brief nod.

Another explosion hit what was left of the ground floor.

Cliff swiftly leaned over to shield her as flaming bits rained down around them.

As soon as it stopped, he knelt beside her.

“It’s okay. Don’t be afraid. I just want to help. Are you injured?” He swept his hands over her in a quick, impersonal search for injuries, concerned by the splotches of blood that marred her clothing.

“I already got her to safety. Are you Emma?”

Surprise lit her dark brown eyes as she nodded.

“I think your arm is broken, Emma. I need to bind it.” Tearing a strip of cloth from his T-shirt, he wrapped it around a deep gash on her arm. Then he tore another and—preternaturally fast—fashioned a sling.

“Sorry,” he said, knowing every movement caused her pain.

Nodding, she gritted her teeth. Her lips pressed tightly together as he lifted her into his arms, spawning even more pain.

“I’m sorry,” he said again as he dashed over to the elevator shaft.

She looped her free arm around his neck and looked over his shoulder. Her hold tightened. “Mercenaries,” she whispered in his ear, her warm breath sending a shiver through him.

Dianne Duvall is the New York Times and USA Today Bestselling Author of the Immortal Guardians paranormal romance series, the Aldebarian Alliance sci‐fi romance series, and The Gifted Ones medieval and time‐travel romance series. The Lasaran, the first book in the Aldebarian Alliance Series, was a #1 Audible Mover & Shaker. The Segonian, the second book in the Aldebarian Alliance Series, was a Barnes&Noble Top Indie Favorite. Audible chose Awaken the Darkness as one of the Top 5 Best Paranormal Romance Audiobooks of 2018. Reviewers have called Dianne's books "fast-paced and humorous" (Publishers Weekly), "utterly addictive" (RT Book Reviews), "extraordinary" (Long and Short Reviews), and "wonderfully imaginative" (The Romance Reviews). Dianne's books have twice been nominated for RT Reviewers' Choice Awards. And her audiobooks have been awarded the AudioFile Earphones Award for Excellence.

Dianne's books have all appeared on the New York Times, USA Today, Amazon, Barnes & Noble, Apple Books, and/or Kobo Bestseller lists. The first book in Dianne's The Gifted Ones series, A Sorceress of His Own, is a prequel of sorts to Darkness Dawns. A USA Today bestseller, A Sorceress of His Own is a medieval romance with paranormal elements that was awarded the AudioFile Earphones Award for Excellence and was an Audie Finalist. The second book in the series, Rendezvous With Yesterday, is a time travel romance that won the GraveTells Readers' Choice Award for Best Historical Romance.

In addition to writing romance, Dianne has completed a one-act play (comedy) and teamed up with an award-winning screenwriter to write a spec script for a new situation comedy. Several of her poems have also been published in anthologies.

When she isn't writing, Dianne is very active in the independent film industry and has even appeared on-screen, crawling out of a moonlit grave and wielding a machete like some of the psychotic vampires she creates in her books.

For the latest news on upcoming releases, contests, and more, please sign up to receive Dianne's Newsletter or visit DianneDuvall.com.