Author: Emma Castle
Narrators: Shane East, Lucy Rivers
Length: 9 hours 25 minutes
Publisher: Emma Castle Books
Released: Dec. 30, 2020
Genre: Contemporary Romance
Rating:  5 Stars
I received this audiobook as part of my participation in a blog tour with Audiobookworm Promotions. The tour is being sponsored by Emma Castle. The gifting of this audiobook did not affect my opinion of it. 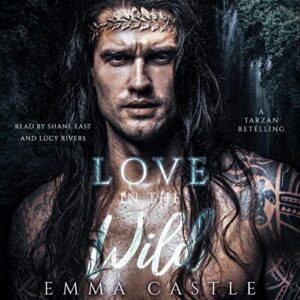 Eden Matthews stumbled upon the discovery of a lifetime while photographing wildlife deep in the heart of Africa....
A gorgeous god of a man living in the wilds of the African jungle among a family of gorillas....
When he saves her life, she’s compelled to uncover the man’s tragic past and the fate that led him to grow up in the wild.
But Eden soon learns she can take man from the wild, but she can’t take the wild out of the man....
When her savage savior soon shows her just what he wants of her...her sensual surrender...she finds she can’t resist him teaching her how to love...in the wild.

I have had a crush on Tarzan since I watched the old movies starring Johnny Weissmuller.  He was considered a hunk back in the day.  This author has brought a modern spin to the tale I fell in love with.  The only thing that I missed from the old series was that there’s no Cheeta but here it was more than made up for by having the gorillas – think of the Disney version.

We get to see what Eden had to endure on her first trip into the wild.  Ms. Rivers helped to bring our author’s characters to life.  She had a way of changing the tone of her voice when needed so that we know a male is speaking.  I’m a little biased when it comes to Mr. East.  I’ve listened to his work before and have never had a bad listen and that still holds true here.  Looking forward to listening to more of their work.

Our voice actors brought the scenes that Ms. Castle has created to life.  They help to bring us into the story as if we are on the edge watching everything happen in real time.  I liked how conservation is mentioned here several times – it's something I believe in.  This story also has suspense and romance that supports the action adventure.  Now that I’ve listened to the story, I don’t know if I could read it without playing the audio version at the same time.  I can certainly see listening to this book more than once.  Will also plan on checking out more of the author’s work.

Emma Castle has always loved reading but didn’t know she loved romance until she was enduring the trials of law school. She discovered the dark and sexy world of romance novels and since then has never looked back! She loves writing about sexy, alpha male heroes who know just how to seduce women even if they are a bit naughty about it. When Emma’s not writing, she may be obsessing over her favorite show Supernatural where she’s a total Team Dean Winchester kind of girl!

Hailing from London, Shane's Brit accent frequently tops Audible’s bestseller list and is a favourite amongst romance’s top authors. He's a multi Audie Awards nominee, Earphones winner, and has been crowned romance narrator of the year by Audiofile Magazine, The Romantic Times and SOVAS. Fans enjoy his work so much they’ve even started a fan club called the Shaneiaks (on Facebook). When not recording you can find him in the kitchen cooking up a storm. 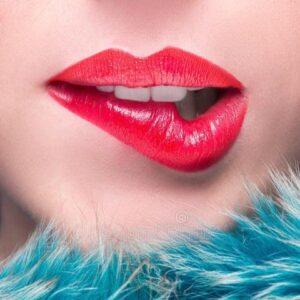 Lucy Rivers is a seasoned romance narrator, with Audie Award nominations, Earphone wins and a dedicated (and delightful!) fan base. When she’s not in the booth purring into a mic, she spends her time exploring back roads on her Harley and snuggling with her pussy…cat.

"If this title were being turned into a movie or television series, who should be cast as its characters?”
It’s every author’s dream to imagine their story in movie form and one of the best part is casting the roles for their characters. Below is a list of people I feel would best showcase the characters of my modern day Tarzan Retelling romance novel Love in the Wild.
Thorne – Our gorgeous, jaw dropping alpha male hero who is both intensely physical and sensual while also carrying a sense of innocence about him that endears him to everyone, yet he’s still bada** enough to fight off a lion and tame an elephant. I can think of no better actor to play both the jungle man and the refined British hero than Henry Cavill. Link
Eden – The brave and compassionate photojournalist is a match to her male jungle hero. She needs to be lovely without being too delicate or too overly fake. She’s a natural beauty and a woman with real curves and a healthy outlook on life physically and mentally. Jennifer Lawrence would make the perfect Eden. Link
Bwanbale – This is the native Ugandan man who completes the trinity of souls that make up the primary characters of Love in the Wild. He is just as important to the story as Thorne and Eden and I could think of no better person to play him than Don Cheadle. Bwanbale is the mind of this story, while Eden is the heart and Thorne is the soul. Don Cheadle would play Bwanbale’s quiet patience and gentle compassion mixed with a fierce protectiveness for those he loves. He is the man who brings Thorne into the modern world and shows him the beautiful and modern side of Africa while reuniting Thorne with Eden. Link
Archibald Holt – This is the villain of the story. He’s harsh and deadly. He’s cold and calculating and everything we’re meant to avoid in life. He’s full of greed and obsession for more. Nothing he has is ever enough. He’s always questing for more wealth, more power and he takes lives easily because they are simply in the way. Andy Serkis plays the perfect villain with depth and I believe he would make an amazing Holt. Link