Stroke the Fire by M. Christian Author: M. Christian
Publisher:
Length: 433 k
Sub-Genres: Gay Romance
Blurb:
The Best ManLove Stories of M. Christian
Sizzling tales of bad boys, bruised hearts, and sweaty encounters. Lambda Award finalist M. Christian’s stories of men-who-love-men have been selected for Best Gay Erotica, Best American Erotica, and Best of the Best Gay Erotica. Eavesdrop on what hot men who are doing hot things with other hot men say to each other between the sheets ... and up against the wall. Start reading the fiery ManLove fiction of M. Christian with this personally selected collection of his best. "A wonderful book … just the thing if you are in the mood for an enjoyable quickie (or twenty)." -Mathilde Madden, author Reflection's Edge. [Don't miss the other books in "M. Christian's ManLove Collection from Sizzler Editions.] And don't miss his Lambda Finalist book, Dirty Words. "Fairy tales whispered to one another by dark angels whose hearts and mouths are brimming with lust." -Michael Thomas Ford, Lambda Award winning author Looking for It.
Sizzler Editions/Attraction

My Thoughts:
This book is the best of M. Christian’s ManLove Fiction but it is so much more.  Instead of giving us one story, he packs in a lot of stories in just a few pages.  When you purchase this book you need to know that the stories can be very graphic.  And what’s good about an anthology is you don’t have to feel as if you have to read all the stories at once.

M. Christian gives us one story where he has you thinking of food.  He also shows the reader that there is more than one way for two people to love each other.  Some couples seem totally vanilla and others more adventurous.  There are those people that like to be treated like someone else’s property.  One short story had me thinking that if it were made into a movie Nathan Lane would be the perfect diva (a la Bird Cage).

Our author also doesn’t use the same type of story over and over.  We get some paranormal, a lot erotic, and even some gore (think bloody).  This book is not for someone who can’t think outside the box or have an open mind.  You need to accept strong language and scenes that are very descriptive.  There was one short story that had me think “incestuous”.  M. Christian even surprised me with one story with religious undertones (I have a feeling you will know it as soon as you read).  I will admit that a couple of the stories lost me – but it’s possible it was just me.  You will have to let me know if you feel the same.

If you are looking for a straight book of romance, you won’t find it here.  M.Christian explores all different types of love and you become a part of the story.  Unless you are a person with no feelings, you can’t help but be touched (good or bad) by his writing.  If you are someone that likes a little “meat” to your story, then you will want to get this book.

Posted by Lynn's Romance Enthusiasm at 6:04 AM No comments:

A Man To Trust by Cheryl Yeko 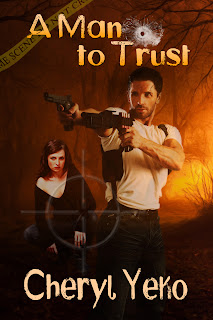 Angela Beebe’s husband Scott has been murdered.  Jake Bauman is the detective who informed Angela about her husband.  He thinks she’s hiding something and she thinks he’s an ass.  What a great way to start a great read.

Cheryl has also included a couple of secondary characters – J.D. and Stacey.  Stacey is a friend of Angela’s and J.D. is Jake’s brother.  Both couples seem to throw off a lot of sparks.  It must be hard for an author to develop a relationship for one couple but Cheryl goes the extra mile by developing two.

Cheryl lets her readers know that Angela loves to bake.  If you read this story, and I’m hoping you will, you will get a yummy sounding recipe.  You may want to give it a try but Cheryl doesn’t divulge the complete recipe.  You may want to search the internet to try to find the full recipe or contact Cheryl.  Maybe she will let you in on the rest of it.  And if you do contact her, let her know what you liked about this book.

At times, Cheryl has me holding my breath when I think something is going to happen.  She knows how to tease her readers with anticipation.  There are children in this storyline as well.  You see them at times but for the most part, they tend to stay in the background.  I would have loved to have seen more interaction between the children and Angela and Stacey.  I have a feeling that if this story had been longer that would have changed.  But with the intensity of the story, I can understand why there wasn’t – you don’t want to slow down the pace.  Leaving their interaction until the end was the perfect spot.  This was a great way for the story to end.

But Cheryl has left me with a question – what does she have in store for me next.  In doing the research for this review, I found out she has another book out titled Protecting Rose.  That book is about a fellow officer to Jake and J.D.  I will have to check that one out.  In the meantime, if you like teasers stop over to YouTube and check out her book trailer for A Man To Trust, http://www.youtube.com/watch?feature=player_embedded&v=Zrv8X7ECDg0.  You may want to check out her web site as well, http://www.cherylyeko.com/.

A Man to Trust by Cheryl Yeko

Author:  Cheryl Yeko
Publisher:  Soul Mate Publishing
Length:  206 pages
Sub-Genres:  Suspense
Blurb:
The battered survivor of an abusive marriage, Angela doesn't mourn her husband’s death in a drug deal gone bad. But she’s not sure she can survive losing her heart to the handsome detective who assumes she’s a criminal, too.Tasked with Angela’s safety after she’s targeted by an unknown enemy, Jake discovers the beautiful widow is not what she seems. He soon realizes that trusting her goes hand-in-hand with desiring her, and passion and duty collide.Now it’s up to Jake to keep Angela—and their chance at happiness—alive.
Excerpts:
Excerpt 1:
The kitchen scene I blogged on my site, and the recipe for Pear-Hazelnut Tarts -- the link to the recipe can be found on my website.
What am I doing? Angela raced to the refrigerator and opened the door to test the firmness of the dough, taking time to clear her mind from the sensual daze induced by Jake’s kisses.
Heat scorched her cheeks. If the timer hadn’t gone off, would she have let him take her right there on the table? She sprinkled flour onto the counter and placed the dough on it, forming it into a square.
“Can I help?” Jake’s husky voice drifted over her sensitive nerves as he came up behind her and heat radiated from him as he positioned himself at her back.
She pushed hair from her face and reached for the rolling pin, not looking at him. She felt like a gazelle being stalked by a lion.
“No, I’ve got it, thanks.” She rolled the dough into a rectangle, before folding the short ends over the middle to make three layers. Turning the dough a quarter turn she rolled it away from her into another large rectangle.
“That looks complicated.” Jake placed an arm at each side of her, then gripped the counter and peered over her shoulder. Effectively caging her in, his warm, minty, breath feathered across her face. “Explain to me what you’re doing. I might like to make it for my son sometime.”
Her hands trembled when she folded the short ends over the middle again to make another three layers. Normally, she’d place the dough back in the refrigerator at this point for another twenty minutes, but if she worked fast enough she could skip that step. And she wanted to get this done as soon as possible and put some space between her and Jake. Afraid she would throw herself back into his arms.
She glanced over her shoulder and met his heated gaze. His eyes smoldered with banked lust. “Seriously?”
He nodded, watching her with a predatory gleam in his eyes.
She took another shaky breath and glanced back down. “Okay. It—it’s a simple recipe really. I’m making dough for Pear-Hazelnut Tarts. I’ll write it down for you.”
“That’d be great.” His body pressed up against her.
Angela gulped. “Well—well, first you prepare the dough, then you need to wrap it in plastic wrap andrefrigerate for about half an hour.”
“Uh huh.” He leaned in and nuzzled her ear. “Refrigerate the dough. Got it.”
Her mind went into lockdown. Nothing but silence and sexual tension filled the room.
“I’m listening,” Jake brushed his thumb across her cheek. “Flour,” he murmured, nuzzling her neck.
“Oh.” Her body was wound tight and desire pooled in her belly, and her breasts felt heavy and aching with the need to be touched. A tremor ran through her.
She gave the dough another turn and again folded the ends over. “After you remove the dough from the refrigerator, you need to roll it flat, and shape it into a large rectangle, then fold the short ends over the middle so that it makes three layers.” She demonstrated it for him, although she didn’t really think he was paying attention.
“Right. Three layers,” he repeated. One hand slid to her stomach, tugging her closer.
Angela’s pulse raced. “Umm. Repeat this four times,” she managed to say. “The dough needs to remain firm, if not . . . if not, put it back in the refrigerator for another fifteen minutes before continuing.”
“Mmm, sounds like a lot of work.”
She gave her shoulders a little shrug to loosen his arms from around her. “Some space here, please,” she said, breathlessly.
Excerpt 2:
Jake tore his mouth from hers. His gaze scorched her with their heat, molten hot. “You drive me wild.”
He unfastened the first three buttons of her shirt and slowly slid the fabric from her shoulders and down her arms, until it pooled at her waist. A shiver of anticipation rolled through her, tightening her nipples. She licked her lips and stared into his darkened gaze.
His eyes flamed with desire. He leaned down and kissed the tops of her breasts. First one, then the other, then sucked a sensitive nipple into his mouth, sending a shockwave of pleasure to the apex of her thighs.
“Jake,” she purred.
He lifted his head and their eyes locked. “I love the way you say my name.” His hand slid to the inside of her legs and caressed a path of fire to the part of her that wept for him.
“Say it for me, Angel,” he whispered.
Buy Links:
Amazon- Kindle
Barnes & Noble
Soul Mate Publishing
About The Author:
Cheryl Yeko lives in Wisconsin with her husband Patrick. She loves to read, write, play piano and spend time with her grandchildren.
Although she has spent most of her professional life as a legal assistant, she can also include realtor, small business owner, and virtual assistant/mobile notary to her varied background. She is also a member of Romance Writers of America as well as the Wisconsin Chapter.
Cheryl is thrilled to be able to add author to her resume and would love to hear comments from readers.
Social Links:
Author's Website
Facebook
Twitter
GoodReads,com

http://www.carlyphillips.com/carlys-perfect-fit-fb-giveaway/ or http://www.facebook.com/CarlyPhillipsFanPage/app_228910107186452
Posted by Lynn's Romance Enthusiasm at 7:57 PM No comments: