Packed with callbacks to the Greek myth on which it’s based, this book will make for a satisfying read for any woman who’s mad at hell at the patriarchy and isn’t going to take it anymore, but also wants a laugh a minute along the way… 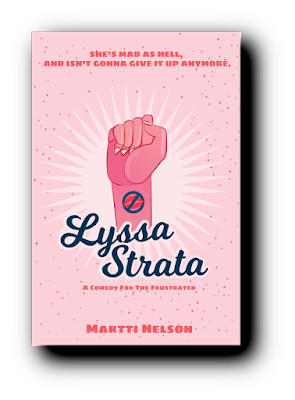 She’s mad as hell, and she’s not gonna give it up anymore.

Librarian Lyssa Strata has long begged the Town Council of Athena, Massachusetts, to repeal its disgusting old misogynist and racist laws. But the Council, an all-male entity for 400 years, has blown her off as a redheaded spinster—who, according to a 1673 law, should legally be run out of town at the end of a musket upon a poor fiscal year. So Lyssa seeks to invade the male bastion as the first woman ever on the Council. The men in charge treat her candidacy as a hilarious joke, which does not impress the female townsfolk.

The women are damn tired of being second-class citizens. For example, it’s illegal for them to use a toaster, as the manipulation of buttons is thought to impede brainwaves and cause menstruation. They decide to wield the only power left to them: Lyssa leads them on a sex strike as a revolt against inequality. The fellas are enthusiastic supporters! LOL no, they protest and issue death threats. Yet, when the national news shows up to cover the contentious election, everyone finally starts to listen to the ladies.

In retaliation against the motley crew of sex-strikers, the Council enacts the antique laws they assured Lyssa were merely charming historical trivia. She is accused of witchcraft and thrown in the stocks! Now this bookish dork, once content to hide in the stacks and distribute quiet feminism via checkout, is burning down her torture device and sending the evils of the past to the dustbin. When you want something done, do it yourself.

Or don’t do it—they’re on a sex strike, after all.

“If you’ve ever wondered what it would have been like if Terry Pratchett wrote The Handmaid’s Tale, this is the book for you.” —Jenny Trout, USA Today and Internationally Bestselling Author

“Funny and rage-inducing is a tough balance but Martti Nelson has written a book that is equal parts laugh riot and just plain riot. I want be Lyssa Strata’s best friend!” —Jen Mann, New York Times Bestselling Author of People I Want to Punch in the Throat

“There’s a lot to be frustrated about: the pink tax, politics, old white guys. Nelson deftly satirizes local politics and the patriarchy in Lyssa Strata. The ladies of Athena, Massachusetts may cherish a secret, but I don’t—read this book.” —Brooke Knisley, Your Local Redheaded Succubus. Oh, and Also Writer.

“Fans of Parks and Recreation, rejoice—there’s a new Leslie Knope to be found in Martti Nelson’s Lyssa Strata. Packed with callbacks to the Greek myth on which it’s based, this book will make for a satisfying read for any woman who’s mad at hell at the patriarchy and isn’t going to take it anymore, but also wants a laugh a minute along the way.” —Lana Schwartz, author of Build Your Own Romantic Comedy: Pick Your Plot, Meet Your Man, and Direct Your Happily Ever After

“A wickedly clever, sly take on the Greek classic that will have you rolling in the aisles of your own home as hard as the ancient Greeks rolled in the …aisles? Of their…. Ancient theaters??? Whatever, I didn’t read the original Aristophanes and neither did you. Save yourself the trouble and read this hilarious reimagination of it instead.” —Emily Flake, Saint Nell’s Proprietrix & Cartoonist, New Yorker

“Martti Nelson has created a character in Lyssa the librarian who anyone could love, admire and relate to—one who has had enough of the BS and does something about it. This novel will make you feel alive, or at least awake.” —Jessica Delfino, author of Amazon #1 bestseller Dumb Jokes For Smart Folks 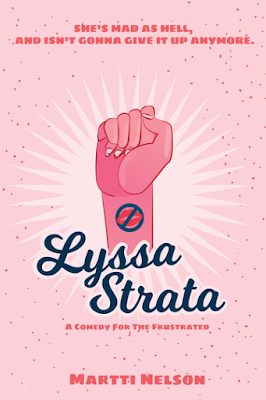 Lyssa Strata pushed up her glasses and prepared to say the words “birth control” to the entirely male Athena, Massachusetts Town Council, the average age of which was 80. It would’ve been higher if not for her stepfather, Councilman Daniel Park, who, at 42, brought the average from “nursing home” up to “Viagraville.” The last time most of these men needed birth control, it had come in the form of a chastity belt.

She waited for more.

Pickle coughed up something so alarming, Lyssa feared he’d be the second Council member to die on the bench this year. But he merely sucked on his dentures and glared at her wateringly. At least she’d grabbed his mummified attention. Most of the time, glances swept right past her to settle on something flashier, like an empty sidewalk.

“As I was saying…” Lyssa swallowed a sigh. “Statute 4-1 from 1829 outlaws birth control, marital aids, and red panti—er, underthings—”

“Except for pirates!” This from Councilman Thomas Mayweather, aged 91.

Lyssa forced a smile. “Yes. Pirates are allowed to wear red knickers, but I am not. You’re probably afraid my flat butt will become too powerful if clad in scarlet.” She snorted a laugh.

Ohhh-kay. Nothing like referencing one’s own backside on the official record. She should have given some pirate facts instead. Taken as a whole, they possessed more rights than she did in Athena.

“We can’t see your posterior in that dress,” said Mayweather. “But I enjoy its modesty.”

Lyssa spread the skirt of her reproduction Puritan dress circa 1657. She figured she’d get more attention in the getup after many failed pleadings before the Council regarding birth control laws, witch laws, and laws against dancing; maybe she should’ve dressed as a character from Footloose…

“Er, thank you. To continue…just for saying these things aloud today, it’s legal for you to throw me in the stocks, as if I were some miscreant bawd. Not to mention the laundry list of other horrible rules prohibiting women’s freedom.”

Lyssa’s neck hairs felt her mother stand behind her without so much as turning her head.

Moms said in a cool voice, “John Warren, you may address my daughter as Ms. Strata.”

“I’ve got it, Moms.” Lyssa flashed a smile her way. She didn’t need her mommy to help. Lyssa was a confident, bold woman who could take on the world single-handedly!

Ha ha, no, she sagged while swallowing the nausea in her throat. Lyssa detested public speaking almost as much as having to enforce late fees at the library. She was much more of a “love > war” kind of person. Or at least a “hiding with books > anything else” one.

“My chest has nothing to do with my objection to these laws, Mr. Warren. Although,” Lyssa groaned, “a woman with under a C-cup technically enjoys fewer voting rights in Athena.”

Lyssa’s jaw set to one side…although he could have been remarking upon his deafness.

Misty, Lyssa’s co-librarian and best friend, hurried to the podium. “Misty Meadows, my lords, with something to add—”

Pickle perked, his breath rattling to and fro.

The thread of Lyssa’s carefully crafted speech went straight down the toilet. This always happened—she could never effect change because no one took her seriously. She spluttered for a moment, and then fell back onto facts. Facts were beautiful friends who never cared about the size of her boobs. “Shall I name some other things prohibited for women in Athena?” 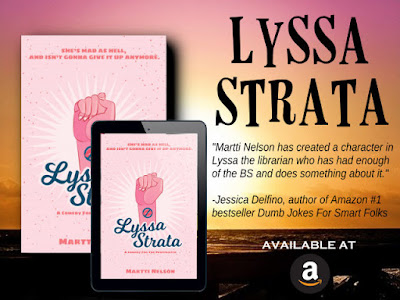 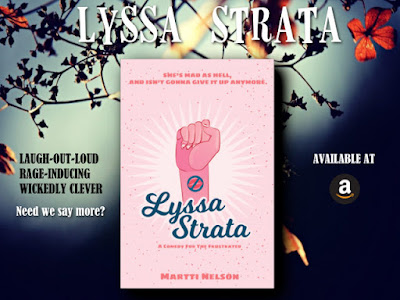 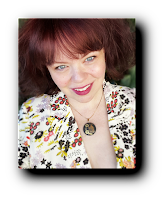 Martti Nelson is the author of comedy novels Lyssa Strata and Attack of the Rom-Com, which is due out later in 2021, as well as some love letters to Totino’s in honor of their fine Party Pizzas. She’s been featured on such luminous sites as Weekly Humorist, The Belladonna, Robot Butt, Daily Drunk Magazine, and Slackjaw. In addition to writing brilliant stuff that is often referred to as “stop mentioning menstruation so much,” Martti enjoys yard work with power tools that make her feel important. Martti creates funny books because she believes that humor can inspire joy, bring people together, and save the world, even in times of darkness. This bio has gotten a tad deep, so she will end on another joke. 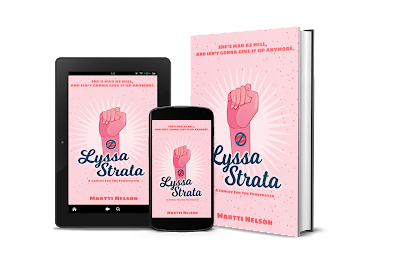