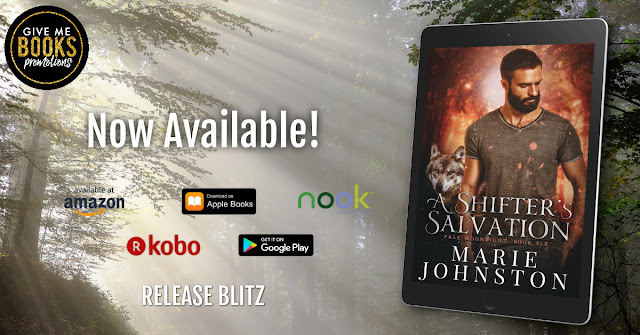 She’s used to rescuing strays and injured animals, but she’s not prepared for the wolf-shifter passed out in her ditch.

Patience doesn’t always live up to her name and she wants the guy she brought home to sleep one off gone. She’s figured out what he is, and since she’s human and shouldn’t know his kind exists, she’s worried he’ll start asking all the wrong questions. Because that’s not the only secret she’s hiding. The sooner her stray gets going the better.

Malcolm was lost in so many ways when Patience woke him up in that cold ditch. Just when he’s ready dust himself off and go back to work finding his long-lost sister, he realizes the pretty human knows more than she’s letting on. Since his job to is to protect shifter-kind, it’s a handy excuse to hang around.

It’s hard keeping her private life private when Malcolm ingratiates himself so seamlessly into every part of it, and even worse when she likes it. But when their pasts clash with their present and her secret rescue work is exposed, danger claws at her doorstep. Will that be when Malcolm finally leaves her for good?


A lumpy bundle in the ditch captured her attention. Patience was past it before she braked. Frowning, she peered in the rearview mirror and waited for the dust cloud to settle.


What was it? Too large to be a dog. Maybe a bear? A garbage bag? It wouldn’t be the first time some idiot tried getting rid of their trash on the side of a rural road.


Squinting, she couldn’t make out what it was, but she swore part of the blue appeared to be denim material.


Looking around, she couldn’t see a motorcycle or anything that suggested an automobile wreckage of any sort.


She ran her tongue along her teeth. Good thing she fueled up. Someone had to check this lump out.


She stepped out of her car and blinked in the sunlight. It was a cool day, typical for late spring. Dirty snow was still piled in the ditches, but it’d been a mild winter, and whatever the bundle was hadn’t landed in more than dried grasses.


“Hello?”
She inched closer to the edge of the road. If it was garbage, please be old rags. Something that didn’t ooze. Picking up other people’s trash was full of icky surprises.


“Garbage dumpers,” she muttered and crept closer. A mop of rich brown hair caught her gaze.


The pile wasn’t small. And it had hair.


Her heart rate kicked up. A person. But there was no vehicle around. Was he dumped?


She knew it was a he because of the size. Not that women couldn’t be that big. But this was definitely a guy. Because the more she studied him, the better able she could
make out that he was on his side and had incredibly broad shoulders.


“Excuse me?” she said, sounding more timid than she cared to.


She closed the distance between them and stood over him. His shoulders moved in time with his steady breathing. Good, he was alive at least. Before she could wonder about her personal safety, she crouched as far away as possible but close enough to reach out and nudge one heavily muscled arm. “Hey?”
Nothing.


Circling him, she had a dying need to know what he looked like. If she was getting taken down by a stranger, she wanted to see his face.


Admittedly, this stranger didn’t seem like he’d attack anyone any time soon.


A leather coat flap obscured his face. Since he was breathing, she pushed him to his back. A normal person would call an ambulance, but there was no way she’d risk
that. With her luck, Damian would be on duty, and she couldn’t risk running across him. The restraining order had expired and he hadn’t bothered her—yet.


The man groaned as he settled on his back.


Her lips parted. He was a mess. But he was a hot
mess. Bits of grass mixed with rich brown strands. A neatly trimmed beard framed his chiseled face. Everything about him screamed strength and power.
Quite a feat for an unconscious man. She didn’t have to move his jacket and shirt around to know that he had a great body.


But she had no wish to touch his shirt. Blood was spattered across it. She couldn’t see any open wounds. Not his blood? Her gaze swept his long body. No major injuries
other than bloody knuckles.


Her jaw tightened. He was in a fight before he ended up here. Self-defense? Or was he a mean bastard?

Marie Johnston writes paranormal and contemporary romance.
She also works as a medical laboratory scientist and has worked as a public health microbiologist. Depending on the situation, she can be oddly unconcerned about germs or weirdly phobic. Marie’s been a volunteer EMT, a college instructor, a security guard, a phlebotomist, a hotel
clerk, and a coffee pourer in a bingo hall. All fodder for a writer!! She has a husband, four kids, and even more cats.