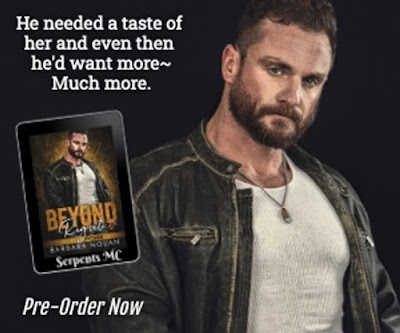 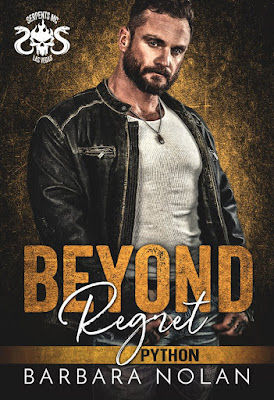 Virginia Swanson, the Channel 8 TV reporter, hit Las Vegas wanting to make a name for herself in the fickle world of news reporting. Desperate to leave her influential family in Beverly Hills, she’s determined to make it on her own. She hopes interviewing Python about the Serpents MC is the breakout story that shoots her career to the top.
A case of mistaken identity drops Virginia into Python’s apartment while he’s celebrating his birthday, in his bedroom, with two other women. The flush in Virginia’s cheeks, and the way the petite blonde stumbles out of his bedroom on her spike heels makes him smile.
The sight of Python’s muscled, tatted body invades Virginia’s dreams with fantasies. All of them with her in the starring role, but falling for the rough-edged Sergeant at Arms, isn’t part of Virginia’s plan—Until. These two opposites are thrown together again, and a night of sheet-gripping, lip biting passion ignites a thirst neither can quench, but the timing is all wrong.
Python’s dealing with a whacko president of a rival MC, and a vindictive bookie who wants his fifty grand. So to keep Virginia safe, Python pushes her away.
Virginia has some secrets of her own, and when Python’s life spirals out of control she may be the only one who can save him, even if it means giving up her new life in Vegas and returning to an existence she detested.
Can Virginia come to Python’s rescue in time, and prove to him that she’s tougher than she appears? Or will Python conquer his demons both tangible and internal, and bring them both to a place Beyond Regret. 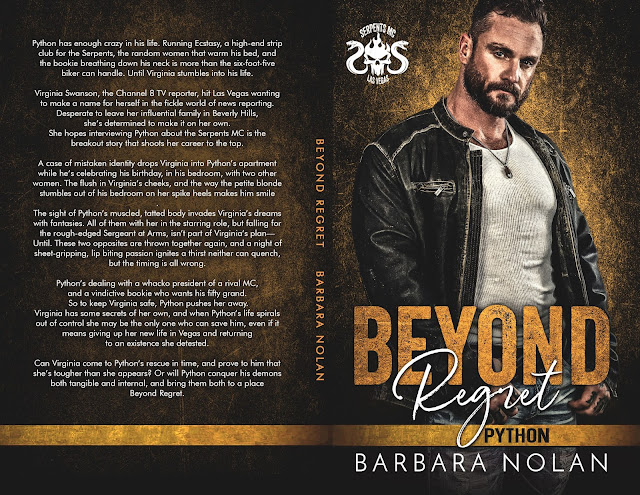 Virginia's three inch heels clacked along the blacktop of the large parking lot. The shoes pinched a bit, but at only five foot three the heels added to her confidence as well as her height. Walking into a strip club threatened to push all her low esteem buttons, but when she hit Vegas she promised to force herself out of her comfort zone. And what could be less comforting than stepping into a place where women with perfect figures strutted around half naked? She glimpsed down at her petite frame and modest breasts—no don’t go there.
She could do this and she would do this, because interviewing Python, a member of the Serpents MC would hopefully boost her career at KLAS-TV. A career she would get on her own without the help of her father, family name or their money.
Virginia needed to break out of her shell, and be more adventurous so she stormed forward like Wonder Woman. Although she felt more like Dorothy about to step into the Land of Oz.

PYTHON
Virginia smelled like sweet candy. All fresh and ready for him to take a big bite. Sure, he tried to tell himself that he could walk away from her. That it was better to never get started, but he didn’t do good with denying himself. He was a balls deep or nothing type of guy, and right now she was all he could think about.
Feeling her move and writhe under him, calling out his name, or straddling his hips with that beautiful blond hair draped over his thighs. He’d take her every way he knew how. Making her wet, making her needy, making her want him, need him.
She’d just became his newest goddamn addiction. Much scarier than dice or cards, much riskier than the horses. This addiction could wind him up and spit him out without a second look, and he didn’t care.