This post is part of a virtual book tour organized by Goddess Fish Promotions. 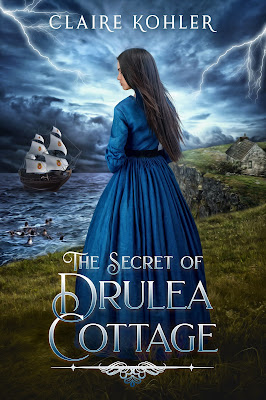 Briony Fairborn, a midwife in eighteenth-century Scotland, comes from a family shrouded in scandal. Left with only one friend after her mother’s death, she has little hope of gaining any others, let alone finding a husband. Instead, Briony tries to live a quiet life and avoid her neighbors’ ridicule as much as possible.

But things in Everton take a drastic turn when a storm brings foreigners to the village docks.

On the night Santiago Mendes arrives, he comes with a broken ship, a broken leg, and a broken spirit that Briony finds herself profoundly drawn to. Her scarred heart slowly starts to open, and although Briony suspects he may be hiding something, she cannot help but dream of the possibility of love.

That is, until another stranger appears in town, intent on repaying a childhood debt. A dangerously handsome stranger who shows Briony that she’s even more different than she could have imagined. And that her past is far darker than she realized.

Magic, romance, and political intrigue collide as the secrets surrounding one Scottish woman begin to unravel. Secrets that she may not be ready to face.

“Show me!” Santiago followed the sailor out, not bothering to check if Costa came too.

A monstrous storm the likes of which he’d never seen was swirling directly above the São Nicolau. Lightning descended in vicious bolts while giant black clouds blocked out all sunlight. Waves rocked the ship back and forth, making it almost impossible to stay upright. The mainmast started to bend; it wouldn’t be long before it collapsed.

But something hit him from behind, propelling him toward the mast—

Santiago was on his back, trying to scramble out of the way, but he couldn’t quite move fast enough. The top half of the mast crashed down, landing on his right leg.

He cried out as pain tore through his body. It was so intense that he felt his mind swimming, drifting in and out of consciousness. He tried to pull his leg out, but it wouldn’t budge.

Suddenly a silhouette appeared directly above him. Santiago’s heart leaped—

But then a pistol was in his face. With what was left of his strength, Santiago willed his eyelids to stay open. If this is to be my final moment, I’m going to make sure I look my killer in the eye.

Claire Kohler grew up in Mooresville, NC, as the eldest of four daughters. Her love of stories began at an early age, and as a child, she could often be found borrowing way too many books from the library and scribbling away in a journal.

In 2016, Claire became a full-time middle school English teacher in a public school. In her second year of teaching, she also taught social studies. After becoming pregnant in 2018, Claire decided to shift careers and become an online ESL teacher so that she could also take care of her newborn at home.

She now lives in Statesville, NC, with her husband, two children, and three cats. She is also an active member of Christ Community Church Mooresville, where she often serves as a Bible study and small group leader.

Claire plans to continue creating exciting historical fantasy novels and potentially branching out into other genres as well.

Website Link: https://secretdruleacottage.wixsite.com/clairekohlerbooks
Facebook Link: https://www.facebook.com/Claire-Kohler-Books-100151582291586
Giveaway:
Claire Kohler will be awarding a $25 Amazon or B/N GC to a randomly
drawn winner via rafflecopter during the tour. Click on the tour banner to
see the other stops on the tour.
a Rafflecopter giveaway