#ExcerptBlitz: Give Me A Reason by A.L. Jackson; #ComingSoon, #TBR, #PreOrder, #Giveaway 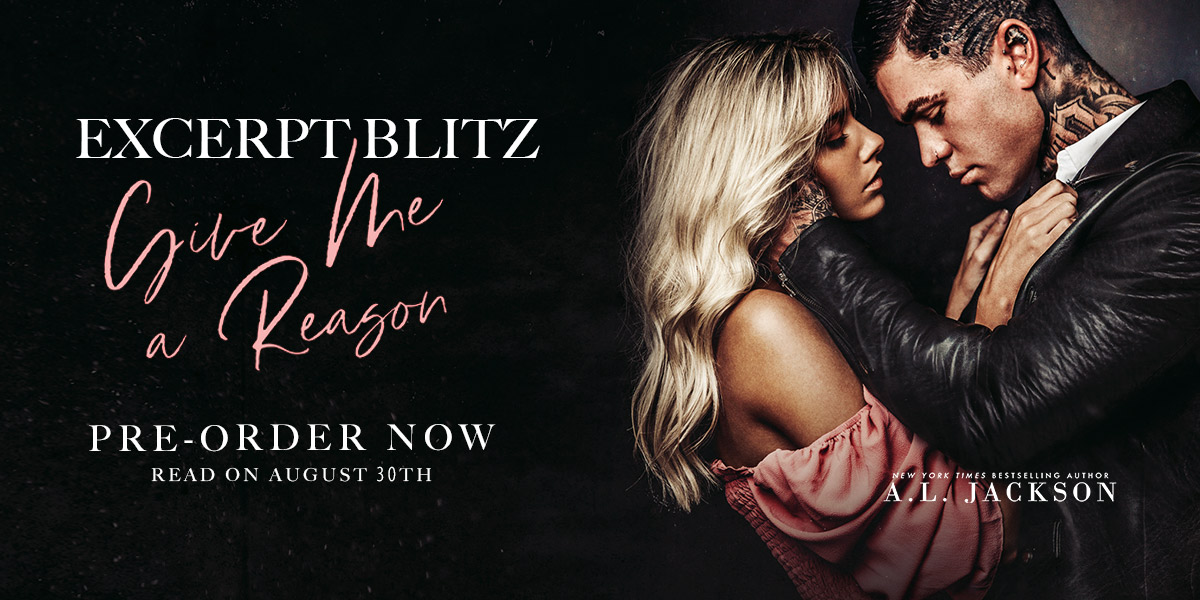 Give Me a Reason
from A.L. Jackson
A Single-Dad, Enemies-to-Lovers Romance
Coming August 30th

Can't wait for the release? Be sure to vote for GIVE ME A REASON as one of your most anticipated August reads on Goodreads!

“Speaking of hot guys…” She angled her head in the direction of a white Porsche Panamera that pulled into the parent pick-up line on the other side of the wrought-iron fence. “There he is.”

And I wondered if I was seeing things.

If this was some kind of cruel, sick joke or if I’d just done something really terrible in another life and this was my punishment.

Because there was no mistaking the smoldering eyes staring me down through the windshield where he came to a stop at the curb.

The way shock blanched his unbearably gorgeous face before his jaw clenched in what appeared hatred.

With the man, I was sure they were one and the same.

My hand tightened on the child’s.

A gut reaction to protect him.

Shivers raced. This unsettled feeling that something was coming. Something I didn’t understand, but something I should fear.

The man climbed from the driver’s seat of the flashy car that I wouldn’t have thought would fit him at all but somehow right then looked like the perfect accent piece.

He straightened to his full, menacing height.

“There he is! There he is!” The child started jumping up and down and waving his hand in the air. “Hi, Dad, hi! Over here!”

That seething intensity flashed through the air. My head spun and my knees knocked, my mouth going dry.

Trent Lawson strode toward the gate, all dark swagger and don’t-give-a-shit attitude, even though there were at least fifteen signs asking parents to stay in their cars and their children would be escorted out.

I got the sense the man wasn’t exactly one to follow the rules.

Because there he was, dressed a lot like he’d been last night, black jeans and a black v-neck tee and black boots that were unlaced. All that exposed, inked flesh somehow appeared obscene.

I had the urge to wrap the child up and take him into hiding. Run to the rest of the children and usher them to safety.

But I just stood there.

Finally, I mumbled, “That’s your dad?”

This really was some cruel, sick joke, and I was the very brunt of it.

“Yep! That’s him.” Gage was jumping and pointing. “Tell him I got an A, Miss Murphy! He’s gonna be so proud!”

Trent Lawson strode toward the gate with the clear intention of barging in.

Finally, I found my voice, calling out before he made it through the barrier. “Sir, you need to wait in your car. School isn’t over for a couple minutes, and we will bring your child to you. Parents aren’t allowed in this area without signing in at the office first.”

With his hand on the gate latch, he paused, an arrogant smirk ticking up like a threat at the corner of that plush mouth. “That so?”

I lifted my chin, still clutching his son’s hand. “Yes.”

He eyed me as if I were the enemy. “So, let me get this straight. I pay an ungodly amount of money for my son to come here, and you get to tell me when I can and cannot pick him up?”

“You’re paying for your child’s education, Sir, not for me to order you around.”

My chin lifted higher. “It seems you are very, very mistaken.”

A war waged in the exchange. That same tension that had existed last night clear and present, his outright animosity unchanged. But there was something else lining it, too.

As if I’d gained some sort of power as we stared each other down.

“You’ve got to wait, Dad! I told you I got to get all the As, and you’re gonna ruin it by not followin’ the rules. Sheesh.”

Tessa giggled beside me.

One second later, the bell rang. It jarred me out of the trance the man held me under, my entire being jolted with the sound, as if time had been set to pause and it’d begun to speed to catch back up.

Children screeched their excitement and ran to grab their bags that were lined up against the wall.

“Please remain in your car tomorrow,” I called out, the words roughened shards as I reluctantly released Gage’s hand.

“I’ll see what I can do,” he returned, just as smug and cocky and infuriating as he’d been last night.

Gage went running that way, that giant backpack bouncing all over. He glanced at me, running backward for two steps, nothing but grins and belief. “Don’t worry, I’ll be back to see you tomorrow, Miss Murphy!”

When the child made it to him, Trent stretched out a hand for Gage to take.

For a flash, his entire demeanor shifted when he looked down at the child and the child smiled up at him.

I had to be seeing things.

Then he turned to leave on those ridiculous boots, but not before he tossed out from over his shoulder, “See ya soon, Kitten.”

Anger rushed, my cheeks hot and my pulse wild and that irrational rage taking hold.

All mixed up with that feeling.

They walked back to the Porsche, and I remained rooted to the spot as he helped Gage into the backseat and into a booster before he rounded the front of the car and slipped into the driver’s seat.

The man glared at me before he tossed his car back into drive and pulled from the curb.

Fingernails curled into my upper arm. “Holy shit, Eden Jasmine Murphy,” Tessa hissed. “What was that? And you better fess it up now, because I can already feel your denial coming on, and there is no denying whatever the heck that was.”

She waved a turbulent hand through the air as if she could capture that feeling.

Something unattainable but real.

“That?” I let my eyes follow the car that whipped out of the drive far too fast. “That was my new boss.”

GIVE ME A REASON SURPRISE RELEASE BOX - reserve yours or an individual signed paperback here:

“Pure, unadulterated fire. Trent and Eden have a connection that is so rough and beautiful you can feel it bleeding off the pages! You're not going to want to miss this one!” — NYT Bestselling Author, Molly McAdams 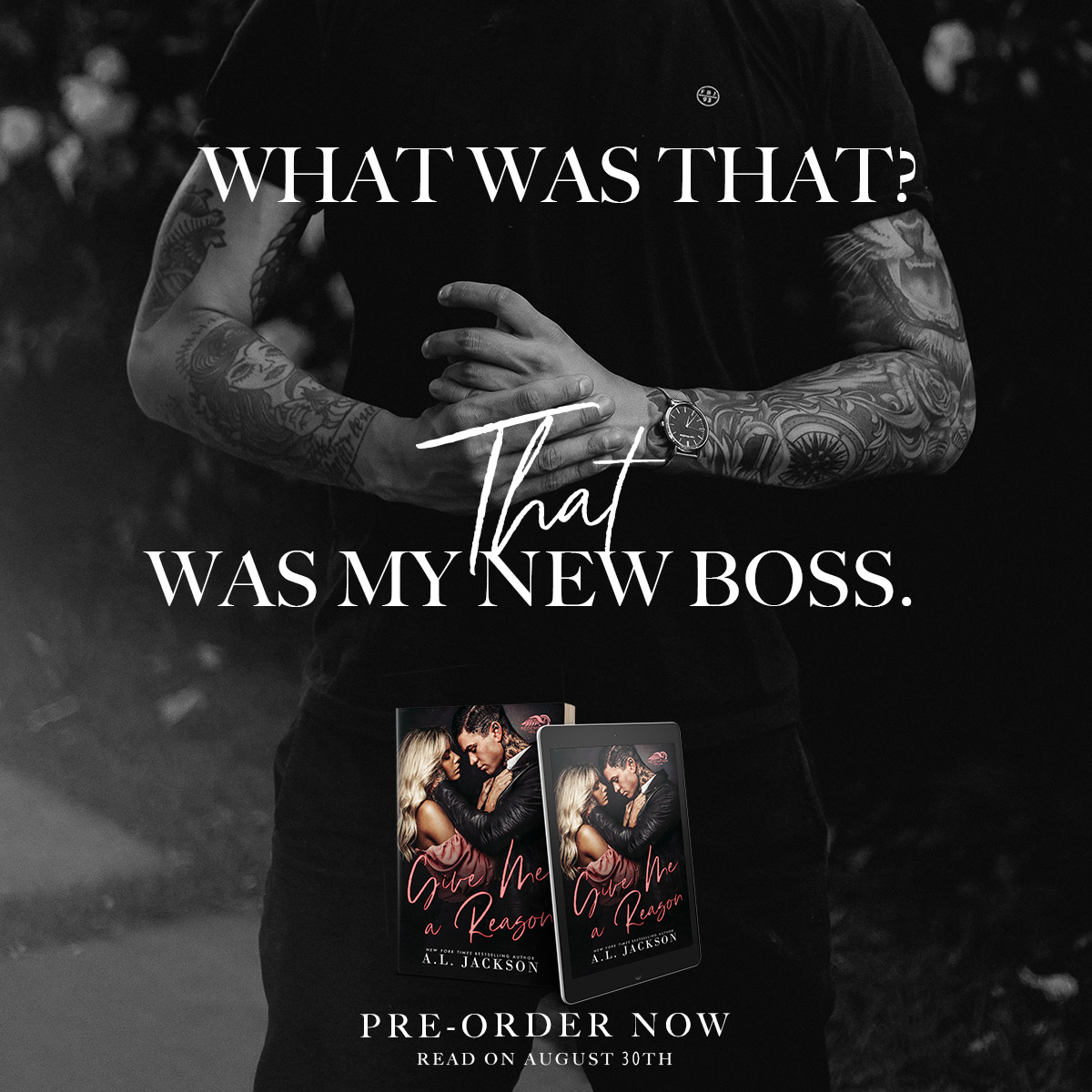 Want a Signed Paperback or Give Me Release Box? PRE-ORDER HERE 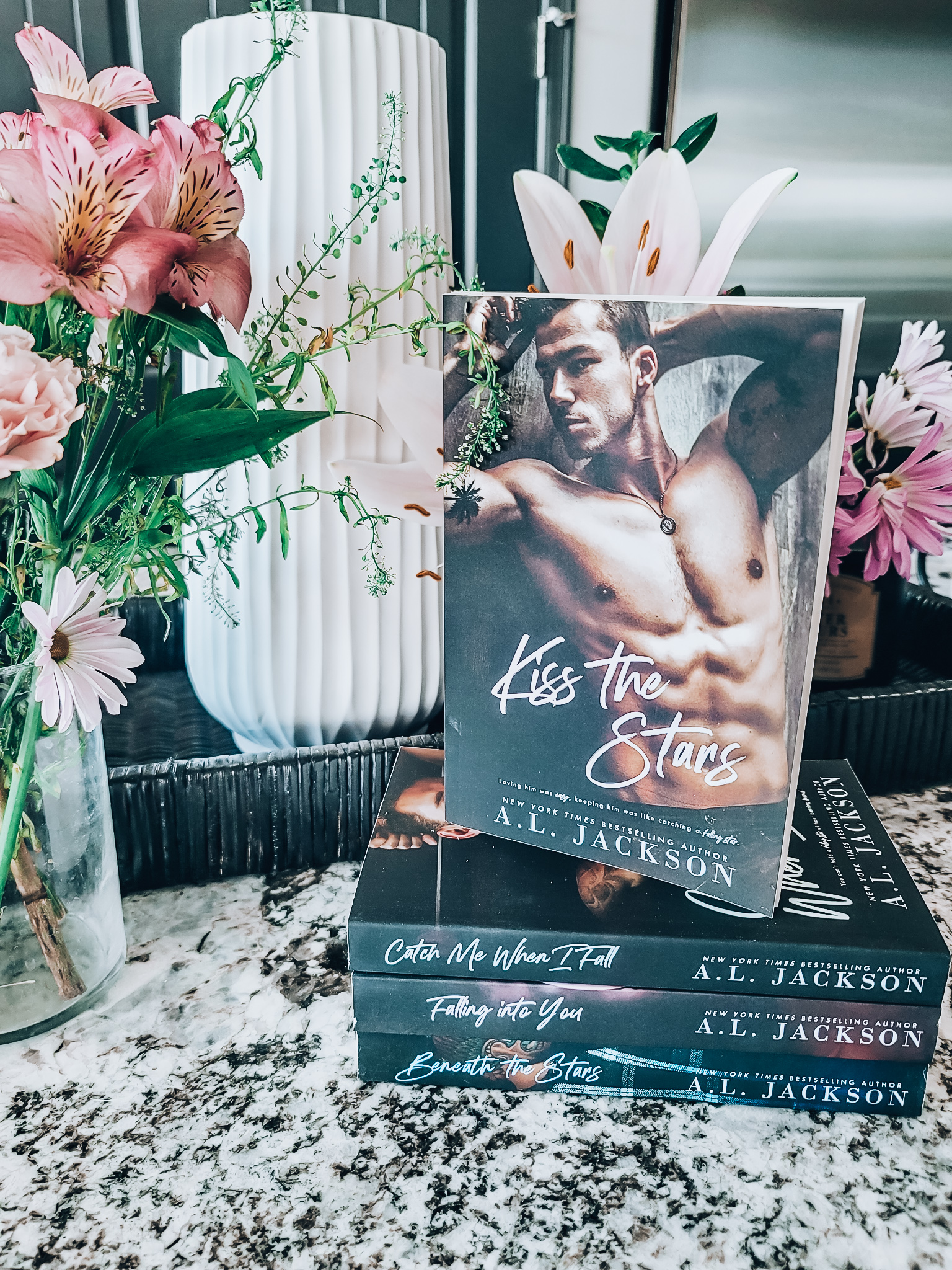 Want a Signed Paperback or Give Me Release Box? PRE-ORDER HERE

A.L. Jackson is the New York Times & USA Today Bestselling author of contemporary romance. She writes emotional, sexy, heart-filled stories about boys who usually like to be a little bit bad.

Her bestselling series include THE REGRET SERIES, CLOSER TO YOU, BLEEDING STARS, FIGHT FOR ME, CONFESSIONS OF THE HEART, and FALLING STARS novels. Watch out for her upcoming stand-alone, GIVE ME A REASON, releasing August 30th!

If she’s not writing, you can find her hanging out by the pool with her family, sipping cocktails with her friends, or of course with her nose buried in a book.

Be sure not to miss new releases and sales from A.L. Jackson - Sign up to receive her newsletter http://smarturl.it/NewsFromALJackson or text “aljackson” to 33222 to receive short but sweet updates on all the important news.