My name is Vicious. God-given name, I cross my heart.

I’m a hot-as-f, inked-up tattoo artist at the trendiest shop in the Rocky Mountains.

That means I get the ladies.

Sure. There are lots of women out there who hate tattoos. Wouldn’t be caught dead with guys like me. And that’s fine. I’m not looking for girls like that.

I’m looking for that other kind of girl.

Funny thing is… the one I fell for isn’t that girl.

And maybe back when she was nineteen I came off as a ‘maybe’, but after seven years of distance I am now the definition of ‘not a keeper’.

But I can be a keeper.

I can make the good girl swoon.

I can be the dream guy she never saw coming.

If she would just… not press charges… I’m pretty sure I can turn this whole relationship around.

Vic Vaughn is Vicious is a bad-boy-trying-his best-to-win-her-back romantic comedy about a misunderstood tattoo-artist-biker called Vicious and a good girl named Daisy who ghosted him seven years ago after she came to her senses. It’s filled with funny twists, dreams of grandeur, and all seven members of the most inappropriate family in all of Colorado.

IMPORTANT! The eBook will release a day early on Nook, Apple, and KOBO (August 30th) and then IMMEDIATELY BE TAKEN OFF SALE so that Vic Vaughn is Vicious can go directly into Kindle Unlimited. This book WILL ONLY BE AVAILABLE ON AMAZON after August 30th. 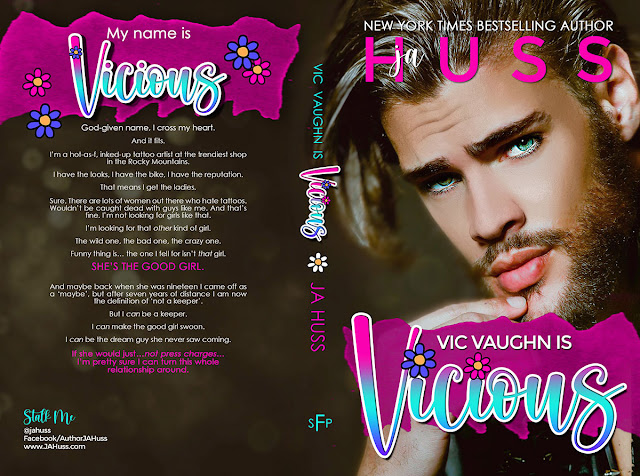