This post is part of a virtual book tour organized by Goddess Fish Promotions.
. Click on the tour banner to see the other stops on the tour. 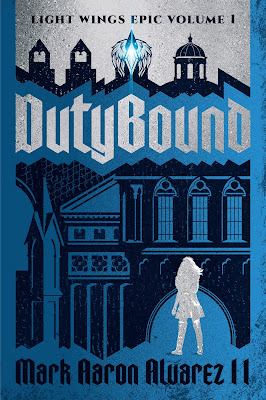 The world was their creation until they sought to destroy it.

Dutybound is the story of Terestria and its Virtues, heirs of nobility forced to face the Sins of their forefathers and bring their world from the brink of Darkness. Among them is Lucia Sanoon, High Maiden to the province of Moz and chosen of the Light Wings. The ancient relic, bestowed upon a long-forgotten civilization by the Light itself, was forged to harbor the Light's essence if ever Terestria's balance were threatened by the Darkness' desire to corrupt the Light's most-prized creation, Life. If successful and the long-standing covenant between the Light and its Protectors were ever to be broken, the Darkness would be free to roam Terestria and reclaim the land it had a hand in creating, bringing death and destruction to every corner of the world.

But as long as there is Light, there is hope. With the help of the Light Wings and its power, Lucia must heed its call to assemble the Light's Virtues and lead them into battle against the very Sins that seek to destroy their world. But finding the four will not be easy, for much of the knowledge is lost and the understanding of one's own morality is the only key to unlocking the power each of them holds within.

A story of faith and morality, Dutybound will lead you through a journey of self-discovery as our heroes face conflict from outside and within themselves. Duty, desire, envy, hope, hate, love, pride, and temperance all are challenged within this series in an epic tale that is sure to have you pondering your own true nature.
Amazon Buy Link:
https://www.amazon.com/Dutybound-Light-Wings-Epic-1-ebook/dp/B08ZDWYVDZ/ref=sr_1_1
Read an Excerpt:

Not long ago, I started feeling it again. Don’t you remember? The strengthening cold and bitter skies were only signs of its return. I can never forget the pain of Frailty’s War. I bear this burden of recalling the horror, and still, it pains me to know even you hold that, my dear. Unfortunately, I must tell you that soon we will not be safe. The fog has begun to grow thick, and wrath-filled winds blow from the north, where Pinea lies, building their empire with envy and hatred toward our sovereign nation. Though we won our place of power here in Moz, I can only say it came at a grave price, one that will plague our world if the bonds of our sins are not destroyed. It is critical that we protect what good is left in this world and amend the wrongs of the past.

I fear the worst for our family and would never forgive myself if I waited for its return. Thus, it is here in a place of faith that I tell you I must leave Moz to seek out its source and see to it that this force is driven to where it can no longer threaten us. But at all costs, please, remain here in Moz and wait.

With utmost importance, take care of sweet Lucia so that she grows into a bold and passionate maiden with prayers determined enough to protect and preserve us. I do promise to make it back to you someday. My love shall be with you both. Always.

Stello Sanoon
Giveaway:
Mark Aaron Alvarez II will be awarding a $15 Amazon or B/N GC to a randomly drawn winner  during the tour
a Rafflecopter giveaway
About the Author:
Mark A. Alvarez II is a Hispanic-American born in Houston, Texas. He’s a graduate of Texas State University, where he studied public relations and mass communication. He was an apprentice at the NEW Apprenticeship where he was certified in digital marketing. He is the CEO of Light Wings Promotions LLC, a digital marketing and creative branding agency in San Antonio, Texas, where Mark currently resides.