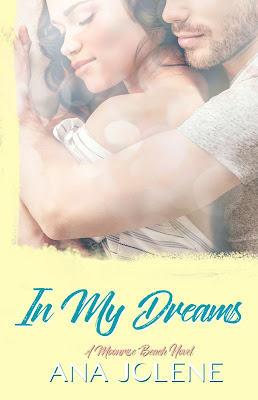 IN MY DREAMS
By Ana Jolene
Moonrise Beach, Book Six

Sage Bishop lost everything when her husband, Cole, died in a tragic car accident. But in overcoming her grief, she has also managed to create the first dog café in Moonrise Beach. Although Latte Love is bursting with success, Sage still feels the hollow ache that her husband’s absence has left behind.

After the death of his older brother, Bodhi Evans fled the country and moved to Australia to pursue his surfing career. But when his training brings him back to Moonrise Beach, Bodhi must come face-to-face with his grief and his brother’s widow—the same woman who he has loved since he was a child.

Will seeing each other again after all these years reopen old wounds? Or will Sage and Bodhi finally be able to let go of the past and discover the healing power of love?

“DRIVE ME WILD was my introduction to this new author Ana Jolene and she created some endearing characters in this book and I look forward to meeting many more. I am a character person, so Ana Jolene has definitely spiked my interest. A fast-moving account of facing life’s complex challenges with love, humor, and honesty.” ~ Fresh Fiction
“I found so much to love about this story. I found even more that I wanted to know about the Happa-Hewitt family. I wanted to learn more about Moonrise Beach and it’s characters. The flow of this one had you laughing, crying, and celebrating. It was more than just a good ole reads. You could take this one to the beach and forget you were there.” ~ The Book Junkie Reads

“GLORY is definitely one of my top MC books of the year!” ~ Kylie’s Fiction Addiction

“[NIRVANA] is an amazing twist on the motorcycle genre we see so much of and the popular dystopian theme.” ~ Fresh Fiction
Excerpt:

The following morning, Bodhi rose early. He had training in an hour, but he wanted to stop by Latte Love before then. He promised himself he’d stay away for Sage’s sake, but he’d be lying if he said that he wasn’t a little bit curious about her. Bodhi knew that he would regret it if he didn’t at least see what she was up to with his own eyes.

Latte Love looked amazing from the outside. First of all, it was much larger than he expected it to be. But if dogs were able to roam around while their owners enjoyed coffee and cake, it made sense that it would be bigger than a normal café. He also liked the design of the sign out front. It was fun and inviting, but not overly girly either. Sage clearly knew what she was doing. If Cole were here, he would be immensely proud of her.

As he stood in front of the café, Bodhi realized that he was smiling, but then it faded as he realized that he wouldn’t be stepping foot inside. Although he’d been worried about Sage, seeing Latte Love up close proved that she was doing well.

Suddenly, he felt stupid for coming here. Even now, he felt unsure of whether he should be even thinking about Sage.

God, he missed Cole. And he realized that he missed Sage too.

Being in Moonrise Beach made him regret not keeping in touch with her. If Cole found out what he’d done, he’d no doubt pummel him. The guilt scraped against his insides like nails.

Gritting his teeth, Bodhi turned around to return to his car when he suddenly froze. “Shit,” he breathed when he saw that he wasn’t alone.

Sage Bishop stood a few feet away from him, looking at him as if he were a ghost.

Upon seeing her again, his heart went into override, pumping hard in his chest. Oh God, what was he supposed to do now? Should he talk to her? Should he leave?

She was more beautiful than he remembered. Her caramel hair was longer now, reaching past her shoulders. She hadn’t aged since he’d last seen her, and for some reason, that brought a smile to his face. He’d always loved her petite frame and her bright smile.

But Sage Bishop wasn’t smiling at him now.

“Sage,” he finally said, his voice coming out much softer than he’d intended it to be. “It’s me, Bodhi.”

Sage nodded at him. Her expression was serious. “I remember.”

Bodhi took a step toward her, but then regretted it when his feet refused to move. As he recovered, his face turned red with embarrassment. “It’s been a long time.” As soon as the words left his mouth, he instantly regretted it.

God, what the fuck was he saying? Way to make things more awkward between them by bringing up the past. He thought about moving toward her again, but he was worried that his legs would give out. He was so nervous that his body was starting to fail him.

Instead of going anywhere, Bodhi settled for staring at her. So beautiful. He always thought his brother was a lucky bastard for finding this beautiful woman and making her his wife. When he’d been younger, he hadn’t always been able to hide his jealously, but Bodhi had always dreamed of having someone like Sage in his life. For him, Sage Bishop was the ultimate woman.

And she was also the woman he could never have. 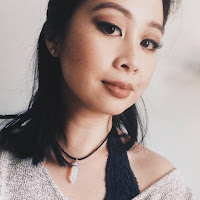 Ana Jolene is the author of the Glory MC series, a New Adult Dystopian and the Contemporary Romance series, Moonrise Beach.

Growing up as a rebellious kid didn’t allow for much reading time. It wasn’t until Ana was in university that she found her passion for books and has since then devoured every book placed before her. Ana holds a B.A. in Psychology and has worked in both IT and Administration. But she’s had the most fun in the bookish world, working as a reviewer, columnist, and assistant to multiple sites and best-selling authors.

Ana currently lives in Toronto with her family and an extremely lazy Shih Tzu whom she adores. To learn more about Ana and her books, please visit her website www.anajolene.com and subscribe to the newsletter to be notified of the hottest new releases and giveaways!

Welcome! You’ve just released the newest installment to your Contemporary Romance series, the Moonrise Beach series. Can you please tell us more about IN MY DREAMS!

Sure! First of all, thank you so much for having me here today. I’m very excited about the release of IN MY DREAMS, the sixth book in the Moonrise Beach series. Although it’s the sixth book, it can definitely be enjoyed as a standalone but of course, you’ll have a much more richer experience if you read the series in order.

What’s unique about IN MY DREAMS is that it has a Women’s Fiction twist to it. This is my first time trying out this subgenre in one of my books. However, if you’ve read my other books in the series, then you may know that I love to mix genres together. Women’s Fiction is one of my favorite genres to read, so I wanted to write a story that focuses on the heroine’s struggles and growth.

Sage has gone through so much pain and heartbreak throughout the series, so when it came to writing her book, I wanted to give her a worthwhile experience and give her the best love story I could write. From the reviews and fan letters I’ve received, it seemed that you all enjoyed it, so that makes me very happy.

What was the biggest challenge you experienced while writing this book? How did you overcome it?

The biggest challenge was the emotions. I had to tread lightly because it dealt with grief and a slew of other emotions that were quite delicate. Since people experience grief and death differently, I wanted to explore it in a way that was realistic and believable. I think I was able to capture it by slowing the pace of the book down and really focusing on the bond that the hero, Bodhi and Sage have. From there, I was able to build on their connection and create a romance that I’m proud of.

What’s next for Ana Jolene? What are you currently working on and what can we expect to see from you next?

I’m currently writing a brand new series. I can’t say too much about it just yet, but it will be another Contemporary Romance series. In the Fall, the next book of the Moonrise Beach series, BAD AT LOVE, will be coming out. I tease a little bit about Mark and his story in IN MY DREAMS, so I’m sure a lot of readers will be eager to grab his book when it hits the shelves. I’m glad so many readers have fallen in love with this world and the characters that I’ve created. I can’t wait to show you what I have planned for you guys next!

Thank you so much for answering our questions! IN MY DREAMS is now available on Amazon and is free on Kindle Unlimited. Don’t forget to follow Ana Jolene on her social media and subscribe to her newsletter to keep updated on her books!