This post is part of a virtual book tour organized by Goddess Fish Promotions. Anya Summers will be awarding a $25 Amazon or B/N GC to a randomly drawn winner via rafflecopter during the tour. Click on the tour banner to see the other stops on the tour. 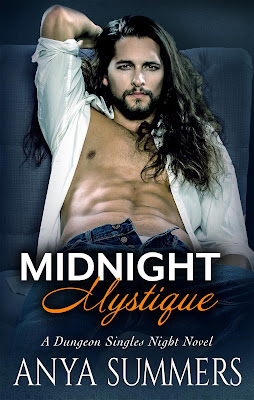 The last thing she expects is for the Bad Boy of Eternal Eros to step in, sweep her off her feet, and offer his protection.

Maybe she accepts because they were matched up at the last singles night. Maybe it was the scorching passion she experienced at his skilled hands. Maybe it’s the way he dotes on her daughter.

All she knows is that the more the lines between reality and fantasy blur, the harder it will be to let him go. The more time he spends posing as her fake fiancé, the more she realizes she’s no longer faking her feelings. With every touch, every kiss, every heated glance, she realizes she wants more than one night. She wants the scarred bad boy’s heart to be hers for all time.
Buy Links:
Amazon https://amzn.to/3s7cIyI
Nook https://www.barnesandnoble.com/w/midnight-mystique-anya-summers/1139381976
Kobo https://www.kobo.com/us/en/ebook/midnight-mystique
Apple https://books.apple.com/us/book/id1558154251
Universal https://books2read.com/u/3LR0vD
Read an Excerpt:

Dakota’s breath caught at the undercurrent that zapped between them. He cast her a sardonic grin. It was as if he knew she didn’t want to scene with him, and his gaze dared her to withdraw from participating.

Like she would give him the satisfaction of calling her a coward or a welcher. He didn’t know her.

But he was about to—intimately. Shivers washed over her in a tidal wave. For better or worse, she would know his touch. Unease churned with need, like her body couldn’t settle on one emotion or sensation.

Straightening her shoulders, she nodded, bowing her head out of respect. Better to begin as she meant to go on and avoid any punishments. She set the bin down in the corner, where it would be retrieved tomorrow. With her heart drumming a fast beat, she left the pit and headed toward the scene area indicated on the marker.

At least Ryker’s spot wasn’t a public one. Not that she minded public scenes or steered away from them, but in this, with a Dom she didn’t know, she preferred privacy. That way, if she embarrassed herself with him, no one else would be around to witness the spectacle.

Dakota rode the elevator down one floor and strode to private room number ten. The hallway was decorated like the floor upstairs, with dark gray hardwood floors and inky black walls. The golden lighting was muted, adding a seductive quality to the design. All the private rooms were comparable to one another in aesthetics, with the same color scheme. What differed in each one was the furniture contained inside, which varied from room to room. But each private room had its own bathroom, and a chest of drawers stocked with everything from condoms to lube to butt plugs and floggers.

Room number ten sported a black leather couch, a chair, and a black padded table that resembled what could be found in a doctor’s office. The backrest could be raised and lowered at will. There were metal stirrups that were currently retracted into the wood base below, and a number of silver loops to which to affix all manner of cuffs, bondage rope, and Velcro restraints.

Dakota quivered when she spied the Velcro restraints already in position on the table. Would he bind her to it?

And what type of scene would Ryker expect?

With a few deep, calming breaths, she knelt in the center of the room and awaited his arrival, trying like mad not to focus on her disquiet at scening with a new Dom, and instead on what she hoped would be a night full of pleasure.
Giveaway:
The author will be awarding a $25 Amazon or B/N GC to a randomly drawn winner
during the tour.
The more you comment, the better your chances of winning.
a Rafflecopter giveaway
About the Author:

Anya is a bestselling and award-winning author published in multiple fiction genres. She also writes urban fantasy, paranormal romance, and contemporary romance under the name Maggie Mae Gallagher. A total geek at her core, when she is not writing, she adores attending the latest comic con or spending time with her family. She currently lives in the Midwest with her two furry felines.