Wendy LaCapra has been reading romance since she sneaked into the adult section at the library and discovered Victoria Holt & Jane Aiken Hodge. From that point on, she dreamed of creating fictional worlds with richness, intrigue and passion. Her stories have placed in several contests, including the 2012 Golden Heart® and her debut series, a trilogy about three Ladies who refuse to play by society’s rules, was released by Entangled Scandalous. She lives in NYC with her husband and loves to hear from readers. For new release and sale alerts, sign up at http://bit.ly/GetWendyNews 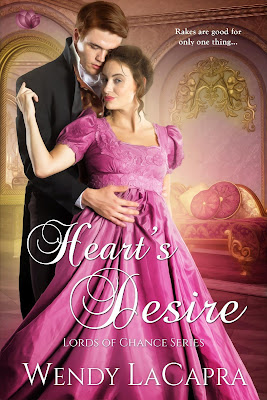 Lady Clarissa has decided to live life on her terms. After the end of a ten-year betrothal, she wants nothing to do with marriage or the men of the ton. Least of all her friend’s brother, the very charming Lord Markham, or Hearts, as many ladies call the oh-so-handsome earl.

Markham pursues relationships with no ties that bind. Acting the rake leaves everyone satisfied...until he overhears a wager that could lead to Clarissa’s ruin. He can’t help but step in and claim she’s his intended bride.

Clarissa is appalled. She did not need to be saved. Reluctantly, she agrees to the fake courtship, if only to experience what the rakish Markham can offer. But when lust becomes love, Clarissa must make up her own terms and bet it all on Hearts.


A few moments ago, Clarissa had chosen to eavesdrop, fully understanding that, if caught, she’d suffer embarrassment.


She hadn’t understood her peril.


Embarrassment was tripping on one’s petticoat, missing a crumb at the corner of one’s mouth. Crushing her nemesis’s cravat with a rouge-darkened cheek and leaving behind a bright pink imprint on his starched linen shirt wasn’t mere embarrassment.


It was complete humiliation.


She’d attempted to avoid the collision by ducking into the adjacent servants’ stair, but Markham had been moving with uncharacteristic singleness of purpose, and she hadn’t time to avoid his chest.


A chest with a cheek-sized valley conveniently situated over his rapidly beating heart.


The edge of his collar tickled her nose. She sniffed and was engulfed by his scent. Spicy and dark…rather like tea. The richly steeped kind that lingered on the tongue, hot and tart.


Warming from the inside out.


She jerked back, pinched her lips, and glanced up. His pupils were still wide from the darkness outside. Rain had dampened his amber hair into the color of newly fired brick. Much to her dismay, those dimples that never ceased to raise her ire failed to appear.


He exhaled harshly. “One hundred and fifty-one.”


He shook his head involuntarily. A rain droplet transferred to her cheek.


“Never mind.” He released his grip on her elbow, and the room swayed, absent his sturdy support.


Did he find her that abhorrent?


She stepped forward again. The door clanged shut as his back hit the wood.


“I hadn’t realized you needed to collect more evidence of my want of character,” he said acidly. “Did you hear anything of interest?”


She held his gaze, blinking.


Markham was glib. He was infuriatingly patronizing. He was far too confident. But never before had he sounded bitter.


She cleared her throat. “I don’t know what you are—”


“Oh?” he interrupted. “I suppose you were just searching for the ladies retiring room…in a house where you’ve been a guest for the last eighteen months.”


“Not quite eighteen,” she pointed out. “I did accompany you and your sisters to Bromton Castle last summer.”


Recognition flared behind his eyes—a brief remembrance of the uneasy truce they’d called while trying to distract Julia from remembering her broken heart.


She’d seen a different side to Markham, then.


But that didn’t change the fact that he moved through the world totally at ease, rarely serious, taking the admiration of his widows as his due. And I’ve had quite enough of men who think only of themselves, thank you.


She lifted her chin. “For shame, Markham—stealing away from a party, no doubt arranging another sordid liaison.”


His eyes flashed. “Not tonight, Clarissa.”


She searched his eyes—bleak, if she were not mistaken. She had the odd desire to run her fingers through his damp hair and pinch those sharply angled cheeks until the impish grin she hated returned.


He sighed. “I just want to go back inside and—”


He glanced down, sucked in, and slumped his shoulders.


Again, the baffling urge to hold him.


“If you would make my apologies to Lady Darlington, I fear I must return home and…” He snorted. “…change.”


“Later, Clarissa. Please. I haven’t the fortitude to suffer your quips at the moment.”


“Well—good night.” He pursed his lips and dropped his gaze to her feet. “And you needn’t wear any rouge, you know. You are just fine”—he flushed—“the way you are.” He turned on his heel and went back out the door.


Just fine the way she was?


Since when did Markham spend time considering the color of her cheeks? 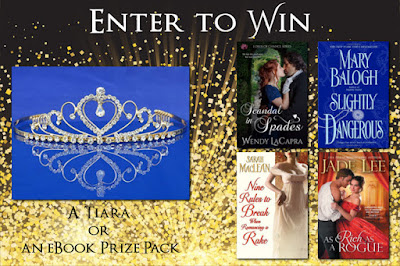 A Tiara - US shipping ONLY
eBook prize pack featuring the following titles:Scandal in Spades by Wendy LaCapra
Slightly Dangerous by Mary Balogh
Nine Rules to Break When Romancing a Rake by Sarah MacLean
As Rich as a Rogue by Jade Lee