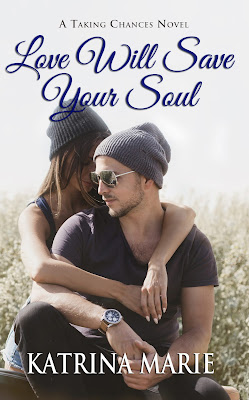 She never saw him coming.

After walking away from an abusive relationship, Sophia was determined to create a new, better, life for herself. Swearing off guys seemed like an easy task, until she started working at Life in Ink…

Adrian is done with relationships. When his fiance left him for the “picture perfect” life, he decided then and there, he wasn’t going to give his heart to another woman. That is, until the tattoo shop he works at hires a receptionist.

Sophia and Adrian can’t deny the chemistry between them. But when a threat from Sophia’s past comes knocking on her door, everything begins falling apart.

Can two people push through their insecurities and let love save them from themselves?

Prologue
Slivers of moonlight filter in through the blinds, illuminating the otherwise dark room. Dawson lies next to me, snoring softly. This is something I would have found adorable when we started dating. Now, it’s annoying that he can sleep peacefully. He should be the one wide awake, in turmoil over the words he’s thrown at me.
Instead, I’m the one curled up into a ball wondering how the hell I got here. It’s not how I envisioned our lives together. When we first moved in together, everything was perfect. We spent time together every night, and I knew he adored me. Now… now, I’m always waiting for the other shoe to drop. Never knowing when something I say is going to set him off. Every day is like walking on eggshells, hoping he’ll be in a good mood.
If my parents knew how badly my relationship has gone downhill, they would be appalled. Dawson has never laid a hand on me, but the verbal slams pain me almost as much. A shard of glass, glinting in the corner, catches my eye. It’s a small reminder of pissing him off earlier this evening because I didn’t fold his laundry the way he likes it. The vase hitting the wall before shattering will forever be etched into my mind. I should be used to it by now, the sound of whatever he can get his hands on hitting the wall. But it’s not something I should ever have to be accustomed to.
Everyone has an opinion about how they would react if they found themselves in this sort of situation. They will never truly know the fear that courses through you at the thought of leaving. The lengths a person like Dawson will go through in order to keep you by their side. The I’m sorry’s, and empty promises. All of it grooming you, cultivating you to do what you’re supposed to do, and stand beside them. Even when the very sight of them makes you sick to your stomach.
But no more. At least, not for me. I’m done being the person he takes out his anger on. No longer willing to be the one he uses to make himself feel big. I am better than this. I deserve more than this.
With one last glance at Dawson’s sleeping form, I gently climb out of bed. The bags I packed hours before he got home await me in the coat closet. Most would call me a coward for taking off in the middle of the night, but it’s the only time I can ensure that I’m going to get out with my dignity intact.
As quietly as possible, I pull my bags out of the closet and my keys off the key hook. Opening the door, I breathe in the cold winter night. My first taste of freedom in over six months. A voice from down the hallway stops me in my tracks.
“Going somewhere?” Dawson asks, voice scratchy with sleep.
Part of me wants to turn around and put my bags up. To beg for forgiveness and hope this isn’t the time he’ll begin using his fists. But I push that reaction down, determined to take my stand and be the strong person I know is hidden deep inside me. “Yeah,” my voice comes out in a squeak. Clearing my throat, I try again. “Yes, I’m going to my parents.”
“No, you aren’t,” he takes a step toward me, hands curled into fists at his side.
The urge to retreat courses through me. Dropping my bags and running for my car would be the easiest option. But… it could also end with me stumbling over something and hurting myself in the process. If I don’t stand up for myself now, there’s no guarantee I won’t come back to him later. It’s a vicious cycle, and one that I’m sick of. Straightening my back, I broaden my shoulders. I refuse to let him intimidate me the way he has. Refuse to let him think he can control me for one second longer. “Yes, I am,” I lift my chin higher. “I’m done, Dawson. This isn’t working for me. The yelling, throwing things at me… I deserve more than that. You aren’t the man I thought you were when we first moved in together. I won’t be your prisoner anymore.”
Tightening my grip on my keys in one hand, and my bag in the other, I step outside the door. This place is no longer my home. “Goodbye, Dawson.”
“You can’t just leave me, Sophie.” His voice is pained. “I’ll do better. Go to counseling. Anything.” The sad thing is, I’ve heard all this before. Things will be great between us for a week or two, then it’s back to the same old story.
“Sorry,” I close the door behind me and walk briskly to my car. Fear makes me want to look back, but I don’t. He’s not going to follow me. Not yet, anyway. I’m sure he’ll show up at my parents’ house with some sob story. But by then, it’ll be too late. They’ll know the truth of how my life has been. There’s no way Mom, or Dad, will let him come anywhere near me.
Unlocking my car door, I throw my bags into the passenger seat before sliding behind the wheel. A glance toward the apartment shows Dawson’s shadowed outline in the doorway. Without taking my eyes off the door, I start the car and put it in gear. It’s time to rebuild myself and put everything Dawson tore down back together. 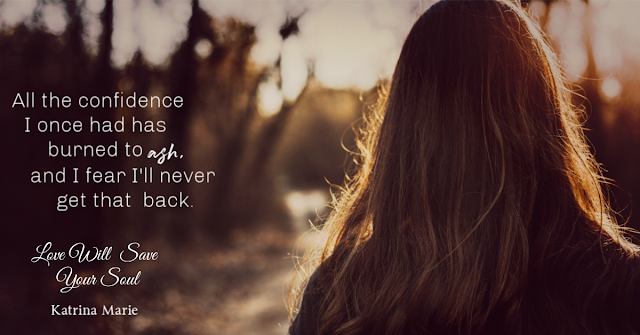 Katrina Marie lives in the Dallas area with her husband, two children, and fur baby. She is a lover of all things geeky and Gryffindor for life. 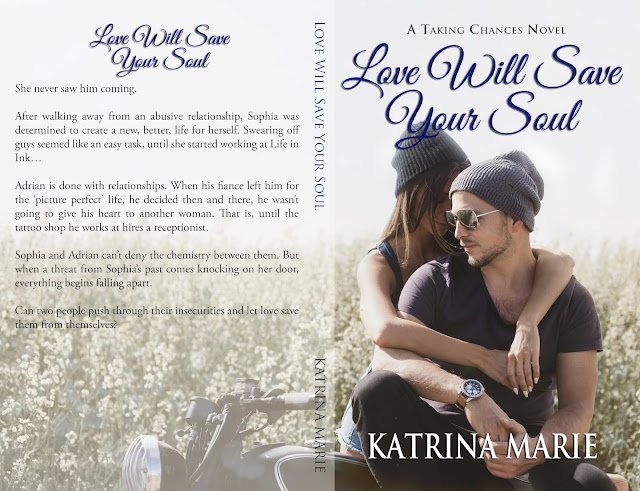