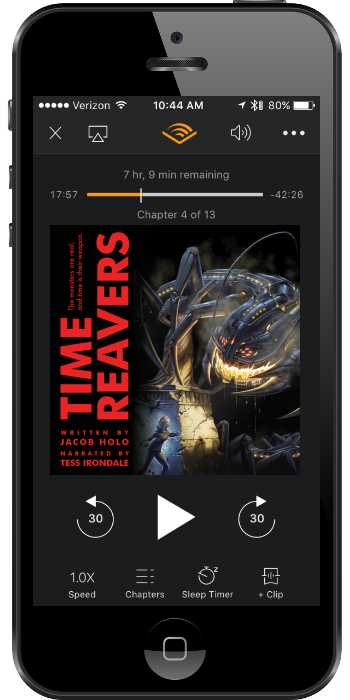 The monsters are real, and time is their weapon.

Fed up with bad teachers and daily fights with her sister, 16-year-old Nicole Taylor yearns for something better. Sadly, she's in for a letdown, because the world ends next week.

Nicole discovers she has a rare gift. She can bend time around her and even stop it completely. With her powers awakening, she must face the Reavers: horrific killing machines that exist outside our time.

Plagued with nightmares and ambushed by monsters at every turn, Nicole has one chance to stop their genocidal invasion. With help from a chain-smoking pyrokinetic, a neurotic sword-wielding assassin, and an icy goth chick with a crossbow, she may stand a chance.

But the Reavers are tireless foes, and time is on their side.

Jacob Holo is a former-Ohioan, former-Michigander living in sunny South Carolina. He describes himself as a writer, gamer, hobbyist, and engineer. Jacob started writing when his parents bought that “new” IBM 286 desktop back in the 80s. Remember those? He’s been writing ever since.

Tess​ Irondale​ is a professional audiobook narrator and voice actress, credited with bringing ​nearly ​5​0 titles to life. ​She ​specializes ​in ​Fantasy, Adventure, and Erotica, although ​her​ work ​has covered​ nearly every genre including Young Adult, Humor, Spirituality, ​LGBTQ, Sci-Fi, Self Help and ​Mystery​. ​She is on Audible's in-house voice roster, and ​also works directly with authors through ACX.​ When not in the recording booth, she can be found hiking in the woods or hunkered over a crossword puzzle.

It's Novel to Me

Pregnant, Barefoot, in the Kitchen