Who doesn't love a good game of BINGO, right!? Even better if it's Piper Rayne style BINGO and up for grabs are some AMAZING prizes! There's three ways to win! Check out the details below and good luck! 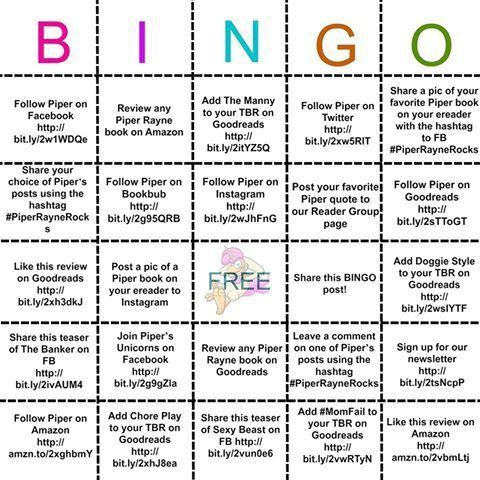 Up for grabs...
SINGLE LINE: ARC of The Manny & a SIGNED paperback of The Bartender.
Single Line Entry Form
'X': ARC of The Manny & an unsigned paperback SERIES of choice!
'X' Entry Form
FULL CARD: ARC of The Manny, a Kindle Fire, $25 USD Amazon Gift Card & a paperback SERIES of choice!
Full Card Entry Form
Bingo Card for Easy Link Access: http://bit.ly/2f0pyLO
This giveaway will run until days end September 30, 2017 and is open to anyone who completes the tasks and fills out the required google doc with their links. The entry docs ARE editable so you can keep going back to them every time you do complete a square.
PLEASE NOTE: Sharing or posting into our own group does NOT count as an entry.

Remember Charlie's brother Vance from Sexy Beast? Readers keep asking us, "Just what was he running from?" Well, all will be revealed on October 19th when The Manny releases!
If you haven't been paying attention in our Facebook group than you may not have seen that The Manny now has a blurb, a release date, and blogger sign-ups!
BLURB:
Secrets and lies are a killer way to start any partnership—especially a horizontal one.
Now, I’m a glass half full kinda of guy, so, after the ‘you’re fired’ speech was directed at me, I figure now’s the time to be the screenwriter I came to sunny California to be. Unfortunately, there are about as many people trying to sell a script in L.A. as there are vegans in the pacific northwest.
But lucky for me, a few weeks ago my agent found an investor for my script. Hooray, all my problems are solved! NOT.
Because the investor will only agree to fund my film if I use one specific actress. And that one specific actress? Well of course, it just has to be the same actress I screwed over only months before. But she doesn’t need to know about that one tiny detail, does she? All that matters is getting her to agree to do the film and I’ll do whatever it takes. We can leave the past, in the past, right?
I thought my charm would win her over. Never would I have been prepared for the terms she laid out on the table.
She needed a nanny.
I needed a lead actress.
Somehow I became The Manny.
ADD TO GOODREADS
Posted by Lynn's Romance Enthusiasm at 8:49 PM