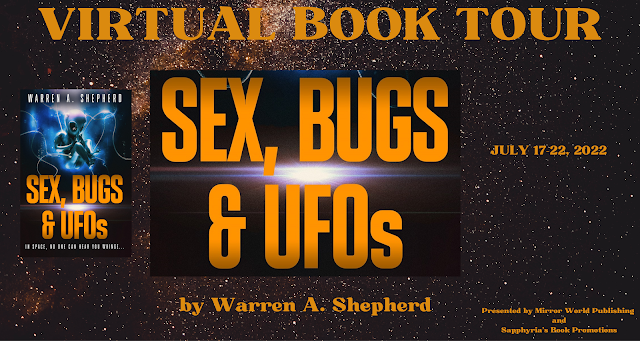 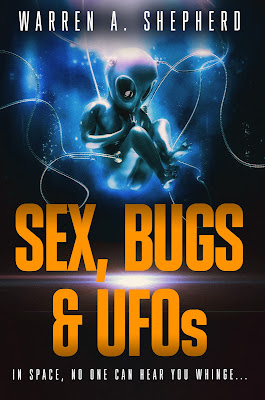 Publisher: ‎ Mirror World Publishing; 1st edition
Publisher Website: https://mirrorworldpublishing.com/
Publication Date: ‎ July 17, 2022
Print Length: ‎ 348 pages
ISBN: 978-1987976892
ISBN-10: 1987976892
ASIN: ‎ B0B3ZZ5PXK
About the Book:
Abandoned by his mum at the age of seven, former UFO investigator, Dave Morrissey, is coerced back into business to investigate a cold case that’s suddenly gotten hotter with the death of an old woman in a nursing home. As the questions begin piling up about her peculiar past, Morrissey must reluctantly enlist the aid of a shifty tabloid journalist with surprising insights into all things otherworldly.
Together, they uncover clues that paint a target on Morrissey’s back big enough to attract the sights of an unstable UFO conspiracy theorist, a cunning galactic bounty hunter, and a vicious terrorist for hire with nefarious designs on the secrets hidden in his DNA.
Morrissey’s desperate quest for the truth launches him from the grey streets of London, across the stars, and deep into the heart of an intergalactic mystery that will turn the idea of who he is and where he belongs in the universe on its head.
All Morrissey wants to do is find his way home but in space, no one can hear you whinge…
Purchase Links:
Mirror World Publishing:
https://mirror-world-publishing.myshopify.com/search?q=warren+a.+shepherd
Amazon:
https://amzn.to/3y7Uu5F
Amazon CA Ebook:
https://www.amazon.ca/Sex-Bugs-UFOs-Warren-Shepherd-ebook/dp/B0B3ZZ5PXK/ref=sr_1_4?qid=1655486266&refinements=p_27%3AWarren+A+Shepherd&s=books&sr=1-4&text=Warren+A+Shepherd
Amazon CA Paperback:
https://www.amazon.ca/Sex-Bugs-UFOs-Warren-Shepherd/dp/1987976894/ref=sr_1_2?keywords=Sex+Bugs+%26+UFO&qid=1655484992&s=books&sr=1-2
Kobo:
https://www.chapters.indigo.ca/en-ca/books/sex-bugs-ufos/9781987976885-item.html?ikwid=Sex%2c+Bugs+%26UFOs&ikwsec=Home&ikwidx=0#algoliaQueryId=43a7a32c2df9709a13ff0e1761b13bc5
Barnes & Noble:
https://www.barnesandnoble.com/w/sex-bugs-ufos-warren-a-shepherd/1141655074;jsessionid=5B68C9C1B0530958289C93562C3245C1.prodny_store02-atgap03?ean=9781987976892
Add to Goodreads:
https://www.goodreads.com/book/show/61306773-sex-bugs-ufos
Read an Excerpt:

Explosions sparked the midnight sky, strobing the darkness with a frantic glow. Fireworks, the humans called them and for some reason, saw fit to employ them in their year-end celebrations. A curious use of pyrotechnics to be sure, but Chendra Vaziil had been on enough worlds to know that every species had its idiosyncrasies; Earth was no exception. It was a primitive planet populated by a race not much more sophisticated than the animals they kept as pets; a race so bereft of vision they’d yet to break free of their solar system to any great purpose; a race so seething with violence that it existed in a constant state of war with itself. In essence, Earth was the perfect place for him to hide.

Vaziil was in the last stages of his transformation cycle. Within days his genetic pattern would be set, and his alien physiology would become virtually undetectable to the uninitiated, save for an archive of his core matrix. Certainly, it would pass the scrutiny of these intellectually stunted simians. He stroked the length of his arm, admiring his handiwork, though he hadn’t quite gotten used to the sponginess of the human epidermis. How these beings had endured for so long with such a fragile shell was beyond him.

The Earth woman, at least, seemed pleased by his appearance. She slept soundly at his side, satiated by their lovemaking, as she called it. He knew humans were often led by their primal urges, the drive to copulate amongst the strongest. Cohabiting with her provided a suitable cover while he acclimated to his new home — and his new body. Besides, the activities they shared weren’t altogether unpleasant. He flicked absently at the flaccid object dangling between his human legs, amused by its versatility. It was an adequate tool and the physical release it provided was surprisingly invigorating. There were worse things in the universe to endure.

Sounds in the hallway disrupted his thoughts. The woman’s living accommodation unit was one of six in the old building so ambient noise was to be expected. But something about the nature of these sounds pricked Vaziil in disturbing ways, ways he couldn’t quite put his newly human finger on.

As he pulled on his clothing, the realisation chilled him. He was on a strange world, interacting with a strange species. His senses thrummed with new experiences at every turn. Everything around him was alien to him. Everything around him seemed alien — except those noises. The weight of their footfalls, the rhythm of their gait, the simmering energy that surrounded them; it was all too familiar. Which could only mean one thing…

Too late. The door burst inwards, the sonic charges blowing the hinges away like dry leaves. Vaziil drew his arm up instinctively, protecting his delicate form from the shattering debris. The woman woke in panic, calling out the human name she knew him by. The room filled with smoke and noise, clouding his senses, but his attackers were no better positioned. Amateurs. In their attempt to catch him by surprise, they’d lost precious seconds waiting for the dust to settle. Vaziil used the confusion to his advantage, leaping over the screaming woman. He jerked her up from the bed, pulling her close to shield him.

Three figures poured through the doorway, their heavy weapons tracking mechanically toward him. They wore the distinctive cobalt body armour of the Thon Pahl Special Forces; not amateurs after all. Vaziil dragged the woman to the kitchen, grabbing the first weapon he could find — a spiral of metal she’d used to open a bottle of alcohol the night before. She squealed, the sharp sting of the tool piercing her throat, ever so slightly.

“Roger — what’s happening? What are you doing?”

But Roger was no longer there. Vaziil was operating on one hundred percent Holrathon instinct. 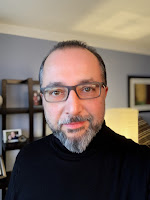 Warren A. Shepherd was seven when he first realized the world didn’t fit him quite right. Two sizes too big or two sizes too small, he couldn’t be sure. But having been transported from the streets of London, England to the streets of Toronto, Canada at such a young age left him with a profound sense of alienation — a boy with one foot in each world yet belonging in neither. The experience, however, did sharpen his sense of self-awareness and made him a keen observer of the human (and not-so-human) condition.

When he sees what humankind is capable of, both the good and the bad, he imagines how we would cope amongst the stars and is driven to tell stories of strange new worlds to try to explain the one that he often cannot.

After all, it takes an alien to know an alien… 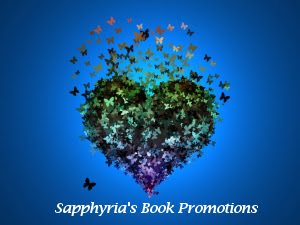 Sign up to be a tour host: Details and Sign Up Form
Posted by Lynn's Romance Enthusiasm at 7:00 AM