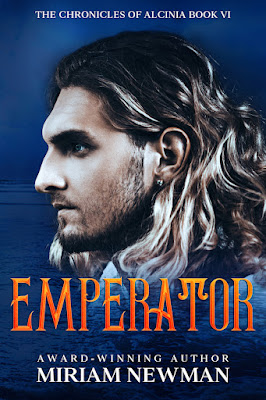 Disclosure of Material Connection: I received this book for review from Goddess Fish Promotions and the author. I was not compensated nor was I required to write a positive review. The opinions I have expressed are my own. I am posting this in accordance with the Federal Trade Commission's 16 CFR, Part 255: "Guides Concerning the Use of Endorsements and Testimonials in Advertising"

Son of a king, grandson of a general, Sergius is a warrior without equal.  It has been easy for him to be a hero when he was expected to be.  When he finds himself fighting to free his grandfather's country and the heart of a woman, he must be one because he is.

This was a story that was going to take me on an adventure right from the beginning. What is great about a fantasy is that anything is possible. The world is completely new and fresh. You won’t find anything in our history books. Our author uses pure imagination. She didn’t make me feel lost even though this is the first book of hers that I have read.

One good thing about following a blog tour is that you may find that you’ve discovered a new author and that you’ll be left wanting to see what else that person has written. Her characters sucked me in and made it easy for me to feel like I was there watching their days play out. War is never a happy subject to read about but for me, it was watching people maneuver in a world that doesn’t have some of the modern conveniences that I have access to. How do our differences effect their everyday life? Would we be able to exist in each other’s place?

It is a book that you will not want to rush through. Trying to put it down may become difficult. My area has been having a really nasty heatwave and this helped me take my mind off how uncomfortable the heat was making me. The sad part for me was how, at times, women were thought of and treated. But sometimes circumstances are such that complicated decisions have to be made.

The candles were guttering by the time he awakened, not in bed, but on a chaise in Giulia’s studio.  She had thrown a light cover over him and taken off his boots, all without him feeling a thing.  She was curled on the floor by his legs, arms around his knees, her cheek atop her arms, looking up at him, and he could see the reflection of dying flames in her eyes.  It was by far the closest she had ever come to any physical intimacy with him and he felt a surge of purely visceral pleasure and a cautious hope.

“What troubles you so much?”

“The Empiricum, of course.” True to his word, Yuri had established them as Empiratis, but Sergius thought Omana was better off without them.  They were a thorn in his side.  It was like doing battle with a shadow enemy.  He would have preferred outright warfare, but that seemed not to be the Omani way.

“Serious,” he said.  “One part of the treaty with Havacia they absolutely rebel against is the abolition of slavery.”

She stirred, a little uncomfortably.  “You do not have that in the North?”

“No, and we will not have it in the South, either.  Yuri will not abide it and I am in agreement with him, as are all the states that were enslaved by Domidians, except Omana.”

He nodded.  “They worked with Domidians then and they work with slaves now.  To do otherwise will cut into their profits.  They think to oppose Yuri on this.”

“Is that why he stayed?”

“He stays because the Army is here.  I have nominal control of it, but in reality, it will serve him.”

“He would arrest them?”

She looked relieved at first, but then she looked at his face.  “Oh.  I see.  No tribunals, even?”

“No.  He is my cousin, my King, and he is right.  He is adamant on this.  It is not negotiable, but the custom is so deeply ingrained here, I don’t think they are capable of envisioning anything different.  Yuri seldom loses his temper, but if they push him, I guarantee you that he will.  And there is a lot of his father in Yuri.”

She just looked at him questioningly.

“Uncle Vanus was a good King,” he admitted.  “Very effective.  But his enemies had a way of disappearing.   The Omanis may not love me next month as much as they do this month.”

“In that case,” she said, “it appears I must love you this month.”

She had spoken lightly, yet the look she was giving him was not light.

“Do you want to love me?” he asked softly.

Fantasy poetry driven by myths and legends has been my passion for as long as I can remember. I was published in poetry before catching the romance writing bug. I bring that background to my writing along with a lifelong addiction to horses, an 18 year career in various areas of psychiatric social services and many trips to Ireland, where I nurture my muse. My published works range from contemporary fantasy romance to fantasy historical, futuristic, science fiction and historical romance. Currently I live in rural Pennsylvania with a “motley crew” of rescue animals. You can see my books at www.miriamnewman.com.

Miriam Newman will be awarding a $20 Amazon/BN GC to a randomly drawn winner via rafflecopter during the tour.