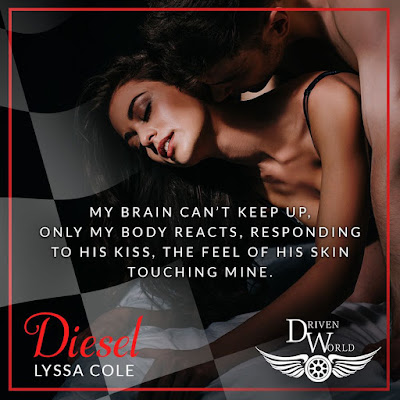 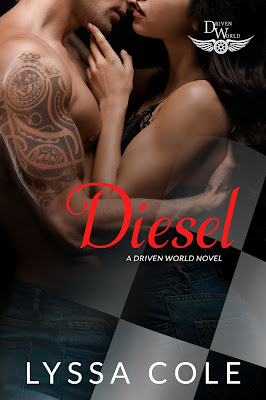 Luca DeMello- I hate him, he's sex, arrogance, and trouble rolled up in a race suit. My dad warns me to stay away... but I sign him anyways. So why does my heart pound and my skin prickle every time he looks at me?

Neveah Walker- She gets on my nerves. She's a woman in a man's world. Who cares if she has curves for days, smells like heaven, and is bossy as hell?

He’s the latest and greatest in the motorsports world. Killer driver, makes a ton of cash, and everyone wants to sponsor him. Too bad he’s got a bad reputation and an even worse attitude.

She’s the one trying to help her family business. Hell bent on not letting anything come between her and her career.

But when Luca performs less and demands more of Neveah, will she be the one that loses? Or will he be without one of his biggest sponsors?

Lyssa Cole’s Diesel is a sexy, angsty, enemies to lovers contemporary romance in K. Bromberg’s Driven World. It features cameos from Colton and Rylee, with Luca being a part of Colton’s race team at the Auto Club Speedway in Fontana, California.