Mercenary
Gangsters of New York, #3
Bella Di Corte
Publication date: November 13th 2020
Genres: Adult, Romance, Suspense
Rating:  4 Stars
Told in the first person.  Alternating persons.
Disclosure of Material Connection:  I received this book for review from Xpresso Tours and the author. I was not compensated nor was I required to write a positive review. The opinions I have expressed are my own. I am posting this in accordance with the Federal Trade Commission's 16 CFR, Part 255: "Guides Concerning the Use of Endorsements and Testimonials in Advertising". 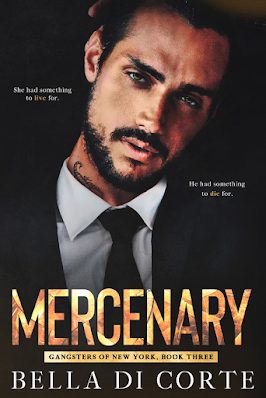 Synopsis:
I had something to live for.

The moment I saw him, I knew.

His eyes would hypnotize.
His lips would speak the most beautiful promises.
His body? Made for pleasure.

But if Corrado Capitani thought that he could fool me into thinking he was a good man, he was wrong.

The moment I saw him, I knew the truth.

Those eyes hid his poisonous heart.
Those lips were vessels of deception.
That body? Made for inflicting pain.

He wasn’t sent from heaven. He was sent to drag me back to hell.

I had something to die for.

Alcina Parisi had a price on her head, and she’d eluded the best. She thought no one would ever find her, but I did. Everyone in our world called me Scorpio–the man who never let the enemy go. But she was a weapon, not an adversary, and I’d claimed her as mine.

Mercenary is the third of three books set in the savage world of the Gangsters of New York series.

My Thoughts:
The author gives the reader a list of her cast of characters.  It should tell you that this series should be read in order.
Corrado has been given a directive that he’s not pleased with.  Even at the saddest moments, theirs is a harsh life.  Alcina is uncertain as to what her future will hold.  She’s not afraid of it just a little leery and apprehensive as to what may be in store for her.
Corrado may not have the best and stable job but he shows he has a heart.  Alcina is willing to let go of what’s happened in the past in order to let love into her heart.  Their story seemed what some would call old fashioned.  Although I hope that some will call it romantic.  The author doesn’t romanticize Corrado’s job but she does make the connection between our couple seem an old-world type of romance story.  I felt like the soundtrack of some of the Godfather movies should be playing in the background.  Even when things get a little intense there’s still some sense of romance – even if it does seem a little crazy.
This story did seem as if it was moving slower than the first two and that’s part of what got me thinking about the movie.  I almost felt like I should be watching it in black and white.  It’s not a page-turner kind of book but even if you put it down for a little while, you’ll eventually want to pick it up to see what the author did with her characters.  It’s a long story too so I’m sure the author will understand.  But after starting to get to know her characters how can you not want to find out how everything ends.

Bella Di Corte has been writing romance for seven years, even longer if you count the stories in her head that were never written down, but she didn’t realize how much she enjoyed writing alphas until recently. Tough guys who walk the line between irredeemable and savable, and the strong women who force them to feel, inspire her to keep putting words to the page.

Apart from writing, Bella loves to spend time with her husband, daughter, and family. She also loves to read, listen to music, cook meals that were passed down to her, and take photographs. She mostly takes pictures of her family (when they let her) and her three dogs.

Bella grew up in New Orleans, a place she considers a creative playground.

She loves to connect with readers, so don’t hesitate to email her at belladicorte@gmail.com if you’d like to reach out.