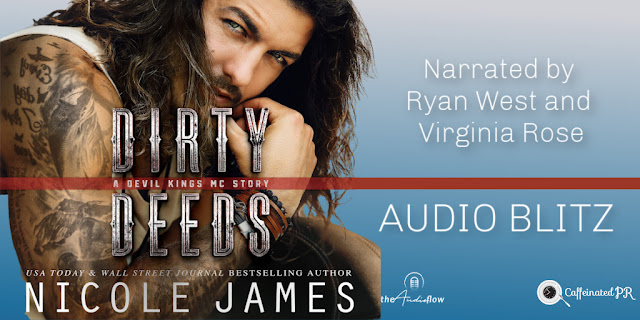 Today I am excited to be taking part in the Dirty Deeds Audio Blitz. The Devil Kings MC Series by Nicole James delivers romance, suspense, and characters you’ll root for. Check out the audio narrated by Ryan West & Virginia Rose, then enter to win a signed copy of the book! 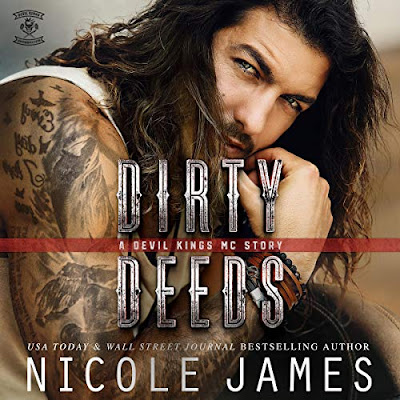 Disclosure of Material Connection: I received this book for review from Caffeinated PR and the author. I was not compensated nor was I required to write a positive review. The opinions I have expressed are my own. I am posting this in accordance with the Federal Trade Commission's 16 CFR, Part 255: "Guides Concerning the Use of Endorsements and Testimonials in Advertising".

Kara Harbinger’s only crime is having a court judge for a father, one who just happens to be presiding over the criminal case of the president of the Devil Kings MC. The DKs are about to use the biggest Achilles’ heel he’s got to bend him to their will, to buy his decision, to buy his very soul.

Reno: I want nothing to do with this job, but I can’t get out of it. As a member of the Devil Kings MC, my life is a violent existence hinged on loyalty to the oath I took: Devil Kings before all else. I’m the club’s muscle, the brother they give the vicious, vile jobs, the dirty deeds. When it comes to my club, I do whatever they ask, whatever they need.

Then I see Kara, all sweet and innocent with her soulful eyes and sexy body. She’s a bright light in my dark existence. In her eyes, I see an escape from the brutal life I’ve lived for so long, a life void of feelings, emotions, and light. She gives me the faith to believe I can have more, to believe I can have everything.

What do I do when my VP wants her taken as leverage to use against her father? What do I do when one look at Kara threatens everything I thought I held dear? What do I do if they want me to put a gun to her head and end her life? I’ll have to convince her to trust me if I have any hope of getting us both out of this alive.

Kara: He’s the only one who can save me. I’m not supposed to want a man like Reno. He’s dangerous – a lawless, badass, alpha biker. I know I should be afraid, but the way he looks at me, with hunger in his eyes makes me want to become his.

I believed the lies he told me. I thought he was a good guy. But when he takes me hostage, everything I thought about him is turned on its head. Now he expects me to trust him, even as he holds me captive. How can I trust a man whose loyalty is to his club, a club that wants me dead?

This just may be a series that I want exclusively in audiobook form. We have two voice actors that suck me into what is going on and I didn’t want to let go.  It was frustrating when I had to stop because there was never any perfect spot.  As I got toward the ending, I got nervous that there won’t won’t be any more audio versions.  It will be tough but I will switch over to the book version if I have to.

Mr. West and Ms. Rose do a great job in expressing the emotion, which includes fear and frustration, as well as the heat our characters are experiencing.  They also made it very easy to imagine what the characters might look like.  One thing I liked about this pair is that they were very easy to listen to.  With a book, it’s not hard to close and walk away to be picked up at a future point in time.  With an audiobook, you can take them everywhere you go.

Another thing that’s good about voice actors is you focus on who they are portraying – like a movie you can’t see.  You won’t want to tune them out because you’ll want to know what Reno and Kara are talking about and what trouble they’re trying to get out of.  They help me get to know who these characters are.  They also help me understand what’s going on with the world around them.

I finished the book with at least three sure things.  The first would be that I plan to check out more works narrated by Mr. West and Ms. Rose.  They compliment each other so I hope to find more duets but I’ll happily check out anything they’ve worked on.  The second thing is following this series because I have to see who else in this MC that I’m going to learn about.  Plus I’d like to see if Reno and Kara make an appearance as the series develops.  The third thing is our author.  I’ve only read/listened to a few of her books but I look forward to adding more to my library. 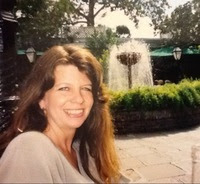 Nicole James is a USA Today and Wall Street Journal bestselling author who loves writing about hot alpha men who’ll do anything for the women they love! Her stories are filled with struggle, conflict and real human emotion. She is the author of the Evil Dead MC series, the Brothers Ink Tattoo series, The Devil Kings MC series, and more. Join her mailing list to be the first to receive cover reveals, release information, giveaways and more! 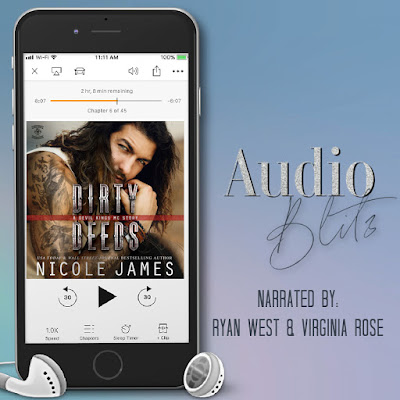