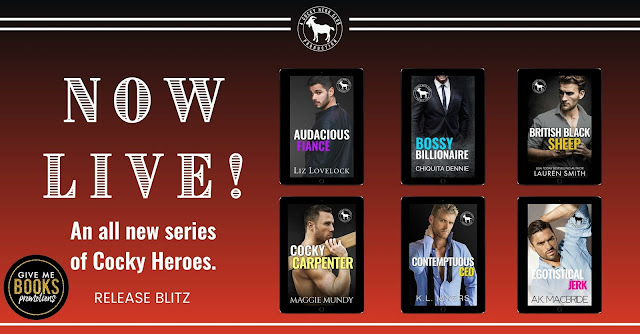 I had one goal: To learn from Sebastian Ryker.

He was an award-winning physician in his field of medicine.

A genius who could diagnose you with the barest of symptoms.

The best of the best.

Too bad he turned out to be an egotistical jerk.

Mere hours into my first day, I realized that the man I had idolized for years didn't live up to the hype.

He was rude, arrogant, and totally full of... himself.

It was clear that my presence bothered him, that I was nothing more than an irritation.

So, why did I want to melt into a puddle whenever those dark eyes were trained on me?
And why didn't I listen when my head warned my heart that he'd break it in two?

I had one goal: To learn from Sebastian Ryker, not fall in love with him.


Ethan West is a man of few words. He justifies nothing for no one. He's determined to enter the political race in New York. Not even an astute and gorgeous woman as Maya Armstrong will stop him. A bitter ex-lover blows up his playboy lifestyle to the media and tries to ruin his chances with any woman that enters his life.

Maya's reputation precedes her on and off the screen. As the host of Spotlight with Maya, it’s her job to take people to task and hold them accountable, but when billionaire banker turned candidate, Ethan West, sits on her proverbial couch, sparks fly in more ways than one.

They both try and prove the other wrong throughout the campaign, but a past ex's and a one night stand may cause more drama than neither one wanted to see.

Find out what happens when two alpha personalities collide! Will their rift end his campaign, or will it be the beginning of something much, much bigger, like romance?

Alexander (Xander) Livingston left college with the dream of becoming CEO of his uncle's technology company. Nine years later, all his dreams have come true. All except for one: marrying the love of his life.

Madison (Maddie) Hightower had always been a loner until Xander came along. Devastated after he left her behind to chase his dreams, she focused all her energy on becoming president of a digital software company – the same business Xander is slated to take over. Even after all these years, her attraction for Xander is still sizzling and palpable. He still makes her heart sing, but she isn’t sure if he feels the same way.

Xander is interested in the merger for two reasons. The first is the potential for growth in the digital market, and the second is a chance to reconnect with Maddie.  He’s never forgotten her. She was supposed to be by his side as he climbed the corporate ladder, and now he has the opportunity to swoop in, buy the company, and have Maddie working under him. Literally.

But Maddie had a secret. One she never told Xander when he left her in California and headed to the East Coast— a secret she never thought he’d ever uncover.

The merger of their companies will bring Xander face to face with Maddie’s life-altering betrayal. How he handles this discovery will determine the future for both and decide the fates of these two star-crossed lovers.
Purchase Links:

He is exactly the kind of man Brie Honeyweather swore never to love…or lust after ever again: a sexy, arrogant, British bad boy in a designer suit. Alec is the last person Brie wants to be stuck on an international flight to London with, but hey…at least they’re in first class.

When their flight has to make an emergency landing in a snowstorm just before Christmas, Brie and Alec are thrown together in a single bedroom in a tiny English village. As the snowstorm rages outside, things get intense and emotions and lust run hot. Alec reminds Brie just how much she misses being with a man and how easy it is to fall head over heels too fast.

What should have been an amazing one-night stand turns into a week-long secret romance at Alec’s family estate when Brie realizes her new boss is Alec’s mother, a British countess. While Brie tries to focus on writing a Christmas book with the countess, all she can think about is getting back into bed with Alec.

She shouldn’t fall for the arrogant brit, especially when their lives are oceans apart and neither of them wants a serious relationship. But Christmas magic has a way of working miracles. Maybe Santa will bring her a happy ending after all…
Purchase Links:

Years ago, he broke me.
Now he’s back with a proposition.
He needs a fake fiancée, and I’m the one he’s come to.

Audacious— that’s how I would describe him. He was my first love, my first kiss, and my first heartbreak, from which I never truly healed.

Kane was once the man of my dreams, on paper—strong, handsome, and a complete charmer.  But the problem is, he has never given a damn about anyone but himself.

I’ve never witnessed a desperate man until Kane knocked on my door with literally the proposal of a lifetime.

I must admit, it’s ironic he’s come to me given the way things ended between us.

It’s possibly the worst idea ever, but I need the money. How do I not fall for Kane all over again and risk history repeating itself? Only time will tell.


Disclosure of Material Connection: I received this book for review from Give Me Books PR and the author. I was not compensated nor was I required to write a positive review. The opinions I have expressed are my own. I am posting this in accordance with the Federal Trade Commission's 16 CFR, Part 255: "Guides Concerning the Use of Endorsements and Testimonials in Advertising".


A year in Australia working as a doctor sounds like a great idea to Autumn. She can escape the cold English weather, her ex-husband and a stalker. A year to get her life back together and not have any romantic involvements.

‘Love them and leave them wanting’ is Brett’s motto. That is until he sees Doctor Autumn Blake. This lady just might get through that tough layer he has built around himself.

Can the sexual chemistry they feel be just that, or could it be more?

Is one year long enough for these two people to forget their pasts and grab onto a chance of love or will they lose it forever.
Purchase Links:
AMAZON US / UK / CA / AU

The author has written a note to her readers about this book that you will need to pay attention to.
Autumn may have physical challenges but that doesn’t stop her from what she loves. She’s come to realize that she needs to spread her wings.  Brett may be cocky but at least he cares about his health.  And he’s proud about the work he does.  He’s also opened his heart to possibilities.

This is a book where you will laugh with the characters as well as at them.  They also both seem to like the outdoors as well as taking a chance on having an adventure.  It’s a story about getting out of your comfort zone in order to experience the world around us and doing things you probably would never do.  We also have two characters that can feel there’s a connection growing but what will they do about it.

Our author does a great job at showing that people are not different just because they have a disability.  They eat like we do; they hold down jobs like we do, and they want some of the same things we do too.  She gives me the chance to experience some of what Australia has to offer without leaving the comfort of my living room.  It was a quick read which you can finish in just a few hours to a few days depending on how your schedule for the day goes.  If you are like me and have not read any works by this author than you just may have found someone new to follow.