Disclosure of Material Connection:  I received this book for review from Bare Naked Words and the author. I was not compensated nor was I required to write a positive review. The opinions I have expressed are my own. I am posting this in accordance with the Federal Trade Commission's 16 CFR, Part 255: "Guides Concerning the Use of Endorsements and  Testimonials in Advertising". 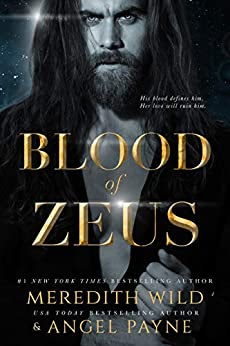 An ancient grudge. A forbidden love.

The only thing worse than being a demon is being a Valari. As an undergraduate at Los Angeles’s Alameda University, Kara Valari can sometimes succeed at forgetting she’s both. Lost between the pages of the classics and tucked into the shadows of lecture halls, she can dodge the paparazzi’s lenses as well as her family’s publicized dramas—not to mention their private expectations. She has one more year to feed her true passions. Then she’ll be expected to fulfill a much darker destiny.

Cursed with inexplicable strength and godlike stature, literature professor Maximus Kane knows all about darkness. Every day he’s reminded of the missteps of his childhood and the devastating consequences they’ve had on those dearest to him. To atone, Maximus spends his nights alone and his days submerged in the quiet life of academia. His existence has become a study in control, and he’s become a master at it—until Kara Valari walks into his toughest course.

Viscerally, Kara’s everything he craves. Logically, she’s everything he rejects. She’s a starlet of privilege. She’s also a student. And after one touch, he can’t deny that she’s awakened something in him that may never go dormant. Nothing about her makes sense, but everything about her feels right. Especially in the deepest strands of his DNA, which are still shadows of mystery to him—a mystery Kara seems determined to uncover.

She’s Hollywood royalty. She’s forbidden fruit. And he’s pretty sure she could be the answer to everything. Kara has started a new semester but this will be like nothing that came before.  Maximus is a man who garners attention.  Right from the beginning it was not hard to see/feel the connection these authors have created.  I liked the add of the unknown as part of the storyline.  It may make you wonder what could be hiding in plain site.

We also have a mystery that helps to move the story along.  There’s some heat that boils just below the surface that can’t help but pop out every once-in-a-while.  I like to read certain mysteries and these two ladies remind me why.  There’s no way I’m going to figure how things are going to come out.  That’s a good thing because there’s no way I’ll stop reading until the very end.

I like reading these authors individually but wow they pack a punch when they write together.  And having experience the ending, I know that I’m going to have to follow this series to see what else they can come up with.  But sadly I have a few months before that will happen. Meredith Wild is a #1 New York Times, USA Today, and international bestselling author. After publishing her debut novel Hardwired in September 2013, Wild used her ten years of experience as a tech entrepreneur to push the boundaries of her “self-published” status, becoming stocked in brick-and-mortar bookstore chains nationwide and forging relationships with the major retailers.

In 2014, Wild founded her own imprint, Waterhouse Press, under which she hit No. 1 on the New York Times and Wall Street Journal bestsellers lists. She has been featured on CBS This Morning, The Today Show, the New York Times, The Hollywood Reporter, Publishers Weekly, and The Examiner. Her foreign rights have been sold in over 23 languages.

USA Today bestselling romance author Angel Payne loves to focus on high-heat romance starring memorable alpha men and the women who love them. She has numerous book series to her credit, including the action-packed Bolt Saga and Honor Bound series, Secrets of Stone series (with Victoria Blue), the intertwined Cimarron and Temptation Court series, the Suited for Sin series, and the Lords of Sin historicals, as well as several standalone titles.

Angel is a native Southern Californian, leading to her love of being in the outdoors, where she often reads and writes. She still lives in Southern California with her soul-mate husband and beautiful daughter, to whom she is a proud cosplay/culture con mom. Her passions also include whisky tasting, shoe shopping, and travel.

You can also reach Angel via: