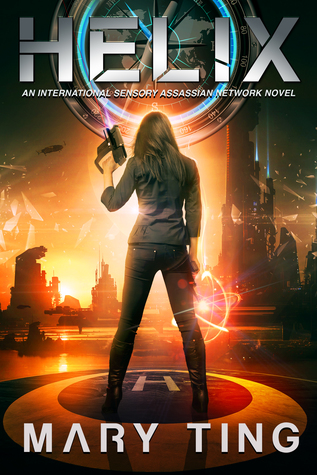 Alliances are forming. The resistance is growing. Everything is about to change.


With her memory still fragmented, Ava returns to the International Sensory Assassin Network (ISAN) to find the twin sister she never knew she had.
But as Ava hunts for information, she finds herself tangled in a web of yet more lies and conspiracy. The Helix serum may not be required to access her superpowers, and the number of male assassins—previously considered too volatile to tolerate Helix—is growing in every territory.
The more Ava uncovers, the more of a threat she becomes to ISAN. Her only salvation may be to join the rebels—if she isn’t killed first.

The lively tune from violins, flutes, clarinets, saxophones, and horns bounced from wall to wall as everyone formed into lines, women in one and the men in the other. I followed suit and eyed Brooke doing the same toward the front.
With my right hand slightly raised, I matched to my partner with a smile. We made a circle around each other and moved on to the next. Then I did the same with several more partners.
One thing good about having a mask on, it was easier to trick others into thinking I was paying attention to them while I scanned the perimeter. Mr. San remained where he had made his speech, with guards surrounding him.
When I spotted a familiar man down the line, I forgot to breathe. My heart ricocheted and no amount of air in my lungs seemed enough. There was always a possibility, but why take the risk? Was I just seeing what I wanted?
The man, a crisp, black tuxedo hugging his muscular form, held my attention. Fitted over his sleeked-back hair was a unique black mask with a layer of complex embellishments—sharp angles, gears, and knobs. The half-face mask revealed high cheekbones, the masculine curve of his jawline, and lips that would make any woman jealous.
I swayed to the side with my current partner and as we turned, he delivered me to my next. My pulse raced faster. The mysterious man was next, but he didn’t seem to notice me. My heart sank at the thought that he might not be Rhett.
Maybe I had imagined the similarity. Maybe I wanted that man to be Rhett, even if his being here would be a disaster.
The tempo slowed and harps played the lead. My partner bowed and backed away to give space to the next. The man with the cool mask bowed, and I curtsied. My palm touched his, and a warm, electric tingle traveled through my center.
His earth-and-citrus scent filled me when our bodies touched after one complete turn. We pulled apart, and then I dared to look at him directly. Those amber sunburst eyes locked with mine.
I stared and stared, afraid if I blinked he would disappear. It seemed perhaps he felt the same from the intense way he looked at me.
My pulse quickened, and I forgot the dance and why I was here. I had felt this before—so raw and powerful—it knocked the breath out of me. The ache began in my chest, growing, stretching, tearing through every layer until it robbed me of sight.
Rhett’s final cry after he jumped into the trash chute without me echoed in my ear, and I felt the depth of his pain, for it was mine too. Rhett was here. My Rhett was here.
My face flushed. I shuddered a breath and almost sobbed with relief. He was fine. Alive and well. I wanted to hold him tight and never let go, but the other part of me wanted to slap him for making me worry.

International Bestselling, Award-Winning Author Mary Ting writes soulful, spellbinding stories that excite the imagination and captivate readers all over the world. Her books run a wide range of genres and her storytelling talents have won her a devoted legion of fans and garnered critical praise.
Becoming an author happened by chance. It was a way to grieve the death of her beloved grandmother, and inspired by a dream she had in high school. After realizing she wanted to become a full-time author, Mary retired from teaching after twenty years. She also had the privilege of touring with the Magic Johnson Foundation to promote literacy and her children's chapter book: No Bullies Allowed.
Mary resides in Southern California with her husband, two children, and two little dogs, Mochi and Mocha. She enjoys oil painting and making jewelry.