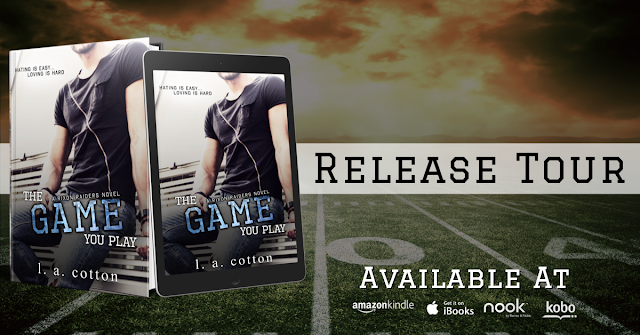 THE GAME YOU PLAY BLOG TOUR

Welcome to the blog tour for The Game You Play by L A Cotton. 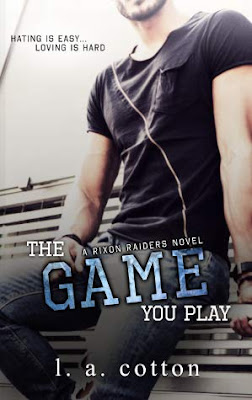 Lose her virginity.
Meet her knight-in-shining-armor and fall in love.
Have the best senior year a girl can have.
The only problem? Her knight isn’t a saint, he’s a villain, and she’s pretty sure he’ll destroy her before ever handing over a piece of his heart.

Win State and go down as one of the most successful Quarterbacks in Rixon Raider history.
Head off to college and pursue his dream of being drafted to the NFL.
Avoid the girl under his skin. Felicity Giles, his stepsister’s best friend and perpetual pain in his ass.

She’s annoying as hell.
Quirky.
She’s a game to him, nothing more.

Until his arch rival comes after him and the few people he cares about ... and Felicity gets caught in the crossfire. 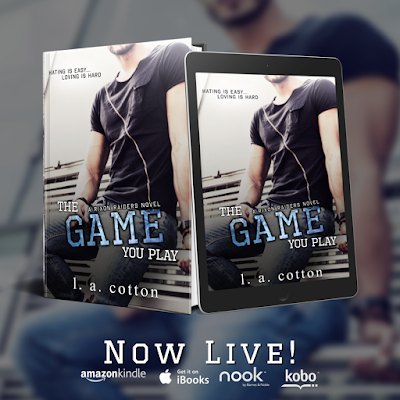 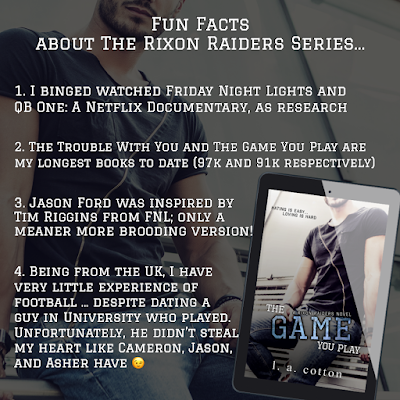 Felicity Giles is going through what a lot of girls her age do. But then she also has things going on in her life that hopefully not a lot of girls her age do as well. Jason Ford seems to be the man around campus. He’s a young man with attitude. This story seems more college level than high school. The teens seem to do some things that in real life wouldn’t fly. Then we have the adults. They do things that in reality they shouldn’t be doing. But not all the adults are bad and sometimes they even come out with some sage advice.

The book is coming out at the perfect time of year since its football season. If you’re a mood setter, why not put one of the college games on in the background. Or better yet, go visit one of your local high school’s games and see if maybe you can envision the Raiders and one of their rivals out on the field. Possibly you’ll see Felicity and Hailee up in the stands somewhere.

Maybe you’re a fan of a couple of series – one is titled Friday Night Lights and the other is called All American. Would this series fit right in? Could you picture waiting for it every week and wonder what the teens of Rixon would be up to next? Can you picture what actor/actress would play one of this author’s characters? Would it make a comeback for the soap opera – bring in some new blood? Make it seem more real than over the top and unbelievable? The other two shows never interested me but if I knew that Rixon was going to have a shot, I just might see if they stay true to the stories or try and change things – and that’s what ruins it for me every time. But there’s this little thing and it’s what’s going to happen with Asher – I just have to know. Now if you don’t know who that is, you haven’t been following the series. And if you don’t know anything about this author, her stories are addicting. 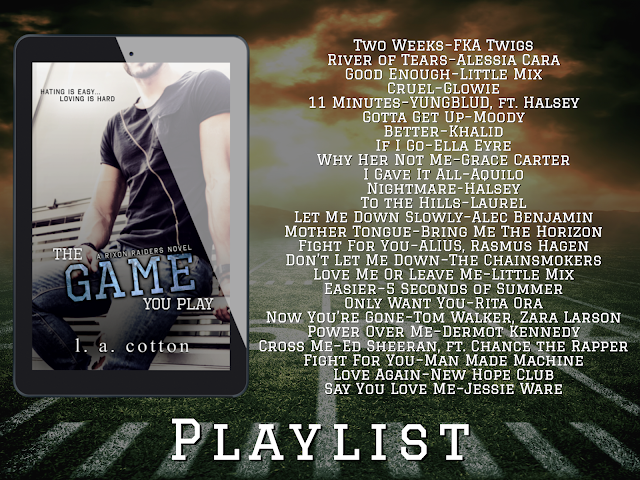 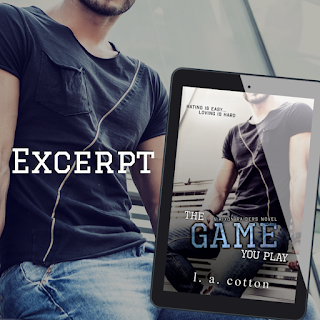 If you opted to share an excerpt, please find the text below:

I did hate him.
I hated that he made me feel so alive, so desired.
I hated the way he knew exactly how to kiss me, touch me, to get me to fall at his feet.
But most of all I hated how I didn’t hate him, not even a little bit.
“Relax,” he said as if he knew I was all up in my head. “If it makes you feel any better, I hate you too.” His thumb brushed my neck slowly before he chased his touch with his lips. “I hate how I can’t stop thinking about you.” Kiss. “I hate that you say the most ridiculous things.” Kiss. “But most of all I hate that Thatcher and his goon had their hands on you. I hate...” His lips touched my skin again as my heart crashed against my ribcage.
This wasn’t the plan.
He wasn’t supposed to say all of this, to feed the small part of me dreaming of a different time and place. A time and place where Felicity Giles could ever end up with a guy like Jason Ford.
I waited for his words, greedy for more. But they never came, replaced with hot kisses as he dragged his tongue up and down the hollow of my throat. Disappointment flooded my chest but deep down, I wasn’t surprised. Jason would never admit the truth. That there was something between us. That this was more than just sex. And for as much as it hurt, maybe it was better this way.
His hands were all over me now, his mouth the same.
“Jason,” I said, gently tugging his hair. “Slow down.”
He lifted his face, brow arched. I took advantage of the moment, pushing my hands against his chest to move him back. Then I fumbled around to find the recline handle and pulled.
“What the fuck?” he grunted, and I stifled a giggle. Jason needed control. He needed to hold all the power. But this time, I wanted to be in the driving seat.
I wanted to drive him wild.
“What game are you playing, Giles?” he asked, his hands gripping my hips as I gently rocked above him. We both groaned, and another thrill shot through me. He was at my mercy now.
With my newfound confidence, I hooked my hands into the waistband of my leggings and pushed them down over my hips. It was no easy feat getting them off, but I managed. If Jason noticed my clumsy striptease, he didn’t comment, his hooded gaze too busy eating up every inch of my bare skin.
“Fuck, you’re beautiful,” he whispered.
Yeah, fuck. His words were like a poisoned arrow through my heart.
As if he noticed my hesitation, challenge glinted in his eye. He was ready to pounce, to take back the power and flip this whole thing on me. But I wasn’t backing down. I wasn’t just a pawn in his game.
I was the goddamn queen.
And this queen wanted her king to kneel at her feet. 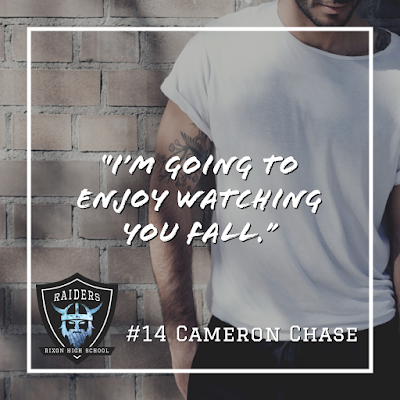 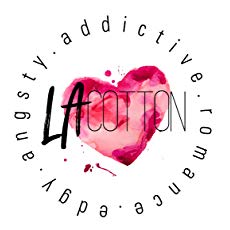