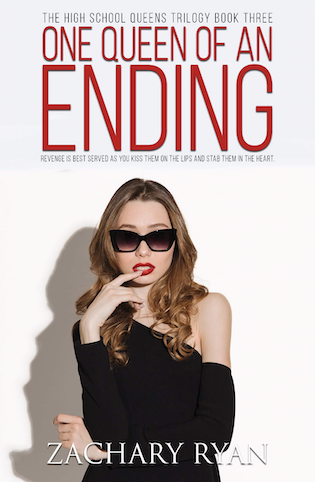 It’s time to say goodbye to our Johnson Prep favorites before they all head off to college.
After the gossip-worthy events of graduation and the shocking death of one of their classmates, it seems The Queen of Queens wants to give Danielle, Bethany, Calvin, Tucker, and Aman one last hurrah.
Will everything have a happy ending, or will one of our favorites end up 6 feet under? How will the war end with the salacious arrival of returning students, Andrew and Jasmine? They all had one lesson left to learn: Just because high school is over, doesn’t mean the high school drama ends. They’re all about to take their curtain call, but will it end as a comedy or a tragedy?

Discover this sultry and thrilling end to the High School Queens Series.

Aman smiled when he saw his video hit two million views. He scrolled down and saw a comment that he wasn’t too thrilled about.

Congrats on your new video trending at number seven. Quick question, how much did that cost you? Oh, Aman, we know your daddy is paying for these views and subscribers. It’s rather pathetic since you’re doing it for his love and admiration. We hear that the camera adds ten pounds of bullshit to your personality. We know you love to fake it like you have happiness in your life. – The Marked Queen.

Aman locked his phone and threw it in the locker. This was supposed to be his moment, but the bitch was taking it away from him. He also knew a part of him hated that he was fighting with Calvin. The one person that he wanted to share this with, he couldn’t. He wanted to believe that Calvin had the strength for both of them, but he wasn’t sure their foundation was strong enough right now.

Aman, maybe you shouldn’t be pushing away the man that loves you, but you learned that trait from your father. You wanted to be the biggest YouTube sensation, but you needed to accept the truth. Your videos are fake, and you’re just another bullshit actor. The only problem was, what would happen to you once you were pulled off the stage? We thought tomatoes were more your style than roses. After all, your performance has been less than subpar at best.

Zachary Ryan grew up in a black-and-white box in Maryland, before moving to Chicago to start a new life. There, he found that he was accepted for his misfit status--and learned that it's perfectly normal to spend your twenties feeling lost and confused.
After a disastrous sexual encounter, Ryan stumbled on a group of true friends, or "soul cluster," that he connected with. Through his writing, he hopes to help other broken souls out there find comfort amid the chaos.