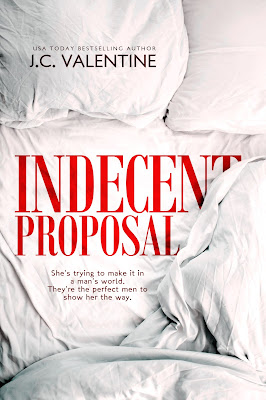 Sabrina Colloway was perfectly happy running her father’s business and bailing out the competition. Until one deal changed everything. Caught up in a complicated relationship had never been the plan. Hell, it hadn’t even been on her radar. Not to mention, shacking up with three of the company’s most eligible bachelors is just asking for trouble…especially when they’re brothers. But nothing risked is nothing gained, and Sabrina is about to embark on a whirlwind romance of the ages.

All good things must come to an end…

A woman at the top of the corporate food chain is controversial enough. If Sabrina’s secret romance with the Hargreaves brothers comes out, not only will she damage her glowing reputation with her father, the man she’s looked up to and emulated since childhood, she’ll destroy the very thing he worked his life to achieve. So when rumor has it that she’s been having a little extra fun on the side, Sabrina reaches the only logical conclusion: there’s a snitch in her camp—or three. Will she be able to prove that her newfound lovers are loyal to her, or will she discover that four’s a crowd?

Conner was waiting for her on the sidewalk, and he held out his hand as she approached. A sudden bout of nerves attacked her stomach as she accepted his offer and slipped her hand into his. With that self-assuredness she was quickly growing accustomed to, he led her inside the building to the bank of waiting elevators that would carry her to her loft.But he didn’t leave her there. “Eight, right?” he asked as they stepped inside and he pressed the button for her floor. She merely nodded.This was so unlike her, being so quiet and allowing the man to take the lead. Sabrina was used to being the dominate one, but something about Conner quieted that need in her to be at the helm. All night, she kept catching herself falling back and deferring to him. And she couldn’t seem to find a reason to hate it as much as she told herself she should.It felt…good.She couldn’t remember the last time she shut her mind off and allowed someone to take care of her, which was what he was doing. Conner and his brothers had seen to her safety, and now Conner was personally finishing it.When the elevator rolled to a stop, the doors parted and they stepped out together. Sabrina took over and pulled her keys from her clutch as they approached the only door on that floor.“This is me,” she stated the obvious.“Here, allow me.” Plucking the keys from her hand, Conner inserted the correct key on the first try, as if he’d done it a hundred times before, and opened the way for her.Battling with her uncharacteristic nerves and what she knew was right versus what she wanted, Sabrina edged past him into her apartment. Setting her clutch down on the waiting sideboard, she stepped out of her high heels and turned to see Conner standing in the doorway, his gaze traveling over the ordinary Victorian prints on the walls and simple furniture she’d handpicked from numerous flea markets and antique malls over the years. Everything was old and eclectic, and a world away from what she’d bet he was used to—sophisticated and expensive.Feeling her eyes on him, Conner’s eyes met hers. He didn’t look unsure of himself. Just…patient. As if waiting for the invitation he hoped would come. Standing there like that, he looked strong and sexy and she was reminded of how his body felt rubbing up against hers at the club, how his hands felt on her hips…and that kiss. Wow. She could still taste him on her lips… That one kiss hadn’t been nearly enough to whet her appetite, and the throbbing need in her core hadn’t disappeared but merely dulled during the ride over. Now it was growing again, rapidly, and the longer he stood there staring at her, the worse it became.“You should stay,” Sabrina blurted. When he just stared her down, she realized how easy she must appear to a man like him and suddenly felt embarrassed. Looking away, she tried to play it off. “Or not. I know your brothers are waiting for you—”He was on her in a flash, catching her words on a kiss that took her by surprise. Sabrina gasped, then melted into his arms as he pulled her into him and devoured her mouth as if he’d been waiting all night and couldn’t stand to let another second pass. 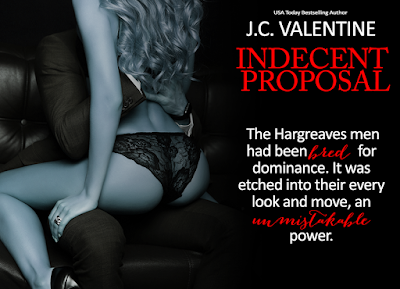 J.C. Valentine is the USA Today and International bestselling author of the Night Calls and Wayward Fighters Series and the Forbidden Trilogy. Her vivid imagination and love of words and romance had her penning her own romance stories from an early age, which, despite being poorly edited and written longhand, she forced friends and family members to read. No, she isn't sorry.

Living in the Northwest, she has three amazing children and far too many pets. Among the many hats she wears, J.C. is an entrepreneur. Having graduated with honors, she holds a Bachelor's in English and when she isn't writing, you can find her editing for fellow authors.