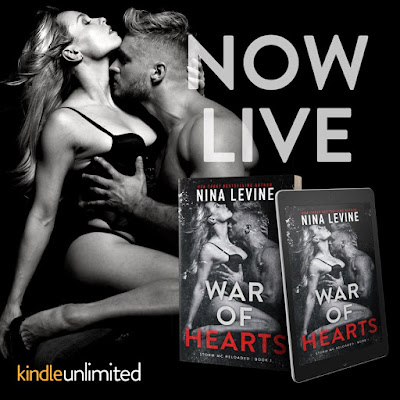 NINA LEVINE HAS A NEW STORM MC BOOK OUT!

War of Hearts is LIVE & FREE in Kindle Unlimited!!! 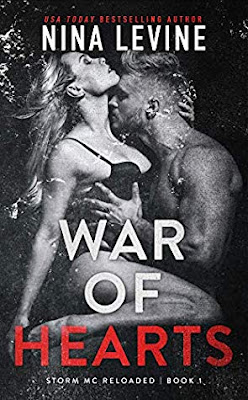 This is a FORBIDDEN MC ROMANCE.

I tried not to look at her.
I tried not to want her.
I tried not to love her.
But she won this war of hearts and now I'm a man on my knees.
This love may kill me.
My president will see to that.
No one touches his daughter.
He's removed me from her life.
He's sent me to hell where every day is a bloodbath.
If he thinks he's won, he's wrong.
Every battle is won before it's fought and she won this battle a long time ago.
I surrendered in our war of hearts and now I'll fight to the death for my queen.

"From beginning to end this story was simply superb. I cannot count how many times I yelled, threatened to punch a character, cried tears of sorrow and joy, was completely wordless or just sighed out of utter contentment." - Reading Is Our Satisfaction

Fury would be in the dictionary under bad*ss but it may be hard not to laugh at his expense.  I’m afraid the author made me do it – that’s my story and I’m sticking to it.  Zara Bennett just wants her pain to go away.  Your heart has to go out to a young woman that has a hard time coming to terms about something that was not her fault.

One thing I found interesting was how in some scenes the MC is referred to as its own entity.
I’m a little slow on some things and that was true here when I thought Fury was talking about a member of the MC but turns out he was talking about the MC itself.  The MC is a living, breathing thing.

The author takes her story one step further by putting in a twist that had me sit up and take notice.  She had me wondering what she has planned for our couple – where do they go from here.  I had a hard time finding a stopping point before that.  Once I got to the twist, it made it near to impossible to put the book down.

This story is two in one.  We have our main couple but then we also have Zara’s parents.  Our author makes the suggestion to read King’s Reign first and I think I would have to agree if you want to know how King came to be a part of Zara’s family.  But his story was told in two parts so you may also want to read King’s Wrath and then King’s Reign.

Our author split her story into two parts.  In the first part, Zara is just coming into womanhood.  Stuff happens and that’s where part two comes in.  There’s a space of time that’s missing between the two.  Some may not like the split but I can understand why Ms. Levine did it.  If she continued the story and filled in that time period, the story would have been too wordy and some readers may have lost interest.  Zara and Fury give you a little idea about some things that went on during that time.  So for me it makes sense and I didn’t mind the span where our characters were separated.  We get just enough about the club but it’s all about the world that revolves around Zara and Fury.  Their ending made me happy and then once I read King’s duet, I can revisit this one.