Pump Up Your Book Presents: There's Something Your Son Needs To Tell You by Vernon Ennels JR; #BookTour, #NowAvailable, #OutNow, #Review


Disclosure of Material Connection:   I received this book for review from Pump Up Your Books and the author.  I was not compensated nor was I required to write a positive review.  The opinions I have expressed are my own.  I am posting this in accordance with the Federal Trade Commission's 16 CFR, Part 255:  "Guides Concerning the Use of Endorsements and Testimonials in Advertising". 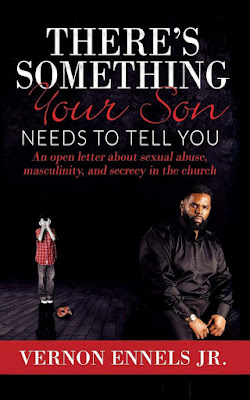 Page six of Vernon Ennels, Jr. book, THERE’S SOMETHING YOUR SON NEEDS TO TELL YOU, reads, “I still remember his face, his breath, and hear his voice demand me to  lie on my stomach. He would down my pants my mother so proudly dressed  me in. And then my Superman underwear…When he was done, he walked me to school and warned me, ‘If you tell anyone, I’ll kill your mother.’”

Author Vernon Ennels, Jr. lived with the horrible secret of being sexually abused and ashamed for some 40 years before he was able to recently summon the courage to tell his own family. “Studies show that one in six men have been sexually abused,” said Mr. Ennels. “Most are afraid to talk about it.”

This book reflects the experiences of males, specifically black males, but encourages both men and women and those from various racial backgrounds to recognize the signs of sexual and mental abuse and to combat the epidemic. “My book,” emphasized Mr. Ennels, “is a mirror of my abuse to shed light on an on-going issue to inspire others to take immediate action when they suspect child sexual abuse. #Saveoursons is my mission to help spread awareness and spark change to save current and future victims of sexual child abuse.”

Forty-something Vernon Ennels, Jr. says his new book THERE’S SOMETHING YOUR SON NEEDS TO TELL YOU  is an “open letter” that prompts other men to step forward and share their very own experiences of child sexual abuse in order to save other young boys from the hands of an abuser.

“My moniker ‘Save Our Sons’ encourages discourse and social activism to help boys and men who have been sexually abused,” said Mr. Ennels.  “Many, many people believed these victims were lying, making up a story for attention. Since I am a certified ‘non-celebrity’ I wrote my book for every child abuse victim out there who is terrified of stepping forward.”

Please make sure that you read the Dedication from this author.  It may give you a sense that he’s talking directly to you and I found that to be true throughout the book.  He’s using this forum to let some readers know that he understands their thoughts, feelings, and what they are going through.

In his Introduction, you can see how much love he has for his son.  He also makes comparisons between himself and his child.  One thing that was sad is that for a time he didn’t seem to love himself.  It also seemed as if some of the adults in his circle let him down.  They either didn’t recognize or didn’t want to believe that there was something going on.

It’s nice to see that the author felt comfortable enough to put his feelings on paper.  Years before our author’s abuse, it was something that wasn’t talked about and if it was than it was the victim’s fault.  But there has been progress made – it may have been slow but since it’s still happening changes still need to be made.

He shows that your past doesn’t always stay there.  Certain things happen in life and can bring that pain from where you thought it had been buried into your present.  Besides affecting your life it can also affect those around you.  I think that even though his story is gender specific anyone who has been through what he had to endure may get something out of what is within these pages.  There are also letters from other victims included in the end – shows their bravery and will hopefully help you speak out if you have not done so yet.  You can survive and have a life and not just exist in life. 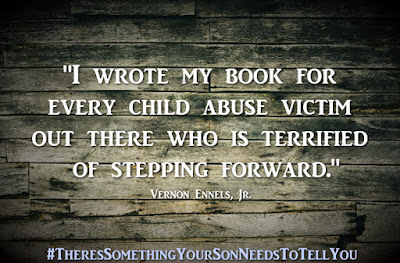 I went on living what probably appeared to be a typical childhood. I had friends, I played, and became a student known for his perfect attendance. Now, I know why. It was at school that I felt safe. If I was there, he could not hurt me.
Although I found security at school, it was only five days a week for a couple of hours a day. The other times, my mind was tormented. I needed an additional safe-haven, and that’s when I found church.
I was obsessed with being loved by my congregation and by age sixteen, I was ordained deacon.  But soon, I discovered a new form of abuse. I was taken advantage of and manipulated. And when I found the courage to share that I was sexually abused, I was told to “give it to God.” Sweeping it under the rug became my norm. I feared being labeled gay by my friends who grew up in a homophobic environment in the early 80s and grew resentful towards my father who abandoned me as a young child.
I struggled with romantic relationships, calling off two engagements and filing for divorce. But it was when my son turned six, the same age that my childhood trauma began, that I knew it was time for me to release my pain.
On my healing journey, I’ve developed an intimate relationship with God, sought out counseling, and found my voice. I am on a mission to expose sexual abuse, especially in the black male community where racism has led to toxic masculinity and silence around sexual abuse.
This is my open letter and I want others to find their voices to heal too as we end this epidemic. 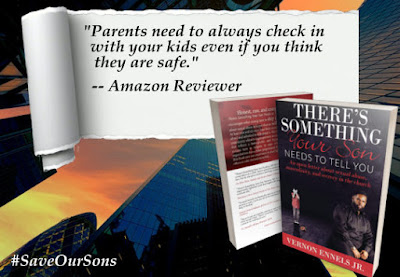 Vernon Ennels grew up in Baltimore, Maryland and now makes Arizona home for he and his family. After a long day at work in the business  world…he found that writing his book was most productive in the evening hours sitting by his swimming pool. Vernon holds a BS and an MBA in Business Management.  “I was inspired to write my book thinking of my own six-year-old son,” he asserted.

Posted by Lynn's Romance Enthusiasm at 10:15 AM