This post is part of a virtual book tour organized by Goddess Fish Promotions.
Click on the tour banner to see the other stops on the tour.
~~~~~~~~~~~~~ 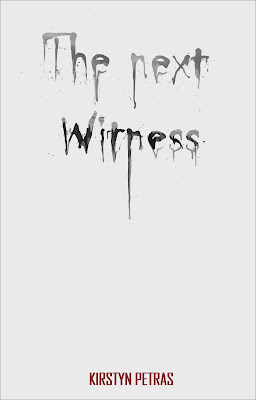 The Next Witness
by Kirstyn Petras
GENRE: Thriller

Alexander Covington is hunting a traitor: Melody Karsh, a missing girl accused of treason, a Party member who has forsaken her country. But, letters are appearing in mailboxes, being slipped beneath doors, and in the pockets of passersby. “Free Melody” is being spray painted on walls. Her image – cold, shivering, pathetic – has captured the public’s attention and sympathy.

Melody has no idea that her name is being used to start a movement, not until the executions of those demanding her freedom start airing on television.

Derek Lin would feel sympathy, if he didn’t blame Melody for the deaths of those who have disappeared without a trace, caught up in the investigation to find her.

Melody must choose to join the fight or stand aside. Derek will become a leader or break under the pressure. Alexander will decide how many bodies must fall to save his own life.

He released his foot from the man’s hand, watching disdainfully as his men half carried, half dragged the man away. He started to follow, but out of the corner of his eye he saw something that made him pause. He turned around and saw someone staring at him with large brown eyes completely devoid of any expression. The bottom half of the face was covered in a black and white scarf, and the hair was covered with a black knit cap. By the slight curve of the body, he guessed it was a girl hiding under the layers of baggy clothing. Then his eyes traveled down, and he saw the gun in their hand.

Pointed directly at his heart.

But then there was a yell from behind the person, and she whipped around, going to the aid of one of her fellow terrorists. She was pointing the gun at someone else.

Alexander felt himself stumble back, as though her looking away had released him from a spell. He should have had more bravery. He should’ve been able to move, to react, do something. But that look, beyond cold, had shaken him in a way he couldn’t quite describe.

He needed to get out of here, and away from whoever that was. And, he added a mental note, he needed to ask whoever they’d just taken in, just how many Party members they’d corrupted, or how many people Karsh had taught to use a gun.

Kirstyn Petras is a fiction writer and commodities reporter but primarily identifies as caffeine in a human suit held together by hair spray and sheer force of will. She currently resides in Texas, though claims home as a combination of New York and Edinburgh. When not writing, she trains contortion and aerial hoop. She has been published in Punk Noir, and is the co-host of Dark Waters, a literary podcast exploring all that is dark, ready, and wonderfully twisted.

Topic:  Do you rely on inspiration or research when writing a thriller? Are you into true-crime shows? Do they help you plot a story out?

I do like true-crime shows, but I tend not to really outline stories beyond knowing a vague idea for the beginning and end. It’s a combination of both inspiration and research - research when I need to make sure I get a historical fact correct, inspiration when the universe can be bent in a way that suits the narrative I want to tell. For example, the book I’m working on now needs to reflect some historical accuracy to the end of the California Gold Rush, so I want to make sure I get dates and use names that would make sense in that time. A lot of The Next Witness was shaped by my education and understanding of US politics. I received a Master of Arts with Honours in International Relations from the University of Edinburgh, and a Master of Science in Global Affairs from New York University. I think having that backing certainly helped certain aspects of the story - the building blocks to build a universe with some footing in reality, and then stemming off into what is fictional.

Kirstyn Petras will be awarding a $10 Amazon/BN GC to a randomly drawn winner via rafflecopter during the tour.