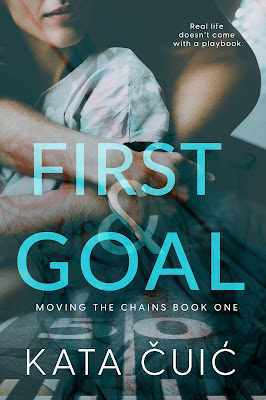 Eva Papageorgiou has one goal—to make it through her senior year of high school unseen and unscathed. When her strategy to stay out of the limelight is derailed by rampant rumors, she’s forced to change tactics. Her new game plan is to keep everyone at arm’s length. Especially boys. So when she’s partnered up in class with the hot as hell varsity quarterback, she pushes and pushes.

Until he pushes back.

Rob Falls just wants to fit in. With his teammates, with his friends, with everyone. His image as the quintessential jock makes him feel like a fraud. Especially since it’s the only reason all the girls at school want him, except the one girl he dreams about. She wants nothing to do with him. When he’s forced to tutor the class pariah, he realizes it’s time to get in the game instead of standing on the sidelines.

She’s going to help him get exactly what he wants, whether she knows it or not.

Kata Čuić lives in Pittsburgh, PA with her husband and three teens. No one told her life was gonna be this way. She holds a degree in Linguistics with a minor in Religious Studies from the University of Pittsburgh. Her plans of becoming a pediatric neurosurgeon were foiled by OChem 1. Fortunately, she’d been making up stories in her head since the days of her imaginary friend, Choosy. Putting pen to paper, er—fingers to the keyboard—came surprisingly naturally after her aforementioned teens decided it was time for them to cut their respective cords.

Kata writes everything from angst-filled YA series to standalone rom-coms and has been known to dabble in a bit of paranormal on the free stories section of her website. She believes nice guys shouldn’t have to finish last (except in the bedroom where she prefers an alpha between the sheets but a gentleman in the streets), and that the surest way to a woman’s heart is through laughter and food.