Disclosure of Material Connection:  I received this book for review from Silver Dagger Tours, the publisher, and the author.  I was not compensated nor was I required to write a positive review.  The opinions I have expressed are my own.  I am posting this in accordance with the Federal Trade Commission's 16 CFR, Part 255:  "Guides Concerning the Use of Endorsements and Testimonials in Advertising".

She’s a wildcat in bed and she’s driving me insane!
Ever since that first night I can’t get enough of Rahyne Andrews.
Her kisses, her body, her moans, drive me crazy. I can’t seem to say no to her.
My only problem is, that she doesn’t seem to be interested in more than my body.
And I’m not about to have my control taken away from me.
She either bends to my will, or I’m walking.

Grayson Carter is everything I ever dreamed of and more.
He’s built like a rock and knows how to satisfy my every need.
But the last thing I want is to have another failed relationship.
Especially, when it involves a member of the Hell’s Lovers.
I’m the one in control, I’m always in control…
So why is it that Grayson Carter is the only man who has ever made me beg for more.

Grayson “Gray” Carter is a man who loves two things – his MC and sex.  Rahyne “Ray” Andrews is all about living in the moment.  I find it interesting what characters this author pairs together.  She’s very good at what she does.

This story is just as hot as the first book.  It has more violence than Wolf’s story but nothing you can’t handle.  We also have two stubborn individuals.  It’s interesting to see who wins.  At the end I was happy to see that I only have to wait until August for the next book to come out.

During the summer months, we seem to be busy with kids out of school, trying to spend more time with family, and fit in some downtime in order to destress.  What’s great about this series is that you can read a book in just over an hour.  If you want a marathon read than it will be just a couple of hours.  I can picture reading these books again and having that marathon once the series is complete.  August can’t get here fast enough.

It was late when I entered my apartment. I sank down on the couch and stared out into the city. I lived in a high rise in downtown L.A., it offered a good view and it was near the club, I also owned the building. I had a few investments, mostly in stocks, so I did well for myself. I didn’t really have any family or anyone I truly cared about, except for Wolf and most recently, Scarlett. I used to do security for the military, and after retiring, Wolf gave me a place to stay and opened his doors for me. I was glad to have someone like Wolf. He’d been a good friend throughout the years. When he took over as President, he immediately named me VP, and it’s been that way for the last five years. The brotherhood was my refuge and although we didn’t voice it, we were a pretty tight knit family.
I stood up and went to grab a beer. I headed down the hall to my bedroom, where an empty bed awaited me. Usually it didn’t bother me, but lately I’d been yearning for a warm body to press up against. Specifically, a voluptuous blonde, with eyes the color of emeralds. My cock stirred and I sighed as I took a swig of my beer and sat at the edge of the bed.
Images of Rahyne spread out on my mattress kept flooding through my mind and they had been non-stop lately. It didn’t matter where I was or who I was with, I couldn’t get the temptress out of my head. It was starting to worry me.
I never even thought of settling down. I lived my life peacefully, went where I wanted, fucked who I wanted, and didn’t give a shit about anything. But with Rahyne...fuck, I thought my urgency to have her was just an infatuation-something that would go away in a matter of weeks. Six months later, and my body still craved hers, more now than ever before. Running my hands through my hair I fought my desire to go looking for her and I gulped down my beer.
Lying back on the bed I let her image envelop me and I pulled out my shaft-hard as a rock as usual-and stroked myself, remembering the sound of her sweet whispers, and the moans and whimpers I heard on an almost daily basis. I groaned, imagining the wonderful feeling of her tight pussy hugging my swollen member. Remembering the way she shouted my name, and how her body gripped me, made me jerk off harder. Knowing I could manipulate her body to such extremes had me grunting my release as streams of white fluid leapt out and landed on my stomach. I breathed out and splayed my arms on the mattress. Closing my eyes, I imagined her by my side, and the only thought that came to my mind, before I drifted off, was that I was going to make her mine.

Scarlett Chase is every man’s wet dream.
As soon as I laid eyes on her, I knew she’d be mine.
That is, until I found out she was untouchable.
One kiss, one forbidden touch, will have me out on the streets and stripped of who I am.
Yet I want her. I need her. And I’m done following all these damn rules.


Wolf Stone is my obsession.
Ever since he pulled over on that empty road, I’ve been tormented by the man.
His possessive words and heated looks have me tightly wound.
One touch, and he lights me on fire.
But I want more.
I not only want him in my bed, I want to keep him for myself.
But he won’t budge, and now it’s up to me to entice his sleeping wolf. 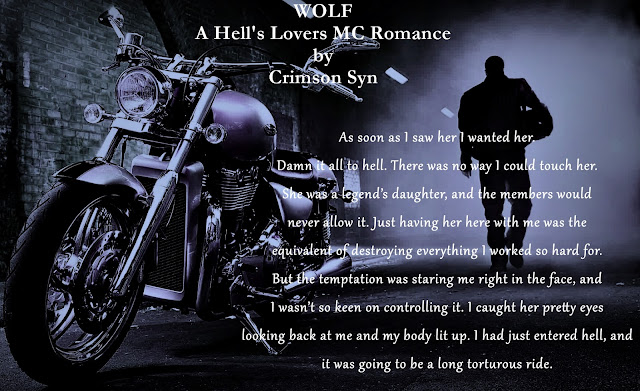 Scarlett Chase is a damsel in distress who helps the bad boy.  Wolf Stone is a man that when he sets his sights on something, watch out.  Just like the man expect this story to be hot.  The author lets you know who is speaking but I found that I stopped looking because I had no trouble knowing who was the main character of the scene.

This story is very hot, our main characters are hot, but Wolf’s life seeps into the story that shows the MC lifestyle is never far away.  And sometimes that involves violence.  But if you don’t like the graphic violence that a lot of MC romance stories have, you’ll be happy to know that you won’t find that here.  It was a great way to start the series.  More like a teaser of things to come.  Can’t wait to see where it goes from here.

“Wolf.” I breathed, dragging my hands along his tussled hair.
I felt the hot slickness of his tongue lick me from the base of my shoulder up along the curve of my neck. He stopped briefly before nipping my earlobe and I nearly came, right then and there.
“You taste so goddamn good.” He whispered.
I gripped his hair and whimpered. “Don’t stop, Wolf. Please, don’t stop.”
My words seemed to snap him out of his trance and he stepped away from me. I glided down the wall and a feeling of emptiness surrounded me as he moved away.
My hands reached for him, but he turned away. I could tell his breathing was labored, and he was just as, or even more affected by this, than I was. I reached out and touched his back and I suddenly found myself pressed once more against the wall. My body arched like a cat in heat, trying to bring every inch of him against me. The movement was futile as he gripped me by the shoulders and half shook me awake from my lust filled moment.
“Stop it. Stop, Scarlett. I won’t be able to do this if you don’t stop.” He pressed his forehead against mine and ran his hands down my arms, gripping my hips. His mouth said one thing, but his hands wouldn’t stop touching me. “Stop. Please.”
My body stilled at his request, but it remained thrumming alongside his.
“Don’t stop, Wolf. Please. Please, don’t do this.”
He dragged his rough jaw against my cheek and breathed in. “I can’t. I just can’t.” He squeezed his eyes shut, almost as if it hurt. He waited a few minutes, hid body vibrated against mine, and his hands continued to hold me. “I won’t have you wandering down here. You need to leave.”
“What?” I whispered.
He gripped my waist tightly. “I want you to leave, Scarlett. You don’t belong here!”
I rubbed my hands across the muscles of his chest and his breath hitched. “I don’t want to leave. I want to stay here. With you.”
He growled and leaned his body into mine. “Me too, gorgeous. Oh God, me too.”

My name is Crimson Syn, not really, but what fun is it to use my real name. Instead I’ll use my inner goddess’ name, it’s much more fun that way. I grew up in New York City where I had a wonderful education, loving parents and awesome friends. What more could a girl ask for?

So here I am, after reading so many wonderful stories, I have too many sinful tales of my own not to share. I like my alphas rough and possessive, and I have no shame in saying it or writing it. I had delightfully wicked teachers growing up, their books took me to new worlds and brought me new loves. So, I want to do the same for you. I want to indulge my readers in those steamy reads that will send them into the arms of dangerous alphas and deliciously sexy rogues, without leaving the confines of their nice warm bed. If I am able to entice your inner goddesses, then I have done my job and I am satisfied.

Follow the tour HERE for exclusive excerpts, guest posts and a giveaway!
a Rafflecopter giveaway