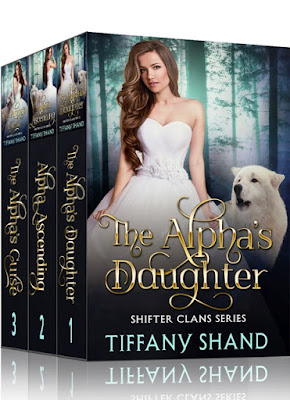 Blurb for Alpha’s Daughter:
After being kidnapped as a child, Christy Daine was sent away from her shifter clan to live among humans. For over a decade she has lived in fear of the people who tried to kill her. Living with her bodyguard, Ronan, the two embark on a secret relationship that could get them both killed.
When her father, the alpha of all the clans demands she return home to marry a man he’s chosen for her, Christy will finally have to face her past and her true nature. Danger lurks around every corner and even Ronan might not be the man she thought he was.
As the alpha’s daughter, can she really choose between the man she loves and the man she is supposed to be with? And who can she really trust?
Blurb for Alpha Ascending:
After watching her family be slaughtered by the man chosen to be the next alpha, Christy has to turn to the only people left on the island for help. The outsiders are considered outcasts by the shifter clans and were blamed for her mother’s death years earlier.
With Ronan imprisoned, no allies and nowhere else to turn, Christy must learn to trust the people she once viewed as enemies and discover who is really friend or foe. To do that Christy must learn to accept who and what she and discover secrets long buried among the clans if she’s to save Ronan and their future.
Only she can become the true alpha and bring the clans together before it’s too late.
Blurb for The Alpha’s Curse:
Christy should be happy now she’s finally with the man she loves, but enemies still cover the island sanctuary that the shifter clans call home. After discovering her brother may still be alive, Christy must go back to the man responsible for killing her family and into the heart of danger.


Now the alpha, she must find a way to stop the people who seeks to destroy all shifters, bring together the clans and the outsiders and stop the centuries old Alpha’s Curse before it can destroy every shifter in existence.

My Thoughts:
One good thing about buying this set is you have to read these books in order.  And in order to understand our main characters, you need to read each book in the order in which they were written.

The Alpha’s Daughter
Christiana “Christy” Daine seems a little uncertain of what she wants to do.  Ronan Walker is out to do what needs to be done.  Will these two have what it takes?  You will just have to read in order to answer that.

The author gets the reader’s emotions involved.  We will feel compassion and sorrow for Christy.  This is when you know that Ms. Shand has done her job.  You need something to keep you invested in the story so you will keep on reading.  Christy also has a strength of will that were in her shoes I don’t know if I would have that strength.

This is a story of discrimination just because of how you look.  It’s not a subject that’s in your face, or preachy, but it flows subtly through the story.  Children aren’t the only ones that bully.  But adults have to realize what they are teaching their children.  And sometimes it takes the child to right the wrongs of the adults.

Expect this story to end on a cliffhanger.  One good thing about this set is I can continue reading as if the cliffhanger is just a good place to stop.  Or as if it’s a blip as I go on to the next chapter.  Plus if you want to know what happens you have no choice but to continue.

Magda is a character that we see in book one but has more of a presence here.  She’s a woman of reason and strength.  When I think of Magda, I picture Maya Angelou.  This book shows that sometimes we need to investigate our past so that we can shape our future.  To continue the theme, this book also ends on a cliffhanger – get ready for book three.

This story is how the power of love can overcome almost anything.  It’s also how important inner strength can be when the time is right.  The story has a happy ending but not without sorrow or pain.  Expect this series to get your imagination going and looking forward to what this author has in store for her readers next.  It certainly had me hoping to see more of this world she has created here.

Excerpt from The Alpha’s Daughter:
Branches and twigs snagged on her clothes as Christy hurried out. She’d almost reached the edge of the clearing that led to the woods and out of the mansion’s grounds.
Someone blurred behind her and caught hold of her arm.
“Where do you think you’re going?” Alec demanded.
“You son of a bitch!” Fire formed in her hand.
He screamed when her magic hit him in the face.
Her claws came out, she felt herself starting to shift. She wanted to rip his heart out, tear him limb from limb with her claws and teeth then watch him burn. She shook her head, making her body stay in its human form.
Alec doubled over in agony.
Christy stared, dumbstruck. Had her rage turned into power?
“Christy, go.” Magda came up behind her. “Run!”
“I’ll kill you, witch,” Alex snarled.
“Ha, I’ve been protecting her longer than you’ve been in power, boy,” Magda snapped. “Go, Christy. Find the outsiders. They’ll help you. I’ll be right behind you.”
Christy stared at Magda, tears in her eyes. They both knew Magda wouldn’t be coming with her.
“No, I won’t leave you, Mags.”
An invisible force shoved her away. “Go, run!”
“I’ll come back to you, Magda. I promise.” She turned and fled.
Trees blurred along with tears as she raced through the forest. Her wolf demanded to be let out but she refused. If she let it out she knew she’d give in return to get revenge on Alec. When she reached the border, Christy stopped. A wolf flew at her, biting down on her arm.
Then another one came. Both shifters knocked her to the ground, mauling and tearing at her clothes.
She felt her own wolf at the edge of her mind, clawing to get out.
Both shifters tore into her flesh, trying to weaken her prevent her escape.
She went limp, knowing it was pointless to struggle. They ended their assault, and started dragging her back towards the mansion.
Christy raised her hand, felt her power flare to life and tossed fireballs at both of her attackers.
Bruised and bleeding she turned and ran for her life. 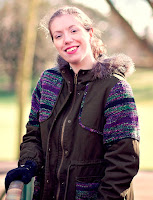 Tiffany Shand Short Bio:
Tiffany Shand started writing short stories when she was a child. She has always done writing in one form or another and started writing novels in her early teens.
Tiffany loves to read books and discovered her love for fantasy and paranormal romance.  She writes both non-fiction and fiction, and love helping writers to build their author platforms.
After doing a creative writing course in her early 20s, she is now a freelance writer and professional editor.
Tiffany lives in Essex with her two spoiled cats and one very nutty hamster.
Find Tiffany on:
Tiffany’s Website
Tiffany’s blog
Eclipse Editing
Facebook
Twitter
Goodreads
Posted by Lynn's Romance Enthusiasm at 10:00 AM