Cara Rossi’s life has been a mess ever since her identical twin was killed. She blames the mafia, its ways, and the people within the caustic culture for a painful reality that turned her world on its side. In an attempt to momentarily pause her misery, a night out puts her on a path with a man she shouldn’t get involved with simply because of his last name—Gian Guzzi.

He’s the kind of man that makes it hard to say no.

Gian Guzzi’s problems are piling up fast. A murdered grandfather, an unpredictable mafia, and a new boss that threatens both his family’s legacy and his life. As a Cosa Nostra underboss, Gian has a duty. First to la famiglia, and only then to himself. In the midst of the violent uncertainty that has become unrelenting in his days, Cara Rossi should only be a distraction for him to enjoy.
She’s a happiness that he was never allowed to choose before.

His lies.
This life.
Their love.

It all unravels eventually.

EXCERPT:
“Just so we’re clear on something, before we get to my place,” Gian said from the driver’s seat.
Cara hadn’t entirely heard him, as she was too busy watching the street pass her by.
“Huh?”
Cara glanced over at Gian as the Lexus slowed for a red light. His gaze caught hers, he flashed a grin, and then he was leaning over before Cara even knew what happened. The kiss came fast, stunning Cara momentarily. Something wicked, sweet, and hot curled in her stomach and shot down between her thighs.
She forgot they were at a red light as Gian’s lips moved against hers, slow and languid, yet still rough and demanding at the same time. She wasn’t quite sure how he did that, kiss her softly, yet managing to take her breath away with the gentle nip of his teeth to her bottom lip. The slight stubble on his jaw left the best sensation on her softer skin. His tongue warred with hers, a lingering taste of whiskey blooming over her taste buds before it too was gone, and so was his kiss.
The car lurched forward as Gian leaned back into his seat, that grin of his still firmly in place. The light had turned green again. “Pay attention to me now.”
Cara swallowed hard. “You’re very good at distractions.”
“So I’ve been told.”
“What was that you were saying—about knowing something before we got to your place?” Cara glanced out the window, thinking it would help to clear the haze. “Let me guess, don’t snoop, and be out before morning. I can do that.”
Gian laughed, drawing Cara’s attention back in an instant. “Not even close.”
“Oh?”
His gloved hand—covered with black leather driving gloves—found her thigh, slipped high enough to disappear under the skirt of her body-con dress, and then grabbed tight. Cara’s muscles jumped at the sudden touch, but somehow, she didn’t move otherwise. It had grounded her.
Then, his hand moved higher, his pinky stroking over the lace covering her sex.
Cara needed air.
Badly.
“You can leave whenever the hell you want, but while you’re with me, there’s only one thing that matters. This is mine for the night,” Gian said, his pinky stroking along the seam of her lace-covered pussy again. She shuddered under the pressure of the touch, surprised at how her body reacted to such a simple thing. “It’s mine. When and how I fuck it, and how many times I make you come tonight—that’s all mine. Understood?”
His grin had turned sexier under the dash lights.
“Cara?” he pressed.
God, she really needed that air.
“Understood.”
Or, she’d figure it out.
Apparently, Gian intended to start teaching her right fucking then. His hand came back out from between her thighs, and he flipped his palm up on her lap. “Unclasp the wrist for me and pull the glove off, would you?”
“Why?”
“You’ll see.”
Cara did as he wanted, setting the driving glove aside. Once the item was out of his way, Gian’s hand was back up under her skirt, his fingers slipping under her panties, while his other hand stayed firmly on the wheel. His gaze stayed on the road, too.
First it was a simple stroke of his fingers—testing and feeling along her folds. Then, it was two of his fingers sliding fast into her pussy, the sound of her wetness sucking his fingers in deeper as her inner walls clenched around the intrusion.
How was she that wet already?
“Damn,” Gian said, the edges of his lips curling with satisfaction, “you’re soft like silk, Tesoro. And soaked, too. Tight as fuck.” His fingers slipped out of Cara’s sex with a slowness that damn near killed her, before the very tips found her clit and started working the nub with quick, rough circles. Cara let out a hard breath at the change in sensation, her legs tightening to his hand. Never once did Gian look away from the road. “Has it been a while?”
She did not want to answer that question.
Her mouth worked before her brain did.
“Too long.”
“Has anyone ever made you come in a car, going twenty over the limit, in the dark, on the highway, Cara?” 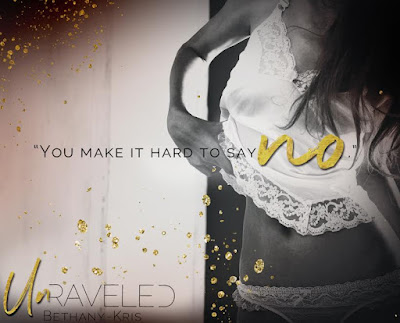 Bethany-Kris is a Canadian author, lover of much, and mother to three young sons, one cat, and two dogs. A small town in Eastern Canada where she was born and raised is where she has always called home. With her boys under her feet, snuggling cat, barking dogs, and a hubby calling over his shoulder, she is nearly always writing something … when she can find the time.

To keep up-to-date with new releases from Bethany-Kris, sign up to her New Release Newsletter here: http://eepurl.com/bf9lzD