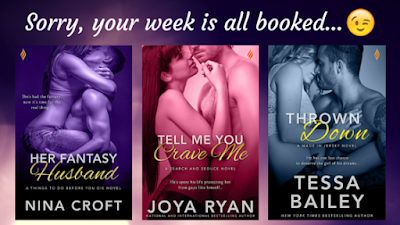 Forget the latest binge watch on Netflix. Skip that do-I-really-have-to-be-here meeting. Ignore those dirty dishes. Brazen's serving up three mouth-watering new heroes you won't want to miss. Everyone is talking about them... why not you?

Her Fantasy Husband by Nina Croft 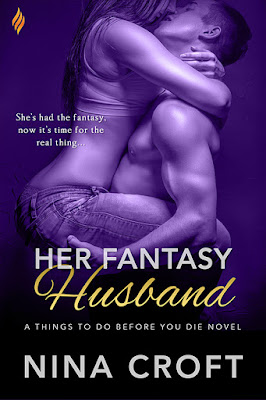 She’s had the fantasy, now it’s time for the real thing…

Security Company CEO Josh Slater put his life on hold when he said “I do” to protect a stranger. While his marriage was never meant to be real—he hasn’t evenseen his wife in five years—Josh can’t shake the idea that he’d be cheating if he moves on. Now he’s a man with a mission: chase down his “wife,” get an annulment, and finally indulge in a little no-strings sex.

Heiress Alexia Slater entered into a marriage of convenience straight out of high school to gain control of her inheritance before her not-so loving family squandered the whole thing. She doesn’t want the marriage to be real—she’s fought hard for her independence—but that hasn’t stopped her from spending the last five years fantasizing about her gorgeous husband.

Then he shows up.

Josh wants an annulment. Lexi needs to stay married. When the chemistry explodes between them, there’s no stopping the battle of wills only one of them can win…

Bring home your copy of HER FANTASY HUSBAND:

Nina Croft grew up in the north of England. After training as an accountant, she spent four years working as a volunteer in Zambia, which left her with a love of the sun and a dislike of nine-to-five work. She then spent a number of years mixing travel (whenever possible) with work (whenever necessary) but has now settled down to a life of writing and picking almonds on a remote farm in the mountains of southern Spain. Nina writes all types of romance, often mixed with elements of the paranormal and science fiction.

Tell Me You Crave Me by Joya Ryan 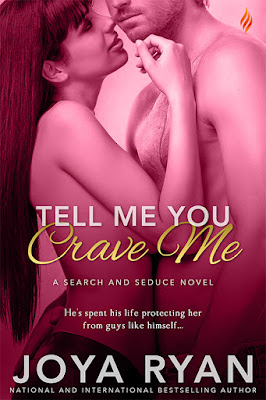 Easton Ambrose has spent half his life protecting Natalie St. Clair from guys like himself. It’s not like he wants to interfere with her dating life, but what’s he supposed to do when she insists on going out with the wrong kind of guy? Kiss her, of course. But now she's pissed. And what starts as an apology turns to heated words...then just to heat.

Jumping East was the worst idea in the history of ideas. The guy is Natalie’s older brother’s best friend, the definition of off limits. But she’s tired of the safe guys who couldn’t light a fire with a flamethrower. Time for a little dangerous—even if dangerous always blows up in your face. Because even if they survive their bedroom antics, it’s only a matter of time before they’re caught…


Bring home your copy of TELL ME YOU CRAVE ME:

National and international bestselling author Joya Ryan is the author of the Shattered series, which includes Break Me Slowly, Possess Me Slowly and Capture Me Slowly. She has also written the Sweet Torment series, which includes Breathe You In and Only You. She loves writing spicy Brazens which include The Chasing Love Series. Passionate about both cooking and dancing (despite not being too skilled at the latter), she loves spending time at home. She resides in California with her husband and her two sons.


Thrown Down by Tessa Bailey 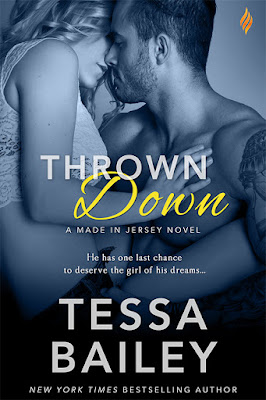 Overachiever River Purcell was never supposed to be a struggling single mom, working double shifts just to make ends meet. Nor was she supposed to be abandoned by her high school sweetheart, breaking her heart into a thousand jagged pieces. Now Vaughn De Matteo is back in town, his sights set on her...and River is in danger of drowning a second time.

No one believed Hook’s resident bad boy was good enough for River. Not even Vaughn himself. But he’ll fight like hell to win back the woman he never stopped loving, to keep the daughter he never expected, and convince himself he’s worth their love in the process―even if he has to rely on their fierce and undeniable sexual chemistry.

But even as River's body arches under his hungered touch, the demons of the past lurk in the shadows. Waiting for Vaughn to repeat his mistakes one last time...

Bring home your copy of THROWN DOWN:

Tessa Bailey is originally from Carlsbad, California. The day after high school graduation, she packed her yearbook, ripped jeans and laptop, driving cross-country to New York City in under four days.

Her most valuable life experiences were learned thereafter while waitressing at K-Dees, a Manhattan pub owned by her uncle. Inside those four walls, she met her husband, best friend and discovered the magic of classic rock, managing to put herself through Kingsborough Community College and the English program at Pace University at the same time. Several stunted attempts to enter the work force as a journalist followed, but romance writing continued to demand her attention.

She now lives in Long Island, New York with her husband of eight years and four-year-old daughter. Although she is severely sleep-deprived, she is incredibly happy to be living her dream of writing about people falling in love.

Email ThisBlogThis!Share to TwitterShare to FacebookShare to Pinterest
Labels: @BrazenBooks, Contemporary, Literature & Fiction, Made in Jersey Series, Mature Content, Romance, Romantic Comedy, Search and Seduce Series, Things To Do Before You Die Series