Breaking hearts is what wild and rebellious Mason Kincaid does best. Hit it and quit it is his motto, and with his bad boy reputation and tattoos, he doesn't lack for female companionship. Until one hot night with the one woman he swore he'd never touch becomes an all consuming addiction he can't kick. Katrina Sands has been his best friend for years, but now that he knows what she feels like, and tastes like, there is no going back to being just friends. Hot, dirty sex has never felt so good...or so right.

About Carly Phillips and Erika Wilde: 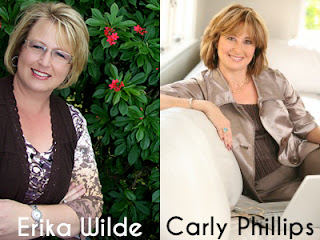 Carly Phillips is the N.Y. Times and USA Today Bestselling Author of over 50 sexy contemporary romance novels featuring hot men, strong women and the emotionally compelling stories her readers have come to expect and love. Carly is happily married to her college sweetheart, the mother of two nearly adult daughters and three crazy dogs (two wheaten terriers and one mutant Havanese) who star on her Facebook Fan Page and website. Carly loves social media and is always around to interact with her readers. You can find out more about Carly at www.carlyphillips.com.

Erika Wilde is the author of the sexy Marriage Diaries series and The Players Club series. She lives in Oregon with her husband and two daughters, and when she's not writing you can find her exploring the beautiful Pacific Northwest. For more information on her upcoming releases, please visit website at www.erikawilde.com. 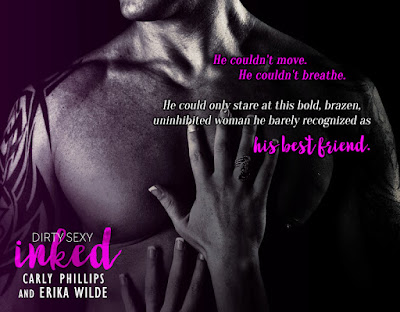 "WE'RE OFF TO Las Vegas, Kitty-Kat," Mason Kincaid said as he rubbed his hands together in anticipation. "Sin City is the perfect place to get down and dirty and have some fun. What kind of trouble do you think we can get into while we're there?"
Katrina Sands buckled her seat belt and settled more comfortably in the first-class leather seat next to Masonóher best friend since they were fourteen and freshmen in high school. She wasn't at all surprised that he was already making a mental list of all the wild and reckless adventures that awaited him in a no-holds-barred place like Las Vegas. Mason Kincaid was a rule breaker, a thrill seeker, and a self-indulgent bad boy who was all about pleasure and instant gratification. From everything she'd heard about the city that never slept, he'd be right in his element.
Oh, joy, she thought with a resigned sigh. It wasn't as though she was a prude. Far from it. She just wasn't thrilled about watching her best friend's man-whoring ways in action in Vegas. She spent enough time seeing it up close and personal on a day-to-day basis.
She turned her head and met Mason's bright blue gaze. "You do realize that this trip isn't all about you and your dick, right? That we're heading to Vegas because your brother Clay is marrying Samantha?" she asked, reminding him of that one important detail.
The corners of his mouth curved with an indulgent grin. "Of course I realize my brother is strapping on the old ball and chain tomorrow afternoon. But that doesn't mean the entire weekend is going to be all wedding, all the time. In fact, tonight Levi and I plan to take Clay out to make sure he spends his last evening as a bachelor in style."
Which gave Mason the perfect opportunity to carouse for a willing female to take back to his hotel room for the night. It's what Mason did. For as long as she'd known him, he'd had a hit-it-and-quit-it motto when it came to women, and he always made sure they knew the score up front. He didn't make promises or do commitment or anything longer than a one-time fling.
And each time Katrina watched it happen, a little bit of hope died inside of her. The hope that one day Mason would see her as more than just a best friend and the woman who managed to keep his personal and professional shit together. But the man was oblivious to her deeper feelings for him, and she wasn't willing to tell him and risk certain painful rejection. It was much easier, and safer, keeping them both squarely in the friend zone.
She'd known him for twelve years, and had truly come to believe that Mason Kincaid didn't have the ability to commit to any single woman. And it really wasn't hard for her to figure out why considering the kind of childhood he'd hadóno father figure to speak of and a mother who cared more about her next fix than her own kids. Mason might be a master at giving off a carefree, I-don't-give-a-crap attitude, but Katrina was one of the few people who knew just how much pain and resentment that laid-back demeanor really masked.
The commercial plane they were taking to Las Vegas finished the boarding process, and one of the cabin crew started closing the overhead luggage bins, while another made an announcement to set all electronic devices to airplane mode. A pretty brunette flight attendant stopped next to Mason's aisle seat and set her hand on his shoulder.
He glanced up at her, and the woman smiled, her complexion flushing a bit as he turned all that potent male sex appeal her way. Yeah, Mason had that kind of breathtaking effect on women. Between his gorgeous features, that sexy, panty-dropping smile, and his sleeves of bad boy tattoos that wrapped around both muscled arms, he was an irresistible force to the female gender.
And the jerk knew it, too, and didn't hesitate to use that charm to his advantage.