Loving the Book Presents: A Change of Address by Natalie-Nicole Bates; #SpringCountdownBlitz & #Giveaway

Let's start this off with some romantic suspense.

Natalie-Nicole Bates is a book reviewer and author.

Her passions in life include books and hockey along with Victorian photography, Frozen Charlotte dolls, and antique poison bottles. Natalie contributes her uncharacteristic love of hockey to being born in Russia.

She currently resides in the UK where she is working on her next book and adding to her collection of 19th century post-mortem photos. 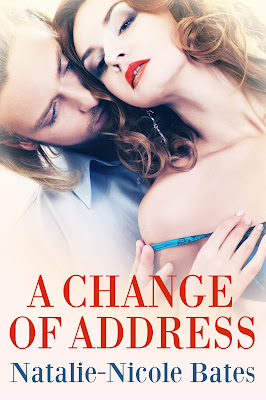 Saved from a traumatic past and successful in her present as a home care nurse, Josselyn Adler’s dream of home ownership in the idyllic town of Unity are dashed to pieces when Dr Ben Parnell, a cancer specialist, shows up on her doorstep claiming to be the rightful owner of the house—and Ben has a will to prove it!  To Josselyn, the house represents a new start in her life. With a stable home, hopefully a much wanted family wouldn’t be far behind.

After a near career-ending allegation is made, Ben has returned home to lick his wounds. But now he must prove Josselyn’s claim to be a fake, that she used her position as a live-in nurse to his sick father to ingratiate herself into his good graces. But as he gets to know her, he can tell by her shy, often standoffish behavior, that Josselyn is a woman who has been deeply hurt in her past. Although he is attracted to the dark haired beauty that has invaded his life, he is still suspicious of her true motives and her past involvement with his father.


Make sure you get your copy today:

“This is my house. Morgan Parnell left it to me in his will. Now he...” She paused and pointed at Ben. “He thinks it’s his house.”
“I have a will, too,” Ben loudly interrupted. “And mine is legitimate!”
His deep voice vibrated through her, causing her head to ache. Flustered, she pulled an envelope from her handbag. Morgan’s attorney gave to her a copy of the will a few days earlier. She handed it to Officer Smith. To her dismay, Ben also produced a document from a briefcase.
This is very bad.
She hoped Ben had been bluffing.

5.    When did you start writing, and was there a specific event or person who influenced you to become an author?
I was first a reader, then a long time reviewer, and finally a writer. I always knew since I was young I wanted to write, but after reviewing for a while, I realized I could write a book, too.

6.    Are you currently working on a project, and if so, can you tell us anything about it?