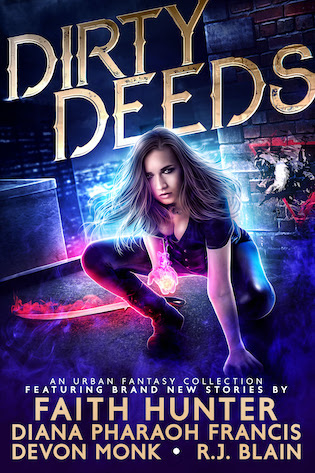 Venture into a thrilling spinoff tale from the world of Jane Yellowrock; join vacationing gods in what appears to be a quiet, ordinary town; visit a supernatural hotel where the bedbugs could very well eat you; and dive into the zany, deadly world of the Magical Romantic Comedy (with a body count) series.

In this collection of all-new urban fantasy novellas and other stories, no job is too big or too small — if the price is right.

From Devon Monk’s Sealed with a Tryst

I parked the Jeep and stared through the rain at my almost-uncle, Crow, who was actually the trickster god Raven. He was waiting just inside the mouth of the tent he’d set up in front of his glassblowing studio. As if he’d been expecting us.

“Ten bucks it’s all stolen.” My youngest sister, Jean, wore a beanie over her blue hair, the bangs across her forehead making her eyes sky bright. She had on a puffy jacket with her badge on it, just like me. Although my badge said Chief Reed and hers just said Officer Reed.

Crow wiggled his fingers at both of us. His smile was white against his russet-tan skin, and his dark hair hung past his shoulders. He’d braided that hair and added a feather earring to his outfit today. Crow feather, of course.

“I mean, sure,” I said. “At least some of that stuff must be hot. This is Crow we’re talking about. But what I can’t figure out is the whale.”

We both leaned forward to better see out the windshield.

The January wind buffeted the Jeep hard, rocking it on its springs. Rain hammered down on the metal roof like rocks thrown from the heavens. A storm front was pushing in off the Pacific. Torrential rain would hit by tonight. Then we’d see winds clocking in at sixty miles an hour and gusting to eighty.

“The whale I understand,” Jean said, as we stared at the tent. “It’s a tent, we’re a beach town. Matchy-match. But why is it that… color?”

She nodded. “Don’t get me wrong, I love me some color, but there’s something about that thing that makes me want to stab it.”

The hot pink whale flapped its obscenely large mouth, flailed its flippers, and flipped its tail like it’d just heard Jean’s threat and was trying to swim away.

But no matter what Jean or I thought about the thing, there were people moving around inside that ridiculous tent. Shoppers couldn’t resist a bargain, even in this weather.

Crow, still watching us, pointed upward with both hands.

The whale’s head was topped with a blow hole, and out of that sprayed blood red streamers. An additional banner near the startled whale eye declared: whale of a sale

“Is this an exploding whale thing?” Jean asked. “Because we weren’t the town that blew up that rotting whale in the seventies.”