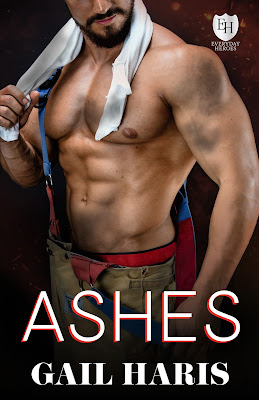 BLURB:
Gail Haris' ASHES is a hot, emotional standalone contemporary romance written in K. Bromberg’s Everyday Heroes Worlds project. Featuring Collins from Combust.
All that remains are ashes…
Fighting fires is in his blood. It’s more than a job—it’s part of who Carter Collins is. Everything was going according to plan until one fateful night. Now, with only his brothers at the Sunnyville Fire Department and his grandmother to answer to, Collins is content with life the way it is—then she comes along.
Natalia Vasquez took a position at the Sunnyville Hospital, leaving her old life behind with hopes to escape the permanent ache in her chest. When a fire destroys her apartment, a strikingly handsome and overly cocky firefighter comes to her rescue.
With no choice but to move again, Natalia isn’t thrilled to find out the heroic ass is her new neighbor.
Will the tension burning between them be enough to rekindle the ashes that smolder inside their hearts? 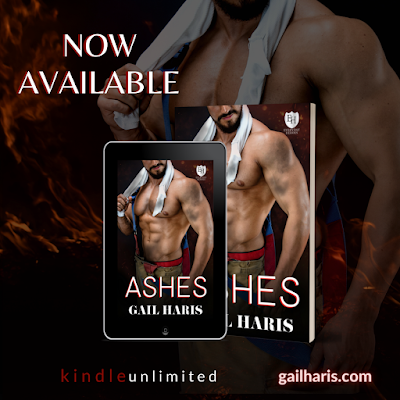 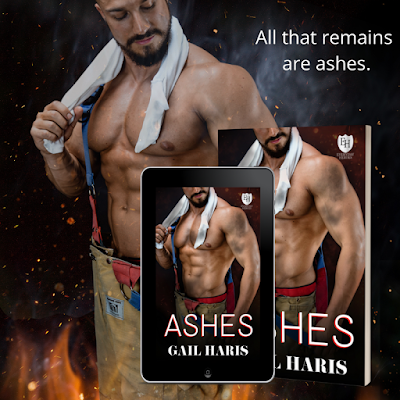 TRAILER:
EXCERPT:
Oh, God no! Poor Carter. No wonder he doesn’t want any close connections or relationships.
“I can’t believe you hadn’t heard yet. I figured it was part of the Sunnyville orientation. Most women as soon as they spot him run straight for him, and then they learn quick.”
I can’t help but laugh. “No. The first time I met him was here in the hospital, he wouldn’t even look at me. Then he saved me from my apartment fire. I was naked.”
Teagan burst out laughing. “I’m sorry. I still can’t get over that. That was horrible.”
“Yeah, you seem real shook up over my near-death experience.”
“But you’re okay!”
I roll my eyes. The call signal starts flashing for one of the rooms. “I’ll take it!” Giving her a mock frown, I groan, “That’ll give you time to recover.” 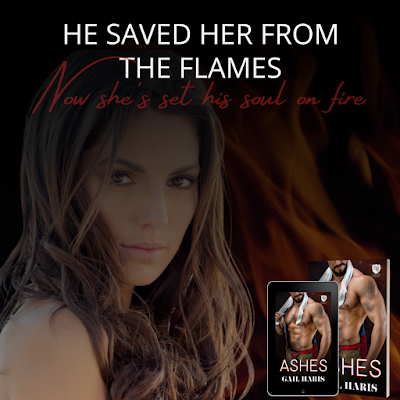 She was born and raised in a small town in Southeast Missouri. After graduating with a degree in Mass Communications, Gail married her high school sweetheart and moved back to her hometown.
She’s been on many adventures traveling across America and Europe. But her favorite adventures are the ones where she gets lost in a book.
Her love for reading and traveling led her to attend book conventions. Those conventions gave her the encouragement she needed to combine her passion for creativity and storytelling. Using coffee and her imagination, she loves writing contemporary romances that blend laughter and true love out of every day chaos. She writes in a variety of genres including, romantic comedy, romantic suspense, and new adult/ coming of age romance.
She debuted her first novel Worth a Shot, a steamy romantic comedy with a twist of suspense, in January 2020. Gail has hit the ground running and writing since. In her first year as a published author, she also released a new adult romantic suspense series – The Randalls, a three book series that follows the struggles of the Randall siblings. She also joined other author worlds such as: Corinne Michaels’ Salvation Society, K. Bromberg’s Every Day Heroes, and Vi Keeland and Penelope Ward’s Cocky Hero Club.
When Gail isn’t day dreaming in front of her computer, she’s busy raising her two daughters with her husband, who has the patience of a saint. She loves traveling with her family, binge watching television series with her husband, singing Disney songs with her daughters, and having huge family and friends get-togethers that involve lots of food and usually a cake.
She hopes by following her own dream of becoming an author, she can set an example to her daughters that dreams can become a reality. Maybe she can encourage you, too.
Never stop believing in love, dreams, and yourself. And coffee…don’t give up on coffee and books.
AUTHOR LINKS:
WEBSITE
FACEBOOK
FACEBOOK GROUP
INSTAGRAM
TWITTER
BOOK+MAIN
BOOKBUB
GOODREADS
AMAZON
NEWSLETTER
BLOG MASTER LIST 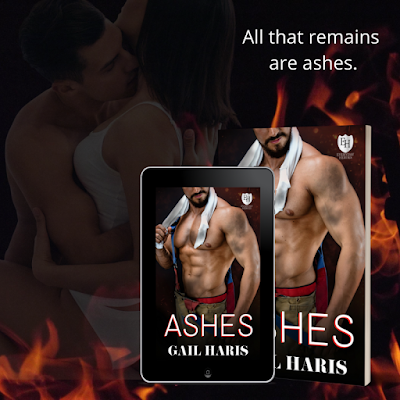