Staci Hart has a brand new rom-com standalone coming February 23rd!
Bet the Farm is a heartfelt, flirty story of opposites attract and I cannot WAIT to read it! Mark your calendars and pre-order your copy today! 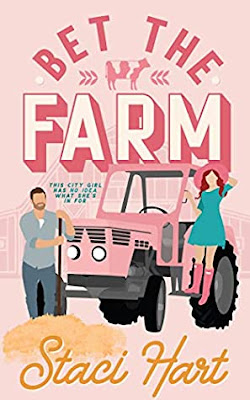 An unbidden laugh slipped out of me, and she softened at the sound. Her eyes traced the lines of my face with an unfamiliar emotion behind them. It was a sort of fondness, an admiration.

“I love it when you laugh. You never laugh. Or smile. Has anyone ever told you you have nice teeth?”

“Wouldn’t you know—that’s the first thing anyone says about me,” I teased.

With a laugh of her own, she tried to bump me with her hip, but because she was drunk, she just sort of fell right into me. For the second time in ten minutes, Olivia’s body was flush against mine.

But this time it wasn’t just the sweet scent of her that I noticed. It was the length of her dark lashes, the endless depth of her eyes. It was that smart little nose and the valley that connected it to her lips. Those lips were full and wide, with a bow so deep and sharp, it looked like it’d been carved there by a sculptor. I could have counted the smattering of freckles on her cheeks or the creases in those plump, rosy lips, which parted just a little. Just enough for me to capture one if I tried.

Olivia Brent has one summer to save the dairy farm she just inherited.

But there’s one problem, and it’s not her lactose intolerance.

The brooding farmhand has inherited exactly fifty percent of Brent Farm, and he’s so convinced the city girl can’t work the land, he bets she can’t save it in a summer.

Determined to prove him wrong, Olivia accepts what might be the dumbest wager of her life.

His strategy to win seems simple: follow her around, shirtlessly distracting her between bouts of relentless taunting. And it’s effective—if his dark eyes and rare smiles aren’t enough to sidetrack her, the sweaty, rolling topography of the manbeast’s body would do the trick.

What they don’t know: they’ll have to weather more than each other.

Mysterious circumstances throw the farm into disarray, and with the dairy farm in danger, Olivia and Jake have to work together. But when they do, there’s more to fear than either of them imagined.

Because now their hearts are on the line, and the farm won’t be the only casualty if they fail.

Staci has been a lot of things up to this point in her life -- a graphic designer, an entrepreneur, a seamstress, a clothing and handbag designer, a waitress. Can't forget that. She's also been a mom, with three little girls who are sure to grow up to break a number of hearts. She's been a wife, though she's certainly not the cleanest, or the best cook. She's also super, duper fun at a party, especially if she's been drinking whiskey. When she's not writing, she's reading, sleeping, gaming, or designing graphics.