Seven Nights of Sin is the stunningly sexy and heart-tugging conclusion to The Two Week Arrangement, both available now!


About Seven Nights of Sin:

Things went further than they should have, but I don't have any regrets. Well, maybe just one . . .

I went and did the one thing he told me not to--fall in love with him.

Now I have seven days to prove my trust and devotion. Turns out money is a powerful drug, but love is even more addictive. 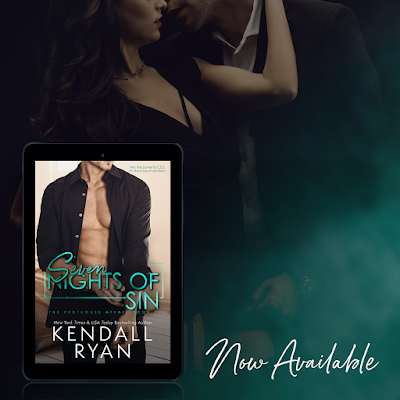 Dominic Aspen can’t figure out what’s happened.  Presley Harper has regrets and is having to live with the consequences.  One reason to read The Penthouse Affair in order is because there’s a major secret that gets revealed here.  Besides the fact, it would be like reading the ending first.  The story is older man and younger woman.  It’s not something that you’re constantly reminded of but you can see that even Presley thinks about the differences.  I also like the two people in her corner – her brother Michael and her friend Bianca.

Plus, if you haven’t read the first book than you won’t know who Roger is and why he’s important to the flow of the story.  There are also two little cutie patooties that are also important.  I could see them as my nieces.  They’re ones that completely light up the room but the sad part is that you don’t see them all that often.  One thing these two do is to show how much of a heart Dominic actually has – it was hard to see at times.

One thing I liked about this story is that Presley seems to have him a little off-center.  He seems to be all about business and needs a reminder that there’s more to life.  In a way I could relate to Dominic.  I had a father that at one time had four jobs.  Men do what they have to in order to provide for their families.  His kids are too young but older kids may take things for granted and not realize the sacrifice parents make so that we get to have fun and even go on vacation.

Our author makes this world seem so believable.  I can certainly see Dominic ruling his domain with an iron fist.  That is until someone comes in to shake the foundation.  There’s someone else trying to shake what he’s worked hard to build.  We need a little mystery and suspense to shake things up.  You can’t have everything seem predictable because then we wouldn’t want to turn the page.  In some cases even giving up on the story and then going on to something else.  The author always gives her readers that certain something that keeps our fingers at the ready to turn the page.  I was sad that the ending came but glad that I got a sneak peek.  Then I think do I or don’t I – do I want to leave it as a surprise or not.

Start the Duet with The Two-Week Arrangement

A New York Times, Wall Street Journal, and USA Today bestselling author of more than three dozen titles, Kendall Ryan has sold over 2.5 million books and her books have been translated into several languages in countries around the world.
Her books have also appeared on the New York Times and USA Today bestseller lists more than 70 times. Ryan has been featured in such publications as USA Today, Newsweek, and InTouch Magazine.