Taming the Princess
by Alyson Reynolds 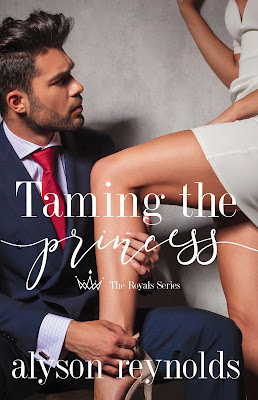 Princess Scarlett Marion is broken. Drugs, sex, alcohol—she uses everything possible to numb the pain from her past, but it never seems to help. When Lord Carrick Trudeau pays her dowry, she finds herself in a position she never thought possible. He’s older, darker and seems to know exactly what to do to make her feel amazing, not like the broken little girl she actually is. 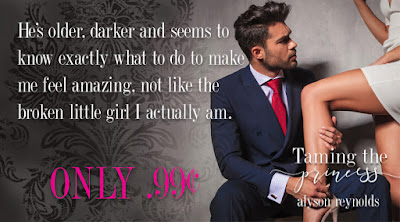 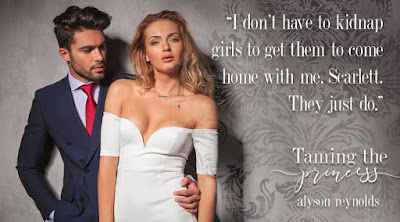 The rush of the high hit me quickly, making my blood sing in my veins. My body shook, not just from the drugs, but from the pounding bass and strobe lights filling the club around my group of friends. Juliet swayed to the music freely next to me, urging me to want to follow her lead. Hands brushed over my body, making my skin prickle from her touch. I couldn’t tell if I wanted it to stop, or if I wanted more. My guard stood by the doors, leaving me to self-destruct all by myself. This was how I wanted it and none of them would dare interrupt my fun.
The press had been aching to follow me into the club since I passed through the doors earlier this evening. Eventually, someone would make it through all the security, and inevitably there would be yet another story of my depraved behavior, which would sell papers. Of course there would be; I didn’t want to disappoint my fans. I giggled at the thought. My father hated me because of the messes I made, my mother didn’t know what to do with me, and my sister was disappointed in my horrible choices. It was just a normal day in my world.
A strong arm wrapped around my waist, pulling me back against a hard chest. At first I didn’t resist the feeling of this stranger against me. Random sex with someone in the bathroom sounded entertaining. Juliet would probably want to watch. The arm tightened against my ribs.
My eyes shot open, but none of my friends were there. They had all abandoned me, but who knew how long ago that had been.
“Let go of me!” I protested. “If you knew who I was, you wouldn’t be manhandling me without asking first, you asshole.”
The chuckle that followed surprised me. “I’ll do whatever I damn well please, little girl. And I know exactly who you are, Princess Scarlett.”
That dark, smoky voice sounded familiar. I looked over my shoulder and dark obsidian eyes met my ice blue ones, pinning me in place. Bright lights from the club flashed over our bodies as I studied him. I shivered again, but this time Lord Carrick was the cause of it; certainly not any illegal substances I may or may not have taken.
I smirked. “What are you doing here, Lord Carrick? I didn’t think this was your scene anymore.”
His jaw tightened. “It’s not, and it won’t be yours either.”
I turned to face him, placing my hands on my hips, and narrowed my eyes. “You don’t get to decide that, now do you?”
He leaned in and ran his nose over the shell of my ear as he spoke, making a shiver run up my spine. “Oh Princess, you have no idea what I get to decide now.” This encounter was getting odder by the second. Surely he didn’t mean that the way it sounded. “It’s time to go, and I would prefer you don’t make a scene.”
His voice was calm, but I heard the warning in it loud and clear.
“If you want me to sleep with you, all you have to do is ask. It doesn’t matter to me that you’re almost twice my age. You’re still incredibly sexy,” I said, running my hands up his chest. “I like silver foxes, and you definitely qualify as a silver fox.”
He gave me a wry smile. “Believe me, I’ll fuck you blind soon, but it won’t be in this club. Or any club, for that matter.” I gasped as he reached down and grabbed my ass, pinning me up against him. “Now let’s go, Scarlett. We have a long drive ahead of us and I want to get there before morning.”
I swallowed hard and attempted to glare up at him. “What the hell are you talking about? I’m not going anywhere with you.”
The knowing look on his face made my heart race. He started dragging me behind him without answering my question, completely ignoring me. My guard wasn’t coming to my rescue either. Were they really going to let this man kidnap me? What in the hell was going on? I took a step back and stumbled as I tried to yank out of his hold. His grasp on my wrist tightened, steadying me before I was able to fall to the ground. The last thing I saw before the blackness crept over my vision were his dark, enchanting eyes. 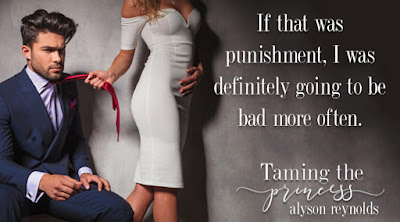 Enter to win a signed paperback copy of Taming the Princess and a personalized tote:

Originally from the south, Alyson likes to incorporate what she knows into her books. She's lived not only on the east coast, but the west coast and a few places between. Alyson loves sharing stories about her crazy family to anyone who will listen. Her guilty pleasures consist of coffee, country music, brunch, breaking the rules, and pedicures. And she will always be a daddy's girl.

When Alyson isn't chasing around her two kiddos, she's normally writing. Or reading. Her Kindle library is out of control. Alyson writes mainly contemporary novels and novellas with a few new adult stories is the mix.

Posted by Lynn's Romance Enthusiasm at 11:15 AM