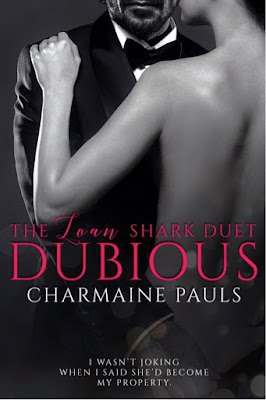 Repulsiveness personified, that’s me. I own a mirror, and I’m not afraid to look in it. What you see on the surface is a reflection of what runs under my skin. I’m a loan shark. Breaking people is in my blood. The Haynes’s were supposed to be a straightforward job. Go in and pull the trigger twice. One bullet for Charlie, one for his sister. But when I saw Valentina, I wanted her. Only, in our world, those who owe us don’t get second chances. No way in hell will my mother let her live. So I devised a plan to keep her.

(DUBIOUS is the first full-length novel in a two-part duet and ends on a cliffhanger. The second book, CONSENT, will be available on 14 November 2017. This is a dark romance with a criminal anti-hero and forced seduction. Reader discretion is advised.)

The table goes quiet, but not because of my outburst. The men’s heads are turned toward the landing on the upper floor. When I follow their gazes, I can’t miss the man who stands under the light, his hands gripping the rail. He wears a dark suit, like the Portuguese, but he’s anything but a generalization. He’s nothing short of a monster.
His body is muscular. Too big. There’s not enough space in the room for him. He drowns everything in power and dominance. He’s not young, but he isn’t old, either. Rather than defining his age, his years give him the distinguished edge of men with experience. Thick, black hair falls messily over his forehead, the wisps brushing his ears. His features are rogue, wild, and uncompromising. The lines running from his nose to his mouth are deeply etched. They’re the kind of lines men with hard, rough lives wear. A ghastly network of scars runs from his left eyebrow to his cheek. Under the disfigured patchwork, his complexion is tanned. The ruggedness of his skin gives the impression of being marred by bullets. A short-trimmed beard and moustache cover some of his imperfections, but the damage is too vast to hide. It’s a face you don’t want to see in the dark and definitely not in your dreams. It’s a face that stares straight at me.
Heat of the scary kind crawls over my skin. When I look into his eyes, it’s as if a bucket of ice is emptied down my shirt. An unwelcome shiver contracts my skin, and my fear turns from hot to cold. His irises are blue like the far-off glaziers I’ve only seen in pictures. Everything about him seems foreign. Out of place. Dangerous. He’s the kind of bad that’s even out of Napoli’s league.

Charmaine Pauls was born in Bloemfontein, South Africa. She obtained a degree in Communication at the University of Potchestroom, and followed a diverse career path in journalism, public relations, advertising, communications, photography, graphic design, and brand marketing. Her writing has always been an integral part of her professions.
After relocating to Chile with her French husband, she fulfilled her passion to write creatively full-time. Charmaine has published ten novels since 2011, as well as several short stories and articles. Two of her short stories were selected for publication in an African anthology from across the continent by the International Society of Literary Fellows in conjunction with the International Research Council on African Literature and Culture.
When she is not writing, she likes to travel, read, and rescue cats. Charmaine currently lives in Montpellier with her husband and children. Their household is a linguistic mélange of Afrikaans, English, French and Spanish.

SaveSave
Posted by Lynn's Romance Enthusiasm at 9:30 AM