Disclosure of Material Connection:  I received this book for review from Ardent Prose PR and the author. I was not compensated nor was I required to write a positive review. The opinions I have expressed are my own. I am posting this in accordance with the Federal Trade Commission's 16 CFR, Part 255: "Guides Concerning the Use of Endorsements and Testimonials in Advertising".

play·boyˈplāˌboi/nouna wealthy man who spends his time enjoying himself, especially one who behaves irresponsibly or is sexually promiscuous.Synonyms: socialite, pleasure seeker.

Noah
I have it all, money, looks, and any woman I want.Till I meet her and my universe is knocked on its ass and she wants nothing to do with me.Kaleigh
My motto: never date the same man twice. I have less chance of breaking my heart that way.Till my eyes land on the only man I’ll break my rule for.She thinks she can run. That I’ll let her get away.He thinks he can handle a woman like me.He has no idea.A man who has it all needs one thing and one thing only. A temptress.Watch me Tempt the Playboy. 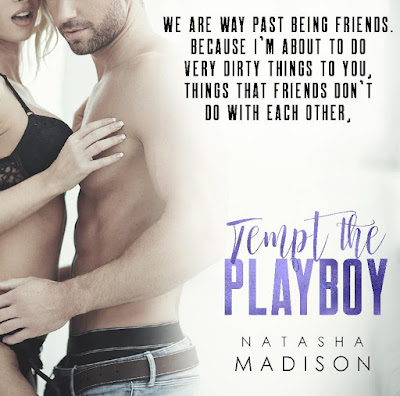 Kaleigh knows what her sister needs – if I had a sister I’d hope she’d be like Kaleigh.  Noah King is a man who seems very superficial.  It’s interesting that I’m reading this at the same time of the Harvey Weinstein scandal.  It can give you a different perspective of the type of man that Noah could be – this could be a disservice to both the book and the author.  But it was hard not to make comparisons.

As I start to get to know Noah, I don’t know if he has any redeeming qualities.  We’ll just have to wait and see.  I may be on the fence about our main characters but I have no trouble warming up to the author.  The good news is she’ll get you to laugh.  The bad news is that I had jury duty on the day I was trying to concentrate on this book.  Some slightly good news is that this book, at times, made my time in the jury pool a little more bearable.  But more bad news is that I was easily distracted and had a hard time getting back into the story.  Kaleigh’s sister’s book came out first and I did have to wonder if it would have been better to read Tempt The Boss first and than read Tempt the Playboy.

Our couple got hot and heavy pretty early in the book and it just felt as if it was just sex – didn’t feel any type of heat.  I had a hard time picturing them as a couple.  Noah on one hand appears to be intelligent but on the other he seems to be missing a few brain cells.  It was hard not to think that Kaleigh could do better.  Although she seems to be a little challenged in the cooking department.  I think this was one time that I’m glad a book doesn’t have smell-a-vision.  But the mood lightens with the descriptions that Noah uses – gave me a good chuckle.

When you can’t connect with the characters, it makes for a tough read.  It also allows outside noises in.  That made me sad because I had high hopes for this book.  The sad part was that I had the same experience once I got home where I could control those outside noises.  Now this was just my experience and yours could be different.  What I would probably do is go back and read book one and if I can get through that then I would attempt to read this book again.

SaveSave
SaveSave
Posted by Lynn's Romance Enthusiasm at 9:30 AM