Seven is an enigma. A motorcycle club princess. The daughter of a notorious gangster. The best friend of the deputy mayor. A coffee shop owner. The single mom of two young, adopted children. She’s colorful, in every way possible—from her attitude to her piercings and bright pink hair—and she’s a woman on a mission with the power to help broker a clean break between a powerful motorcycle club and a South American drug cartel. But not all players are ready for the game to change, including the ones she can’t see like the CIA.
Jax Michaelson has a bad attitude and a good shot. The former Navy SEAL has been on Titan’s problem list for running his mouth since the day he showed up for work, but he does a hell of a job, and they’d never let him go. Call him cocky, that’s fine, because then you’d have to admit he’s the best at anything and everything—except diplomacy.
When Titan is forced into the seedy drug world filled with cartel glitz and Harley-riding MCs, Seven and her family become an unexpected bargaining chip right after she and Jax find a way to stand each other—in bed.
Will friends become lovers? Or are they too far gone to be opposites that attract? Is Jax nothing but a bad boy who leaves her hoping for a military hero when the burden of living as Mayhem royalty backfires and her children disappear.

JAX is a standalone romantic suspense novel by New York Times bestselling author Cristin Harber. It features characters from the Titan, Delta, and Only series, but readers do not have to have read those books to enjoy this one. There's a guaranteed happily ever after and no cliffhanger! Enjoy!

Get your hands on JAX now! 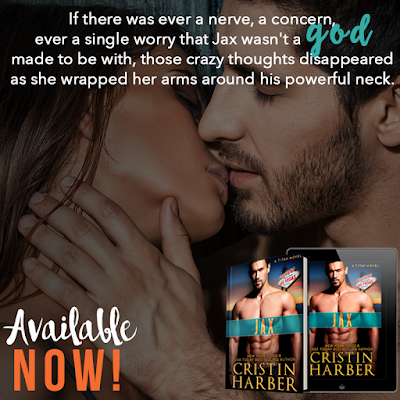 "If our… bad decisions are raw and honest, this"— he pointed between them—" could be killer."

A waterfall of reactions cascaded through her senses.

"Or we hold back." Jax's jaw flexed, displeased with the possibility. "We'll have decent sex. Come hard. Earn a round of applause, and walk away without a memorable detail."

His eyes narrowed. "Asking for what you want. Getting what you need. Giving because it's good."

"That doesn't sound like any bad decision I've ever heard of."

He tore his shirt over his head. "Come here, Seven."

The air evaporated from the room. Oh God, a shirtless Jax in real life was superior to any passing fantasy. Her nipples beaded as she drank in the visual of his tan skin and dark eyes, gaping as if she'd not seen a half-naked man before. Perfection didn't exist, and Jax was living proof of that with an old scar on his stomach and short, wider ones above his chest. Dark, close-clipped hair colored his pecs, and a smattering of hair led a path down his toned stomach. There were more stories torn, stitched, sliced, and healed into his body than she might ever know.

"I would've gone to you, even if you kept your shirt on."

Inches separated them. "Sometimes it's better to hedge bets."

A reddening laughter broke her enthralled trance. "I'm not sure what to think of that."

Seven took a deep breath and obeyed. Jax moved behind her, tucking her hair from one side to the other shoulder, and goose bumps jumped at his touch. She sucked a quick breath, muscles tightening.

"Relax." His fingertips drifted from her shoulders down her arms. The fine hairs on her skin reacted, standing upright in the wake of his touch. "That happened at the wedding."

Eyes still closed, Seven shivered at the memory and loosened under his exploring touch. "I remember."

"Do you like when I touch you?" He traced over her skin until every hair stood erect and her unsteady breaths bordered on quiet pants.

Meaning? Raw honesty. Seven could feel the tremor of need build deep in her body, pulsing to her pussy and beading her breasts. "I liked holding on to you. Hiding under your jacket. Your back is…" With her eyes closed, it was like she could feel her fingers playing with his dress shirt at Victoria's wedding. "Muscular."

Jax squeezed her shoulders, massaging back to her arms. "Was that so hard?"

The warm fullness of his lips connected with hers, and Seven's eyelashes fluttered, so lost in the memory of their time at the wedding, she hadn't realized he might kiss her. If there was ever a nerve, a concern, ever a single worry that Jax wasn't a god made to be with, those crazy thoughts disappeared as she wrapped her arms around his powerful neck.

His tongue teased her lips apart, and he took her weight, tipping her head for more. Seven hadn't been kissed like this in her lifetime, and as he teased her, stroking her tongue, testing her lips with nips and licks, she clung to him, moaning for more. 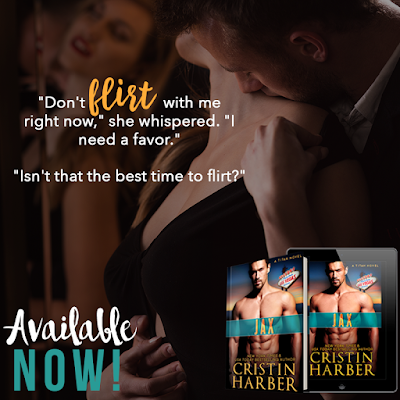