Easton Wylder is baseball royalty. The game is his life. His passion. His everything.

So, when an injury threatens to end Easton’s season early, the team calls in renowned physical therapist, Doc Dalton, to oversee his recovery. Except it’s not Doc who greets Easton for his first session, but rather, his daughter, Scout. She may be feisty, athletic, defiant, and gorgeous, but Easton is left questioning whether she has what it takes to help him.

Scout Dalton’s out to prove a female can handle the pressure of running the physical therapy regimen of an MLB club. And that proof comes in the form of getting phenom Easton Wylder back on the field. But getting him healthy means being hands-on.

And with a man as irresistible as Easton, being hands-on can only lead to one thing, trouble. Because the more she touches him, the more she wants him, and she can’t want him. Not when it’s her job to maintain the club’s best interest, in regards to whether he’s ready to play.

But when sparks fly and fine lines are crossed, can they withstand the heat, or is one of them bound to get burned?

Easton “East” Wilder seems to be a cocky S.O.B.  Scout Dalton gives as good as she gets.  It was fun to watch these two annoy each other after he first lays eyes on her.  If you love watching baseball, this is coming out at the perfect time since the season is just getting started.

Scout’s job hits home for me because my dad was an R.P.T. and I’d like to think he would be impressed if he had met her.  I’d also like to think he would approve of her regimen she has set up for her client.  I can also relate to Easton.  Part of my life mirrored his – had to step away from the book for a little bit because it brought back some very sad memories.  Then our author pulls me from my thoughts by getting me to laugh.  This author knows just what will get her readers interested in her stories.  You can relate to what the characters do or what their lives are like.

I did love the fact that she didn’t lead these two into bed right from the beginning.  And you can tell that they may not be thinking with their heads as they enter into a relationship.  But in a way I have to understand where Scout is coming from.  If it weren’t for my father’s job he might never have met my mother.  My mother hated my father when she first met him.  Easton and Scout may not have hated each other but the similarity was a little eerie.

I will say that at times there were scenes that didn’t seem real. Scout is a woman working in a man’s world and you would think that she would fight a lot harder for that position and weigh her risks by what she’s getting involved with. But then you have to remember that this is a work of fiction and this is the world that the author has created. Don’t expect to get any answers when the ending finally comes. The only thing it does do is get the reader ready for the second book. 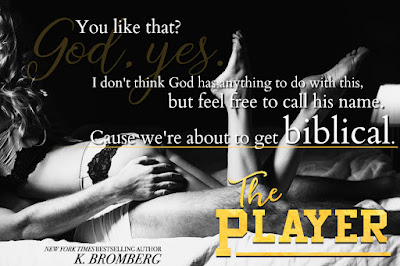 New York Times Bestselling author K. Bromberg writes contemporary novels that contain a mixture of sweet, emotional, a whole lot of sexy, and a little bit of real. She likes to write strong heroines, and damaged heroes who we love to hate and hate to love.

A mom of three, she plots her novels in between school runs and soccer practices, more often than not with her laptop in tow.

Since publishing her first book in 2013, K. has sold over one million copies of her books and has landed on the New York Times, USA Today, and Wall Street Journal Bestsellers lists over twenty-five times.

In April, she’ll release The Player, the first in a two-book sports romance series (The Catch, book 2, will be released late June), with many more already outlined and ready to be written.