This week, Entangled Publishing has been celebrating The Best Book Boyfriends Ever by shining a light on some of the heroes on Embrace! Today I’m joining in as we salute the military book boyfriends!

Authors Ophelia London & Cole Gibsen shared their thoughts about writing about men in uniform. Entangled has all of the Embrace stories with military heroes on sale for just 99¢, today only!

Is your hero inspired by a real-life person? If so, who?

Ophelia London (author of Abby Road & Crossing Abby Road): Actually, my hero, Todd, is very, very roughly based on a mix of my college boyfriend and the fantasy I wished he'd been back then. Hee-hee. I started dreaming up this story a few years after 9/11, so I KNEW Todd needed to have served in the military.

Cole Gibsen (author of Seared on my Soul): I'm the executive director of a charity that places PTSD service dogs with veterans. I wouldn't say Reece was inspired by a particular veteran, but rather the struggle I've witnessed so many of them going through.

What other kinds of heroes do you like to read about?

Ophelia: Basically any of them! But currently, I love to read about powerful men: the businessmen: strong silent type that appear to be all business, but deep down have a gooey heart of gold. And if they have an accent, whooo baby!

Cole: I'm seriously a romance junkie, so when it comes to heroes, I don't discriminate. I love them all.

She knew. That’s why Mom hadn’t opened the door. She knew Dad was dead. Twenty years as an army brat and Ember Howard knew, too. Her dad would never be coming home. Then Josh Walker enters her life. Hockey star, her new next-door neighbor...and endowed with the most delicious hands that have a way of erasing her pain with a single touch. But just when Ember lets him in, Josh’s secret shatters their world. And she must decide if he’s worth the risk that comes with loving a man who could strip her world bare.
Get Full Measures: https://entangledpublishing.com/full-measures.html

Since her sister's death, Paisley, who shares her sister’s heart condition, is treated like glass by her parents. But nothing will stop her from completing her Bucket List—even if it kills her. And it almost does, until Jagger pulls her from the ocean and sets her soul on fire. Jagger is wickedly hot, reckless, and perfect for a girl living life to the fullest. Except Paisley is the commanding general's daughter and her boyfriend is Jagger's biggest rival. One wrong move, and they could crash and burn…
Get Eyes Turned Skyward: https://entangledpublishing.com/eyes-turned-skyward.html 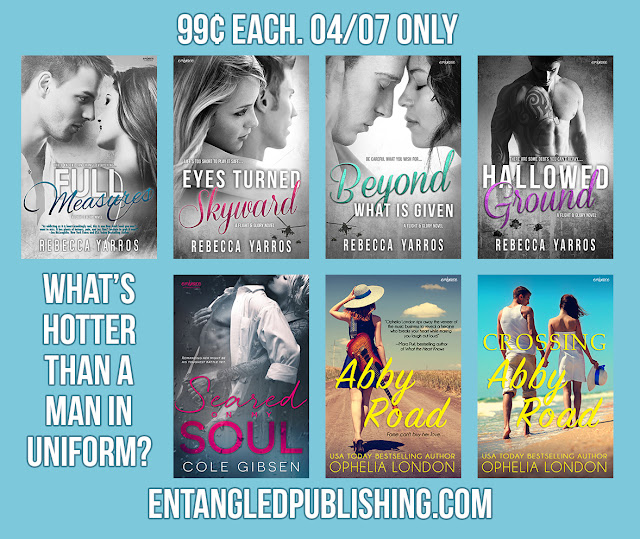 Beyond What is Given by Rebecca Yarros
Fight & Glory #3

The last thing Lt. Grayson Masters needs is the distraction of his gorgeous new roommate, Samantha Fitzgerald. While her smart mouth and free spirit are irresistibly irritating, he can’t deny their off-the-charts chemistry—or her ability to pull his focus away from his Apache helicopter course. Sam has no business digging for Grayson’s secrets while she’s hiding her own, but that doesn’t stop her from trying to tear down his walls. Each barrier she busts through drops one of her own, though, and she’s not prepared for the truth…
Get Beyond What is Given: https://entangledpublishing.com/beyond-what-is-given.html

Josh Walker is loyal, reckless, and every girl’s dream. But he only has eyes for December Howard. Together they have survived grief, the military, distance, and time. As Josh heads to Afghanistan, a country that nearly killed him once before and took Ember’s father, they fill their last days together with love, passion, and plans for their future... If there’s one thing Ember has learned from her father’s death, it’s that there are some obstacles even love can’t conquer.
Get Hallowed Ground: https://entangledpublishing.com/hallowed-ground.html

Reece Montgomery never planned on being anyone’s hero, especially the foul-mouthed, bleach-blonde barista from the local coffee shop. He thinks there’s more to Emily Garret than her tattoos, and lip ring, but getting close means letting her into his past and meeting his ghosts.
Get Seared on my Soul: https://entangledpublishing.com/seared-on-my-soul.html

It's been exactly one day since rock star Abby Kelly fled her chaotic life. One day without her demanding manager, papparrazzi, ridiculous tour schedules, and recording sessions. But all it takes is one twist of fate— to enter a stranger's surf shop while trying to dodge some fans—for everything to change. When Abby meets Todd, an ex-Marine sniper turned surfer, she feels things she hasn't felt for a long time. Possibly never. But when the real world comes crashing back in, Abby is caught between the superstar she's become...and the painfully real human being she longs to be.
Get Abby Road: https://entangledpublishing.com/abby-road.html

Todd Camford went from Marine sniper to owning a beachfront surf shop in Florida. He's a free-flying, unfettered hawk, and relationships outside of family are out of the question. And then she comes into his shop. Everyone knows who Abigail Kelly is—mega rockstar, tabloid fixture. He'd be an ass (or possibly insane) to think he can resist her. Just for today, maybe he'll keep an eye on her to make sure she doesn't get mobbed. Because really, how much damage could one day with a super-hot, kick-ass celebrity really do?
Get Crossing Abby Road: https://entangledpublishing.com/crossing-abby-road.html


Posted by Lynn's Romance Enthusiasm at 9:30 AM